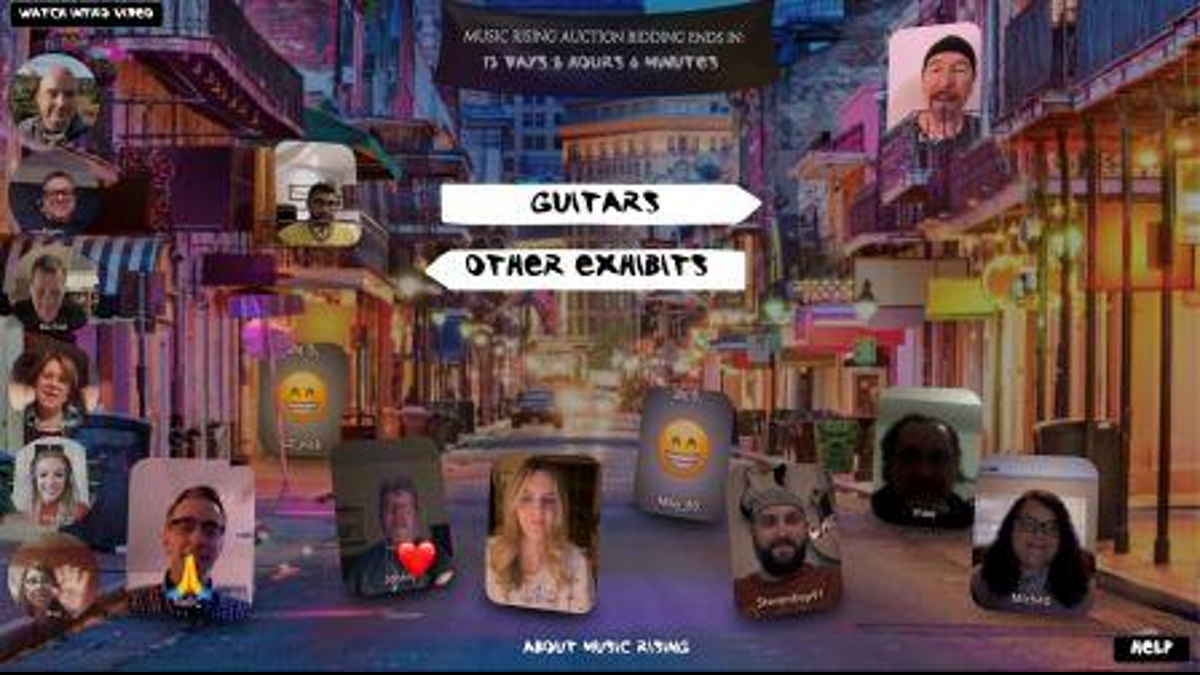 The virtual exhibition space and auction bidding gallery will showcase over 30 legendary musicians and their instruments, featuring exclusive performances and never-before-heard stories filmed in the artists' homes and studios.

Ohyay, a virtual event platform, has partnered with the charity Music Rising to launch a first-of-its-kind guitar viewing gallery in anticipation of "Guitar Icons: A Musical Instrument Auction to Benefit Music Rising" on December 11th.

Music Rising was co-founded by U2's The Edge, producer Bob Ezrin, and a host of music industry partners in the wake of Hurricane Katrina to aid musicians regaining their livelihoods. The "Guitar Icons" auction will take the charity back to its roots by supporting musicians in New Orleans who have been impacted by the pandemic.

The immersive virtual space will act as an exclusive event partnered with the auction catalog, showcasing over 30 guitars donated by Bono, Lenny Kravitz, Tom Morello, Paul McCartney, Slash, and Elton John, among many more of the world's most prominent musicians and friends of Music Rising. The virtual environment will pay homage to Music Rising's founding mission by allowing visitors to explore virtual New Orleans landmarks, such as Bourbon Street, Preservation Hall, and the New Orleans Jazz and Heritage Foundation.

Take a seat on The Edge's living room couch and learn about his custom Strat, which he played on tour with U2 from 2017-2019. "Artists have gotten together to sell guitars and other rock n' roll paraphernalia to raise money for the music and culture of New Orleans, the birthplace of jazz and R&B," he says. Stay as long as you want, but please, no feet on his coffee table - he's just painted it :)

Join The Beatles' bassist Paul McCartney on the rainy streets of London, where he showcases his maple, elder, and mahogany Yamaha bass. Click on the street sign to view a photograph of him playing the guitar with Stevie Wonder in 1981, during the "Tug of War" recording sessions.

Step into rainbow-colored lights flashing across Coldplay's "Mylo Xyloto" tour stage and watch Chris Martin play the chords from "God Put a Smile on Her Face" on his painted fender telecaster deluxe. Up close, you can see that the street art-inspired guitar is a vibrant artwork in itself and a piece of Coldplay's overall stage presentation.

Get an inside look into Tom Morello's studio, where he has rehearsed, recorded albums, scored films, and jammed with his kids. Hear about the guitarist's involvement with Music Rising and the guitar that he played on his latest album, "The Atlas Underground Fire." "We're stepping up for a city that we all love and that is so culturally important to the history of music," he says.

Dive into an undersea cove to reach Eddie Vedder's concert-smashed Lake Placid-Blue Fender American Special Telecaster. You can also bid on signed posters, a ukulele, and a hand-illustrated tambourine.

Music fans and collectors interested in the live auction on December 11th will be able to access 360 degree views of the hand-picked instruments, learn the stories behind them, and watch performances filmed exclusively for the virtual experience. They can also purchase new and limited edition Music Rising merchandise from the exclusive virtual gift shop.

"With ohyay, we've created communal, experiential, and inclusive virtual spaces for music fans around the world. We're excited for people to experience an online auction like never before and connect with their favorite artists on a new level," said U2's The Edge, Co-founder, Music Rising.

Anyone can join the ohyay experience and invite their friends along. Head here starting today until January 1, 2022.