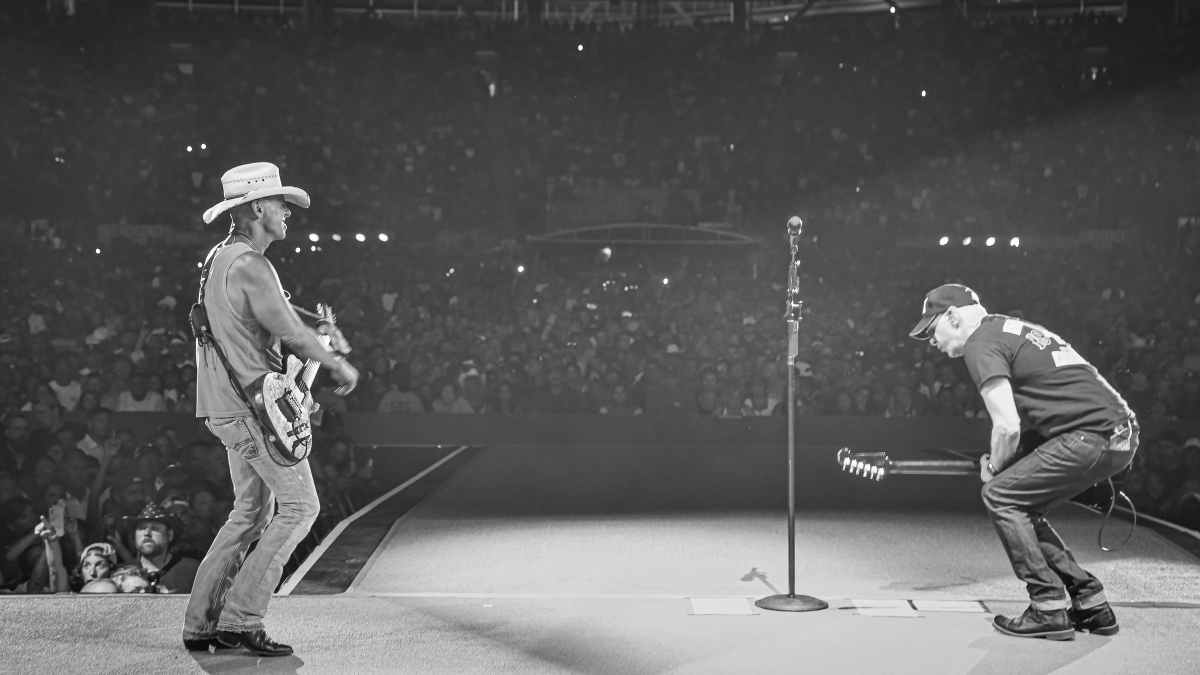 (EBM) Kenny Chesney beat his own attendance record at the MetLife Stadium in East Rutherford, NJ when his Here And Now 2022 tour landed at the venue this past Saturday, August 13, 2022 and Kenny played to a crowd of 59.999 fans. EBM sent over these details:

Eleven years ago to the day, Kenny Chesney took the stage at MetLife Stadium - and rocked with everything he had. It was a magic night, one he'd never forget, and one that has defined what makes a great show over the last decade.

With a blast of pure energy following two major postponements, a new name and a different lineup, the Here And Now 2022 Tour roared into the home of the New York Giants and the New York Jets as Chesney set a new bar for - and with - the 59,999 members of No Shoes Nation on hand to celebrate the return of the man the Wall Street Journal deemed "the King of the Road."

"Some places just come to be in the music," Chesney said after the show. "MetLife blew our minds 11 years ago, and they came even harder tonight. To hear them sing those songs, to rave the way they did; they raised the bar once again. As a summer I couldn't imagine keeps coming, everyone onstage knew this was one for the books even as the show was going down."

From the all-as-one voice intoning "Some say it's a bitch, it's a bummer/ We need a rock & roll show in the summer/ to let the music take us away..." during the night's second song "Reality," it was obvious the crowd had come to throw their cares into the brink. That song tumbled into a double-timed "Here And Now," as No Shoes Nation melted into a mass of celebration after four years since the eight-time Entertainer of the Year had been here.

Having played the venue in 2011, 2012, 2013, 2015, 2017 and 2018, Chesney's seventh MetLife appearance saw him set yet another personal best for attendance. It also saw key members of the Jets, Giants, Yankees and ESPN organizations in the house for what was clearly a high intensity performance.

With red, white and blue United States and tangerine and white University of Tennessee flags dotting the Sandbar, No Shoes Nation swept "American Kids" into overdrive - taking the last line as their own as the athletic showman leaned forward to take in their passion. After a full 30 seconds of cheering, Chesney then led the crowd in a bonus chorus that concluded "A little messed up, but we're all alright."

Wearing Stone Pony t-shirts, a lei hanging from Harmoni Kelley's bass during "No Shoes, No Shirt, No Problems" and Danny Rader breaking out a double-necked guitar for "Get Along," the vibe onstage was loose and the playing intense. Telling the packed house about tour traditions, Chesney stopped "When The Sun Goes Down" and brought video director Jay Cooper onstage for a very grindhouse feeling "Happy Birthday;" handing him a supersized margarita as the audience took the party to another level.

"You live these songs," Chesney marveled. "You come to these stadiums and see the faces, share the moments and it becomes your life, my life. It's why I like to say No Shoes Nation is the most passionate place on earth. No matter what we throw at the people who come out, they bring it back to us with just as much heart and just as much fire. Whether it's a birthday or 'There Goes My Life,' the people who come out come with everything they've got - and I am so grateful for it."

Four more cities, four more stadium shows - and Here And Now 2022 will be complete. Presented by Blue Chair Bay Spirits and fueled by MARATHON, Chesney, band and crew can't believe it's almost over. "We waited for so long, and you wish it could go on and on."