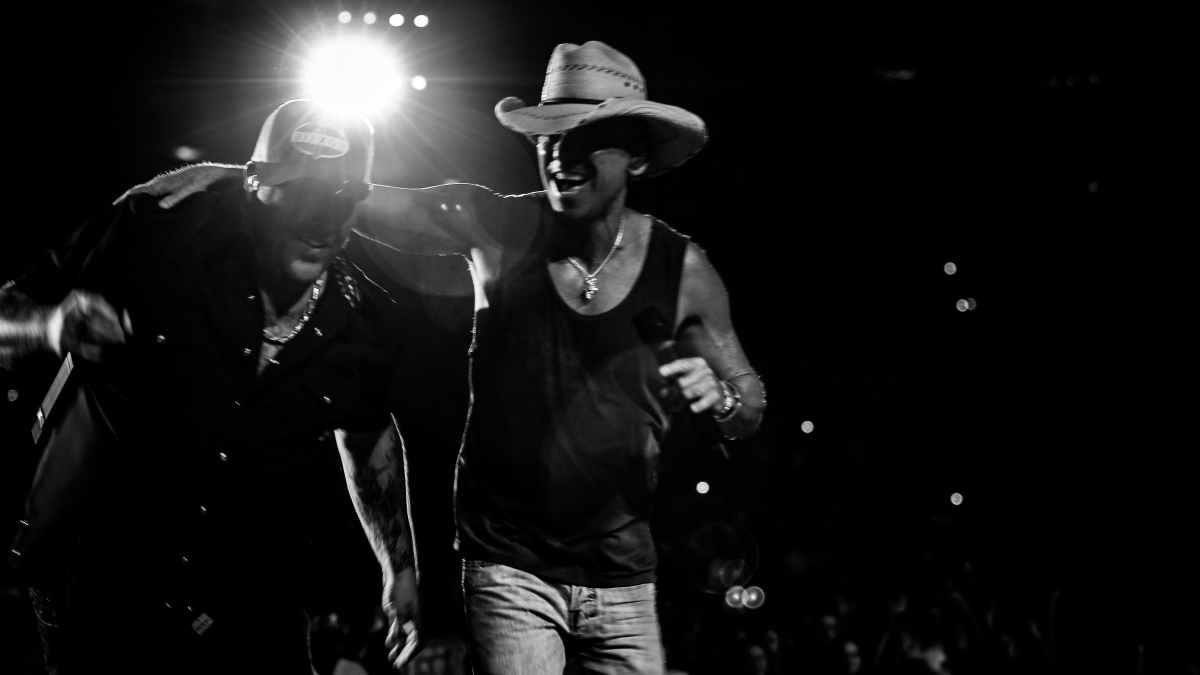 (EBM) Kenny Chesney has always played hard in the Rust Belt, having launched his stadium-sized juggernaut in Pittsburg, Chicago and Detroit. When Chesney took the stage at Ford Field for the 11th time this weekend he came proper and delivered one hour and 55 minutes of some of country music's biggest and most enduring hits of the 21st Century.

"Tonight was so magical," he began after the full-tilt performance. "From the second song in, we just felt it up there. It was obvious... and when it happens like that, there's no way to describe it! To be that alive and in the middle of all that energy is something you can dream about..."

From the moment Chesney walked on stage, arm lifted high in a toast to Motor City, he was met with wave upon wave of intense applause. The extended "KCDC" guitar jam that closes his set-opening "Beer In Mexico" saw all four guitarists streaming down the catwalk and across the T to the crowd's delight - and that musical force cascading straight into "Reality," "'Til It's Gone" and a double-time "Here And Now."

With the 49,725 crowd at times singing every word as loud - or louder - it was a catharsis as much as a party vibe. Certainly the songs of renewal and good fun - "We Do," "Get Along," "Summertime" - set a vibrant tone for the first half of the show.

Bringing out co-writers and Old Dominion's Matt Ramsey and Brad Tursi for the heartbreak-jettisoning three week #1 "Save It For A Rainy Day" took the crowd to another gear. The perspective shift was evident; but nothing prepared the crowd when Chesney announced, "Detroit, Michigan..." after the first verse of "When The Sun Goes Down."

Clad in a black oversized bowling shirt, sideways truckers cap and loose-fitting black pants, Uncle Kracker emerged from the wings to take his version on their pair's six-week No. 1. Laughing, falling into the rhythm as their crowd erupted even louder by what was clearly a surprise, the two artists reminded everyone the power of chemistry and friendship.

"It's been eight years since we sang together," Chesney marveled. "But it was like we never left it. And once we got him out there, I don't think anyone - especially the band - wanted him to leave. So, we just kept going, and had a big time with 'Follow Me' and 'Drift Away.'

"It was that kind of night. Everything built on everything else, such focused love and passion. We could feel it all onstage, and it felt like Detroit, Michigan felt it coming from all of us, too."

Just one more city, only two more stadium shows - and Here And Now 2022 will be complete. Nineteen weeks, 21 stadiums, multiple personal bests and a whole lot of No Shoes Nation played to, it's hard to believe it's almost over.

Presented by Blue Chair Bay Rum and fueled by MARATHON, Chesney, band and crew are still gathering momentum and hitting new peaks with each show. Foxborough, Massachusetts better get ready. For the birthplace of No Shoes Nation, Chesney's 19th and 20th show at Gillette Stadium are gearing up to be - like so many of the shows this summer - the best one yet.