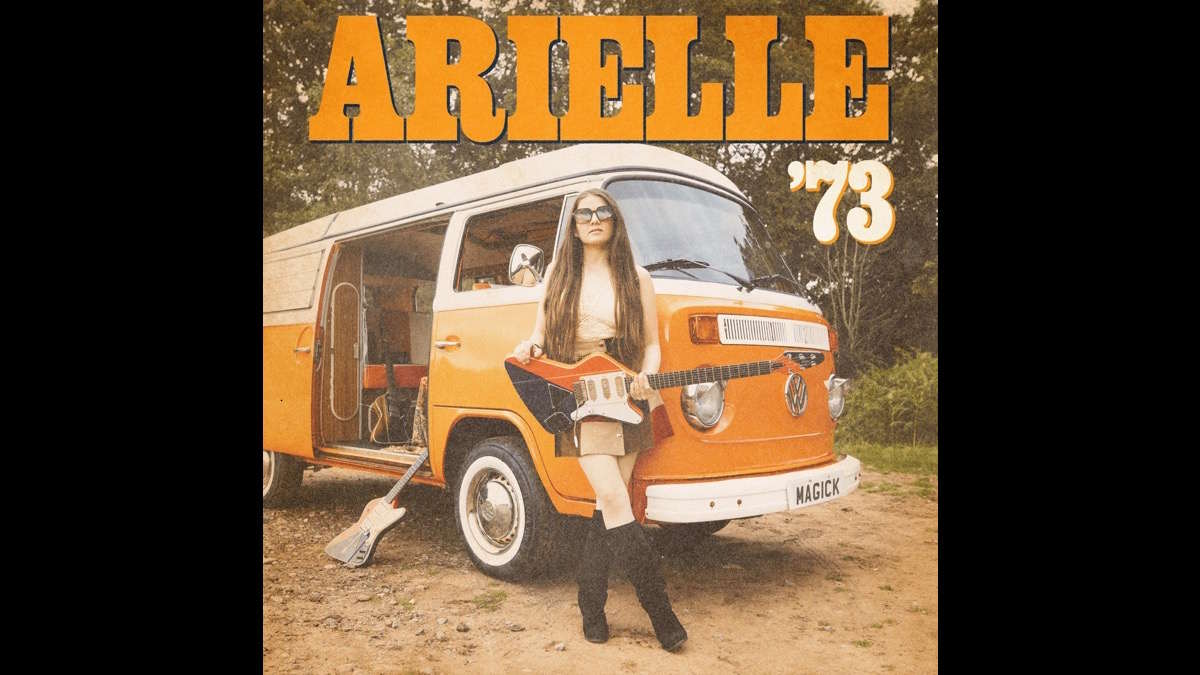 (Noble) Award-winning American singer-songwriter and guitarist Arielle has released a music video for the title track to her new studio album, "'73", which will be released on April 20th.

The new album is a sentiment of love and an ode to her personal 1973 Volkswagen Bay Window Bus that Arielle lovingly refers to as Magick - a celebration of its 50 years of existence.

Mixing classic rock, the songwriting of the sixties, wanderlust, and plenty of The Who inspired guitar, Arielle's new studio album is set to stun. "I bought my bus because every time I step into it, I feel like it's a time machine," says Arielle. Every time I step in, it takes me back to '73."

The album features her brand-new BMG Arielle in cherry red; manufactured by Brian May Guitars. The first quantity of the BMG Arielle guitars sold out in 90 minutes. Due to popular demand, for the very first time, the BMG Arielle will be available in limited edition solid cherry red colour.

"To understand why this guitar was irresistible to me, you need to hold her in your hands," says Arielle. "The guitar is light, and smooth and agile. The BMG Arielle sings like a bird."

"Arielle's guitar playing reaches places I never knew existed," says Brian May. "I believe this guitar will do the same."

Arielle is a young woman born in a different generation. As a child of the new millennium, Arielle has often faced depression, versus the music boom and creativity that emerged in the 1960s and the 1970s - a time where things were done by hand, with a level of craft that could not be hidden behind technology.

The Dulcet
A symphony of Brian May-esque guitars welcoming you into an effervescent experience for your ears.

Somewhere Slow
The modern world is faster than ever. It's not often we take the long way to our destination. This Led Zeppelin inspired track reminds us to take our time and smell the roses.

'73
It's the title track of the album, and a love song to my 1973 VW bus. I'll pick you up in my time machine and take you back to 1973. Fast paced, slide guitar. '73 will have you checking your speedometer more than once.

Goes Without Saying
A paradoxical break-up song of things assumed in life, the sun sets at night, the tides will ebb and flow, but our love goes without saying a word.

Weakness For You
This song is like a warm breeze blowing through the Arizona canyons. Trying to enjoy the scenery at the journey you're on, while being almost haunted by the presence (and weakness) of that particular someone.

Kalypso
"I have been trying to out-write my instrumental Take II for almost a decade. A taste of Jeff Beck & some funky grooves, this banger covers a ton of rock guitar ground.

I Need An Angel
A desperate cry for help in a moment where life feels entirely alone.

That's Just Lonely
In life, temptation sometimes cloaks itself in opportunity and sometimes even love. This is the internal dialogue of the proverbial angel and devil on the shoulder.

The Other Side (Let The Sun Set Down)
When one door closes, another door opens. When one life opens, another one opens. But letting go of it is sometimes scarier than anything.

If
This is a cover of one of my favorite songs of all time by David Gates from the band Bread. When the end of the world comes, I would still want to be loving you.

Wherever We Go From Here
I based this song from The Who's "This Song Is Over." None of us can predict life, although we do our best to control the outcome. But wherever we go from here, I just want to know I'll have you with me.