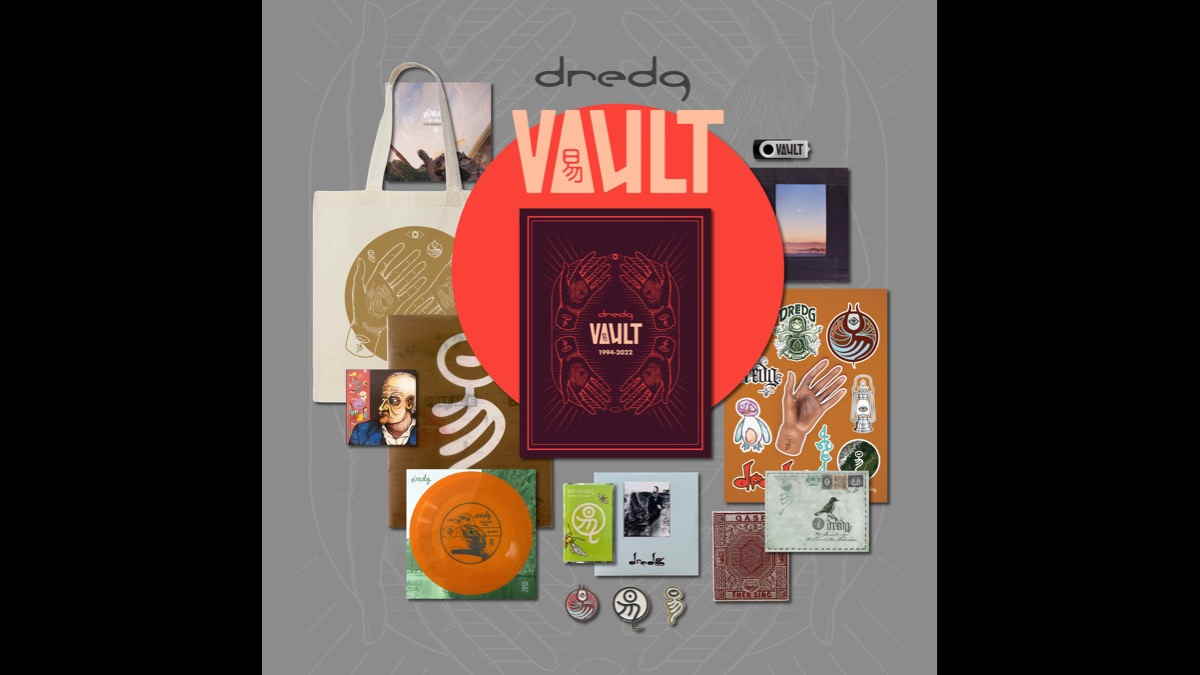 (ABC) dredg are following up their "El Cielo" 20th anniversary box sets, that sold out within hours, by opening their Vault with a very limited collection of previously unreleased and recently sourced works of art, music, video, and relics spanning 28 years' time.

On Thursday, December 1 at 10 a.m. PT, it will be available on the band's online store, dredgvault.com, with all proceeds going towards funding the new dredg album, which is set for release in the new year. The centerpiece will be a beautiful hardcover 10"x13" signed, numbered, and personalized 340-page hardcover book encapsulating the entire career of the band, from childhood to today. Each vault is delivered in a custom artwork printed box personalizing the experience from the moment it arrives.

It will feature re-releases of early music, unreleased documentary studio footage, and a plethora of memorabilia from throughout their career. Some of the items include collectors pins from multiple records, a custom patch and postcards of THE PARIAH, THE PARROT, THE DELUSION cover artwork from their 2009 album, a making of EL CIELO DVD (beautifully designed DVD digipack with original artwork containing a one-hour documentary about the making of the album with raw never-before-seen footage (filmed primarily and edited by bassist Drew Roulette), CHUCKLES AND MR. SQUEEZY masks and dolls from their 2011 album, an art and lyric book crafted by singer Gavin Hayes, flexi vinyl custom 7" art for an unreleased track "Halong Bay," a repressing of the band's ORPH EP (not available on CD since 1997), an instrumental Casio MIDI version of the entire album CATCH WITHOUT ARMS by Dino Campanella, custom dredg tote bag, custom new sticker sheet containing stickers of various logos and extras, and a storyline zine of the band's debut LEITMOTIF album.

"THE dredg VAULT is an unburied treasure," proclaims the band. "The original idea of the VAULT was to finish the scrapbook to include all of the eras of dredg from 1993 to now and also touch on our future as a band and release it as a hard-covered book. From there, it grew into an amalgamation of eccentricities. Beyond our discography, we've created a gathering of other fantastic artifacts, spanning from a storyboard for a LEITMOTIF film, to a cassette reimagining our CATCH WITHOUT ARMS record, but played on an old Casio keyboard. It is experiencing dredg in an alternate universe, but it also unravels the band's true essence and sheds a light never before seen."

As bassist Drew Roulette continues, "Imagine sneaking into your favorite artist's house while they slept to steal a treasure chest full of unreleased and unfinished projects spanning their whole career. Things that should never see the light of day and things that have always yearned for a release, but never had a proper platform. It's 28 years in the making, but for the last three years, we've been deeply designing THE dredg VAULT with Ben Henderson at the design firm, Brush House. This is a must-have for any dredg connoisseur.

In new music news, dredg has been hard at work on their sixth album which will be released in the new year. They've been writing on and off the past few years and are now knee-deep in the process. As Campanella describes, "To me, this album sounds like a more mature incarnation of dredg, which comes from the obvious reason that we are older now, having stepped away from the collective craft for quite some time. This gap in time has given us a newfound appreciation for not only one another, but also for this work of art we've created together and have the ability to create indefinitely. Please don't let the word 'mature' deter the reality that dredg continues, in my opinion, to sound as ambitious and far reaching as ever. Our tastes are clearly fine-tuned and there's no shortage of our classic desire to be weird as f***."