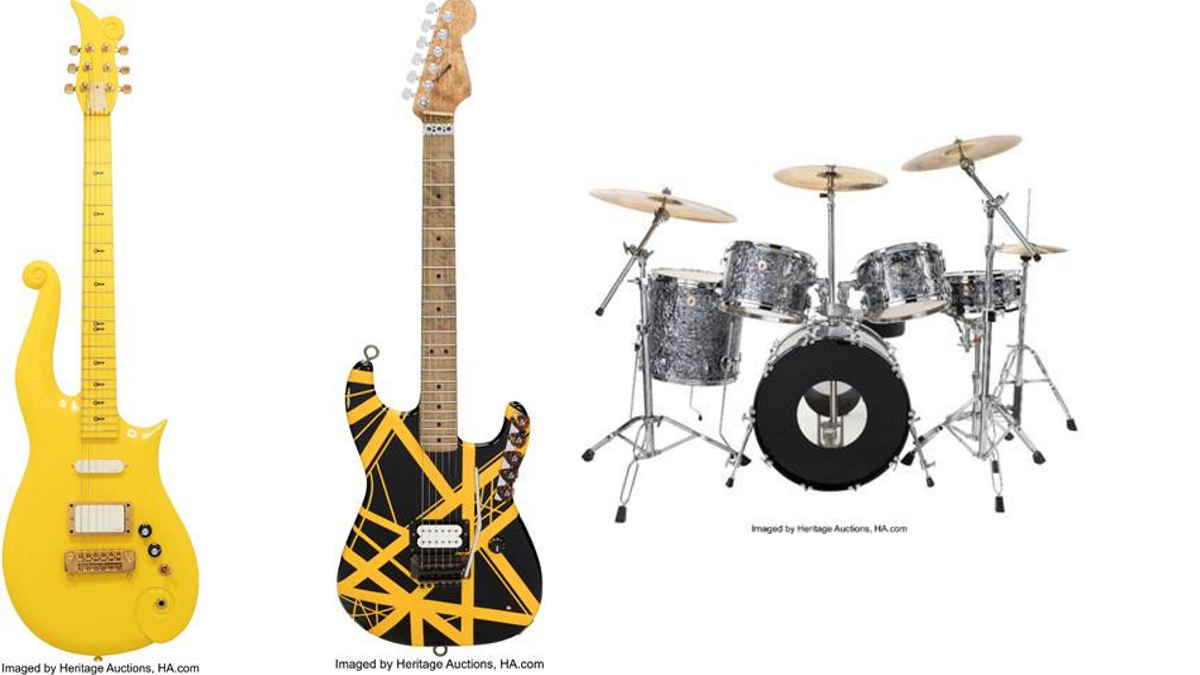 If you play guitar, you remember that moment you first sat down and played The One. It may not have been yours, or even a guitar you played more than once. But it seemed to be made especially for you: a specific Stratocaster's perfect weight; a Les Paul's breathtakingly smooth action; a 335's luscious neck curve; a Telecaster's incredible growl. The One felt like an extension of your own hands and your own creative impulse, and you knew that if only it were yours, you'd make beautiful music together and live happily ever after.

Jimmy Page, Prince, Eddie Van Halen, Jeff Beck: These legends all have their own such stories, their own sense of what makes a guitar feel like home. And they went on to such stardom that almost every guitar they played was made to their specifications, most often in the custom shops of Gibson and Fender. These guitars' amazing sound was a given - and the look, too, was far from an afterthought. On Nov. 13, Heritage presents an auction packed with custom guitars that reflect the range of preferences and beauty that musicians are deeply familiar with - the personalized touches that put a guitar in perfect harmony with its player.

"This is a unique auction, and it stands out due to the variety of custom and vintage guitars that shaped the music we grew up on," says Aaron Piscopo, Heritage's Director of Vintage Guitars & Musical Instruments. "We have an especially rich selection of guitars from Gibson's custom shop in Tennessee, from vintage to extremely rare limited editions overseen by our guitar heroes. There's tremendous history here."

Two guitar collections based on special releases from Gibson's custom shop in Memphis lead this auction. The collection of David Winters, whose career spanned 30 years working at Gibson Guitars (including as the custom shop's longtime GM), is remarkable for both its vintage and newer Gibsons, and includes rarities such as a 2006 Gibson 3/PU/prototype sporting three pickups, as well as three "Government Series" guitars - these are Gibson guitars made with the exotic-wood guitar parts confiscated in 2011 from the company's Tennessee factories by US federal agents, and later returned. Upon that return, Gibson released 750 instruments made with the targeted ebony and rosewood, which quickly sold out, and then released around 1,000 more, which sold out in minutes. Here, the SG, Les Paul, and ES-335 sport a distinct gun-gray metal finish.

The Tangen Collection of custom, mint Gibson guitars epitomizes a hallmark of the industry: limited-edition reproductions of the custom guitars of rock's most legendary players. This is how mere mortals can experience what geniuses rely on to make their music, and in this case we mean Jimmy Page's Black Beauty Custom Les Paul, Don Felder's "Hotel California" 1959 Les Paul V.O.S. Sunburst, Eric Clapton's Beano Les Paul Sunburst, and Jeff Beck's Les Paul Oxblood V.O.S. - the last is part of the Gibson custom shop's INSPIRED BY series in a run of only 150. All come with their cases and COAs. The Tangen Collection also boasts a number of time-capsule reissues of early collector favorites, such as a 2012 Gibson "The Babe" Les Paul Sunburst built to the exact specs of an original late 1959 Sunburst Les Paul with a factory-installed Bigsby, and a 2009 50th Anniversary Limited Edition 1959 Reissue Les Paul Golden Cherry Burst.

Speaking of Jimmy Page: This auction features a special two-fer that the Led Zeppelin maestro himself oversaw every detail of in its production and distribution: a 2019 Fender Masterbuilt "Dragon and Mirrored" Telecaster set. These are hand-painted and signed by Page; the set is one of only fifty produced. Also: The dearly missed Eddie Van Halen signed several guitars in this auction, each emblazoned with Eddie's beloved and distinctive stripes, including a 2019 EVH '79 Bumblebee black and yellow solid body - it's an exact recreation of Eddie's Bumblebee handcrafted by master builder Chip Ellis and in unplayed condition.

To remind us of how all this electric-guitar charisma originally grabbed the admiration and imaginations of Clapton & Co.: No notable instrument auction could be complete without a solid baseline of remarkable vintage guitars. Two such beauties stand out here: A 1959 Gibson ES-335 Sunburst with its T FON number, small '58 frets and a larger '59-style neck profile and original PAFs. Despite its vintage, it comes with its original hang tags, paperwork and sales receipt. It's joined in this auction by a 1963 Fender Stratocaster Sunburst, pre-CBS, with its original Selmer hardcase and hang tags. The neck date is August '63 B and the body date is 9/63. The pots date to the 24th week of 1963 and the wiring is all-original.

While Prince could make any ax purr, he had a master builder create his ever-recognizable Paisley Park guitars. To the delight of players and non-playing fans alike, featured here is His Royal Badness' circa-1990 Yellow Cloud guitar. Built by Andy Beech of D'haitre Guitars while under contract with Paisley Park Studios, this is one of a total of Prince's 27 Cloud guitars. This Yellow Cloud features the Prince logo on the fret board and neck, and comes with a letter of authenticity from Jenifer Carr, Director of Operations at Paisley Park Enterprises, stating that this guitar was used by the High Priest of Pop in performances and rehearsals.

Guitar players may be the showy stars of rock, but we all know that the drummers drive the genre: In 1994, Rush drummer Neil Peart - arguably the best rock drummer of all time - lovingly organized a tribute album to his hero, drumming great Buddy Rich, called Burning for Buddy. In this auction Heritage presents Peart's 1990 Ludwig 5-piece drumkit that he used on the album.

"Recreating the feel and licks of Buddy Rich, it was the beginning of Neil starting over with his approach to playing," says Piscopo. "Opting to use a traditional grip on his sticks and working with Freddie Gruber, it was proof that one of the best drummers could drastically redefine his playing."
After the recording, the dark pearl-finish kit was gifted by Peart to a dear longtime friend. The kit includes a kick drum, snare, two toms and a floor tom and custom Zildjian cymbals - and for a truly personal touch, comes with multiple heartfelt letters from Peart to our consignor. As Peart, his friend, and the rest of us know: music is the gift that keeps on giving. Rock on. Find more details here