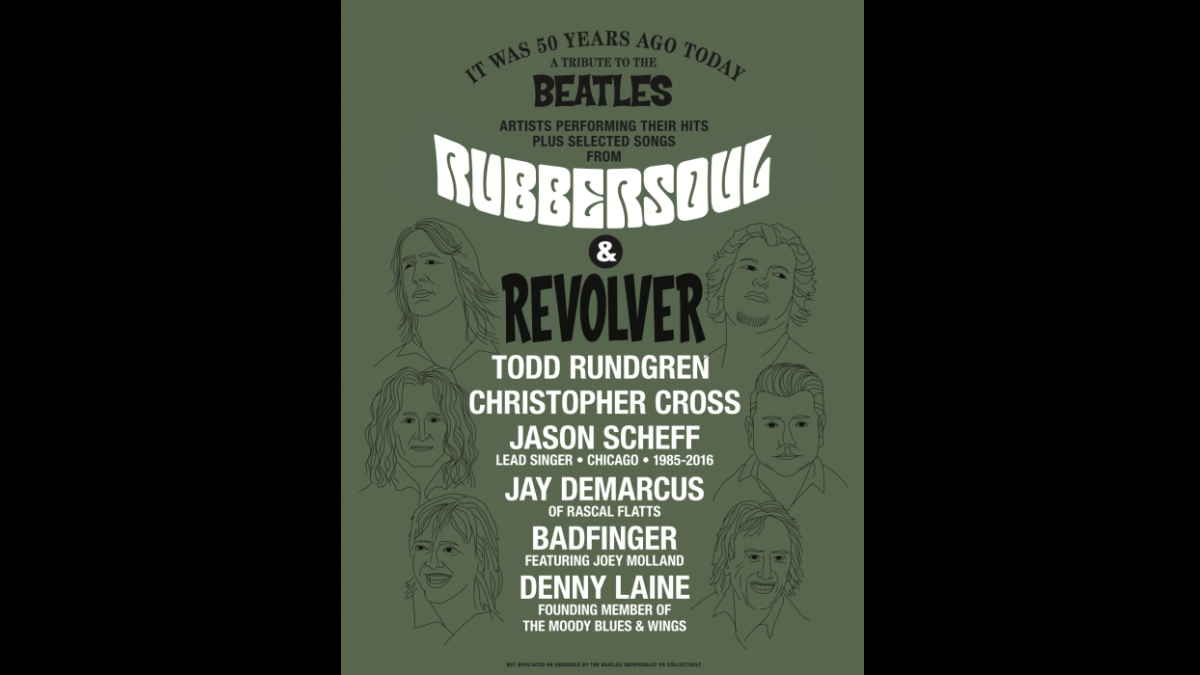 (Glass Onyon) The It Was Fifty Years Ago Today: A Tribute to The Beatles starring Todd Rundgren, Christopher Cross, Joey Molland, Jay DeMarcus, Denny Laine and Jason Scheff will be hitting the road this spring.

It Was Fifty Years Ago Today: A Tribute to The Beatles starring Todd Rundgren, Christopher Cross, Badfinger featuring Joey Molland, Jay DeMarcus of Rascal Flatts, Denny Laine (founding member of The Moody Blues and Wings), and Jason Scheff (Chicago's lead singer from 1985-2016)! These legendary artists will be performing their hits plus selected songs from The Beatles' albums "Rubber Soul" and "Revolver".

Hear classics like "I Saw the Light", "Hello It's Me", "Sailing", "Ride Like the Wind", "No Matter What", "Go Now", and more alongside Beatles classics! Says producer Toby Ludwig, "Flower Power concerts has been doing Beatles tributes featuring some of the greatest voices and musicians available for over 20 years now, creating a unique experience that can be shared by all. The songbook of these albums should be our best one yet."

"This time we thought: Wouldn't it be great if we played the best songs The Beatles ever recorded for a change? 'Rubber Soul' and 'Revolver' are the boys peaking in front of our eyes and redefining what pop music would be for the foreseeable future. This is going to be fun." - Todd Rundgren

"It's always a pleasure playing these classic songs with great artists and friends. Please come join us." - Christopher Cross

"The Moody Blues met the BEATLES in the early 60's and were invited to join them on their second British tour. The thought of performing some of their classic songs with such a revered cast on this tour will bring back not only those moments in time but also fond memories as a member of WINGS. I trust that we will pay due credit to their timeless legacy by bringing back that music to everyone who joins us for this special ride." - Denny Laine

It Was Fifty Years Ago Today: A Tribute to The Beatles Tour dates

More tour dates to be announced.