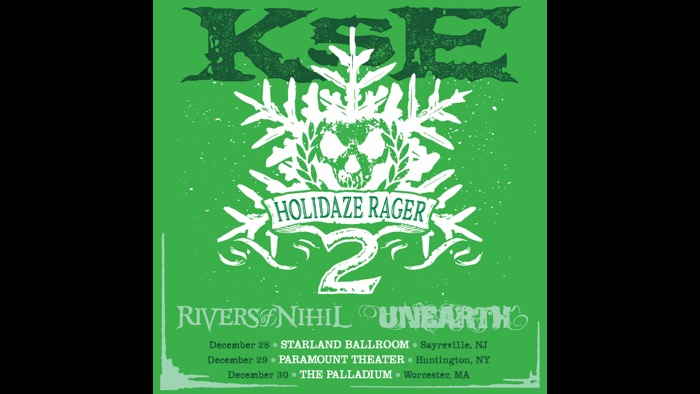 Killswitch Engage have announced the details for trio of holiday season shows that they are calling Holidaze Rager 2 that will feature support from Rivers of Nihil, Unearth, and a third act to be announced..

Holidaze Rager 2 will include stops at the Starland Ballroom in Sayreville NJ on December 28; at The Paramount in Huntington, NY on December 29; and a hometown show at The Palladium in Worcester, MA on December 30.

Frontman Jesse Leach had this to say, "It's been a while since we've been able to do a holiday show so let's fix that. We are stoked to announce these three 'holiday-themed' shows, which will surely be fun and maniacal. Expect things to be out of control and crazy!

"It will be rounded out by the prolific - and a band favorite - with Rivers of Nihil, as well as our old school friends in Unearth. The sets, the stage, and the vibe will be like no other Killswitch show you have seen! This will be a perfect send off for us as we head into the studio for our new record! Let's do this my friends!"