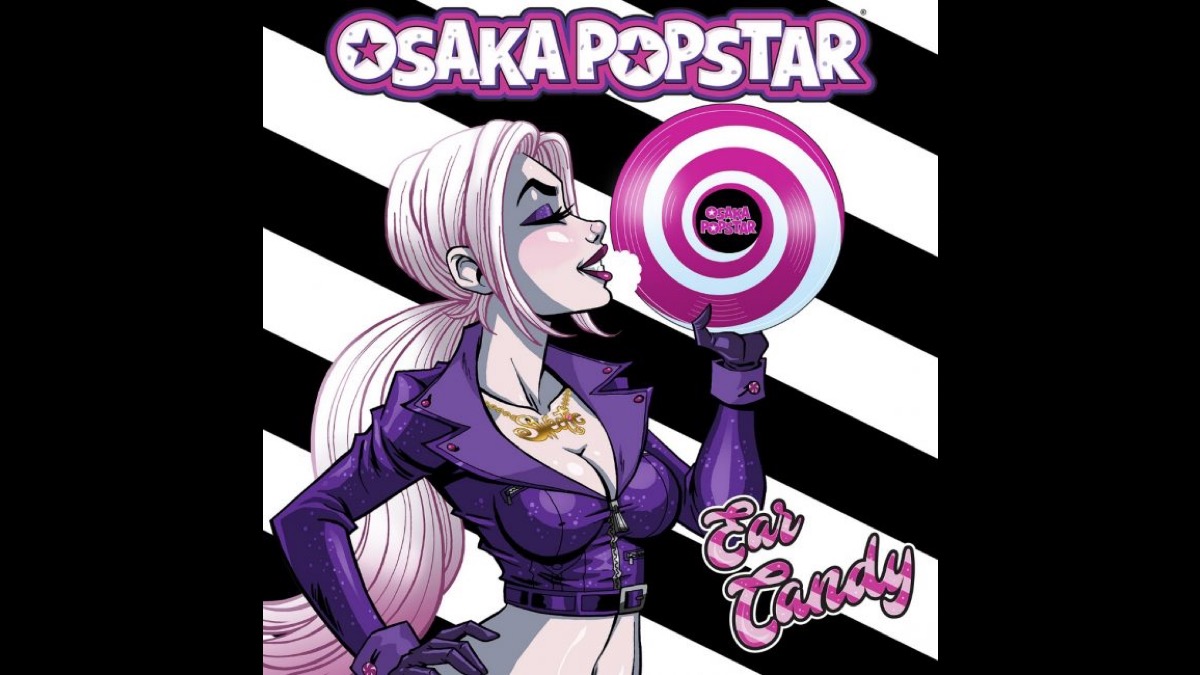 SRO sent over the following details, followed by a special Q&A with John Cafiero: The music video was written, produced and directed by Osaka Popstar's frontman and longtime Misfits and Ramones collaborator John Cafiero.

The cartoonized video stars actor/comedian/musician Fred Armisen (Portlandia, SNL, Documentary Now) as the main character, a lost and lonely soul seeking out an unattainable love, all while paying homage to Saturday morning breakfast cereals, the Partridge Family, the Archies and the Monkees-all of which are artists Osaka Popstar cover throughout Ear Candy. See the Q&A below:

Q: Congrats on creating the "Lost & Found" animated video, which you wrote, produced and directed. What inspired you to take this approach and why do you feel it's the best visual to represent the song?

Cafiero: "Thanks. I'm a bit of an art junkie, and over time, have amassed an extensive roster of surreal characters in the Osaka Popstar universe. I like to weave them into the fabric of what we do, and animation is an excellent outlet for that. In fact, to date, every Osaka Popstar music video has been fully animated. The irony here being that initially, I was planning to do this particular video in live action, but the more time passed, it eventually evolved into a fully animated video.

Although I have a background producing and directing live action, I'm a former animator as well, and I've always loved the medium. There are no limits, no boundaries, and anything can happen beyond the confines of reality. I love making the impossible possible and spinning things into surreality tends to be a lot of fun.

I think the video distills the core of the song into terms everyone can relate to, but in a fun and entertaining way, while simultaneously capturing the vibe of not only the song itself, but Osaka Popstar generally-and the new record. I'm thrilled with how it turned out, and I hope others enjoy it as much as I do when they see it. So far, the reaction from those who've seen it has been amazing, and the guys in the band were blown away by it."

Q: In creating the video, were there any challenges and how did you handle them?

Cafiero: "Some of the challenges were ensuring my key concepts would be realized within the storyline, and also ensuring we captured not only the likenesses, but the essence of everyone that was transported into animated form. Not to mention, wrapping it all by the record's release date, while living up to my high standards and expectations. I'm genuinely passionate about everything I do, and I believe that's the key to making it all gel in the end. The process is fun, but it's hard work and involves a lot of hours and extreme attention to detail. I tend to be relentless in ensuring the end result lives up to its full potential, and I think we accomplished that with this video, in a fairly quick turnaround time too."

Q: The video stars the animated Fred Armisen. Can you tell us about how you know Fred and what inspired you to ask him to use his likeness in the video?

Cafiero: "Fred and I have mutual friends and met briefly at the first Misfits reunion show in 2016. On the flight home, we ran into each other at the gate in the airport. As fate would have it, our seats were assigned right next to each other on the flight, and we've kept in touch ever since. I've always liked his work, and we have a lot of common interests. His favorite bands are my favorite bands, (bands who would turn out to become an integral part of my life and career), and we've both been huge John Waters fans from an age many would consider too young to have seen his films. John jokingly once told me he could have been arrested for me seeing Pink Flamingos when I did!

The basic premise of the video was inspired by real life events! I was waiting in my car parked outside of a supermarket in NYC, and a guy in a business suit passing by, stopped at the picture glass window of the storefront and, while gesturing to someone inside, started doing all these absolutely crazy and ridiculous dances-and I'm talking full throttle! I had no idea what he was up to, but I was mesmerized by it. It turned out that he was trying to get the attention of a girl working the checkout line. Making it more bizarre is that he was well dressed and very reserved looking; someone you'd never expect to behave that way. He was so over the top, it was absolutely absurd and surreal, like a scene from a movie. As I was watching it, I thought... this is my music video... and I immediately had Fred in mind to play the main character. Starting with that basic premise, I embellished on it, and developed it into what you see.

While Fred has done a lot of incredible work, and given a lot of amazing performances, it was his role in an episode of the IFC series 'Documentary Now' called the Globesman, that would impress on me that he was the perfect person to play this character.

Fred and I ran into each other when I was in the process of mixing Ear Candy. I played him a rough mix of the song and told him the concept I had in mind. At the time I was considering shooting this as a live action music video. He dug it, and immediately agreed. When I later switched gears and decided to do the video fully animated, I still wanted Fred to star in the role. I explained and asked if he remained interested. He was, and the rest is history."

Q: Are you able to tell us what Fred has said about the video after he saw it?

Cafiero: "Fred said that he loved the video and thought the song was great. I was thrilled. Fred was the first person to see it."

Q: Can you give us a few sentences about the storyline of the video?

Cafiero: "A lost and lonely soul wanders through a world of faceless people and things, but the one constant dynamic he sees everywhere he goes are the vibrant ads for his favorite red licorice. He falls for the poster girl who appears in the ad campaign, thinking she's beyond his reach, if not beyond reality... Until he wanders past the storefront window of a supermarket and spots her working the register inside. He sets out to win her over in his own, goofy, but charming way. All the while Osaka Popstar appears in animated form, popping up in the most unlikely of places, providing the soundtrack to the story-which features cameos from the Osaka Popstar Devil Dogs, the Kawaii Black Metal Trio, Sweetie Candy Vigilante and more, including homages to Saturday morning breakfast cereals, the Partridge Family, the Archies and the Monkees. The latter three bands all having a kinship with Osaka Popstar in that they reach beyond the confines of the average band, existing in a universe of their own, while simultaneously existing in ours." Watch the video below:

Osaka Popstar To Deliver Ear Candy In May