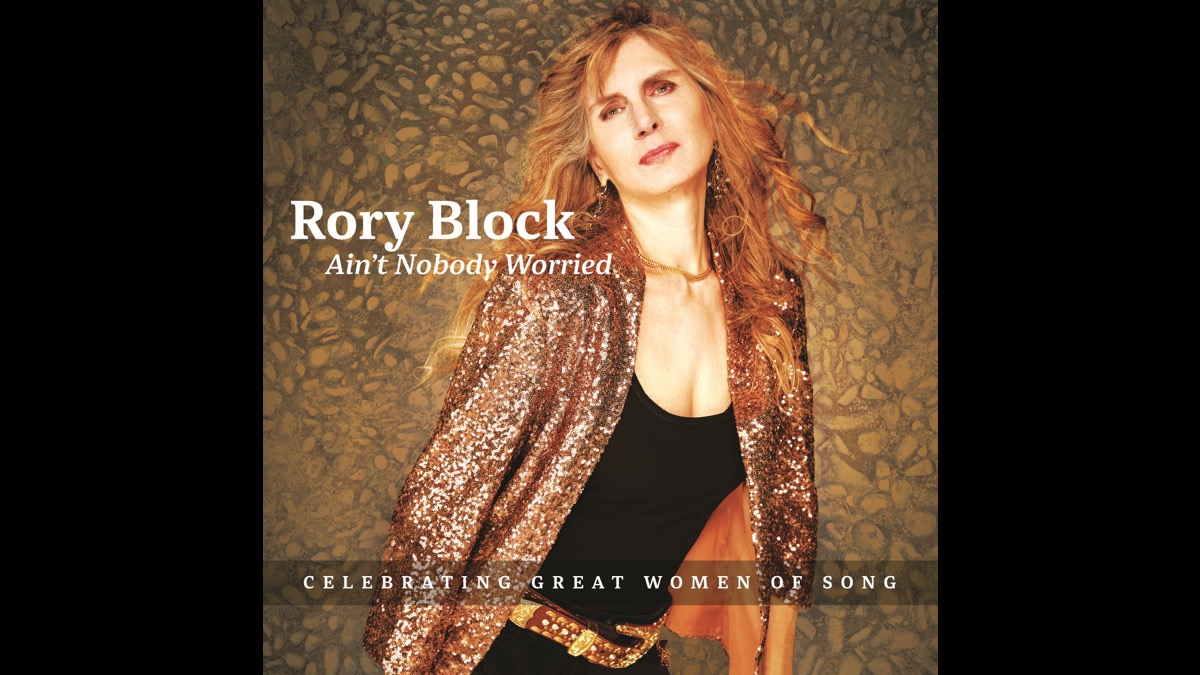 (MPM) Seven-time Blues Music Award-winner Rory Block has announced that she will be releasing new studio album, "Ain't Nobody Worried," on October 7th.

As the third volume of her "Power Women of the Blues Series," Ain't Nobody Worried follows the logical course of its predecessors. Produced by Rory Block and Rob Davis for Aurora Productions, Ain't Nobody Worried was recorded and mixed by Rob Davis at Kentucky Studios, Sandy Hook, Kentucky; and mastered by Toby Mountain of Northeastern Digital. Rory Block sang all the vocals, played all the guitar parts, slide, bass and percussion.

"The inspiration for this recording was born during the dreaded shut downs," recalls Rory Block about the album's genesis. "Being quarantined led us to the idea of Home Broadcasts, which soon blossomed into two concerts per week over two years with an incredible following of viewers from around the world. We were all hungry for togetherness and music, and found ourselves clinging to the idea that some form of normalcy still existed, somewhere, almost certainly in music. After covering just about every blues, folk and Old Timey song I ever knew, the idea popped into my head to reach into the iconic songbook of the '60s, '70s and '80s. That meant music that was on the radio over 50 years ago. In its own right it could be called historic, early American music. Viewer requests for their own favorites strengthened and expanded this idea, turning the concerts into a major potpourri of material. It was challenging, satisfying, and inspiring. The consensus was that it was time to hear these incredible songs again.

"While it was challenging, and I never had enough time to really learn the songs properly, no one minded or expected my acoustic versions to be replicas of the originals. We wanted to remember, celebrate and cling to the emotions and memories these great songs embodied. We wanted to sing along. We wanted it to be a sentimental journey with an unexpected twist. That's what this record is all about.

"In keeping with my latest ongoing project, 'Power Women of the Blues,' and inspired by the enthusiasm generated by the Home Concerts, I chose hit songs performed or written by female artists whose music changed the world. I could do multiple volumes easily as there are, as always, just too many great songs to choose from.

"There will be those who will question why I would decide to do songs by legends such as Gladys Knight, Mavis Staples, Mary Wells and others. Why attempt to resurrect such untouchable greatness? I suppose the answer is the same reason I dare to do Robert Johnson, Bessie Smith and other early blues legends. I do not do these songs to create a better version than the original. Those versions are enshrined in the halls of Musical Heaven. I do these songs because I play the music I love the most. Creating new versions honors the original artists. And, as I learned during the Home Concerts, it's time we thought about these amazing songs again."

Ain't Nobody Worried Track Listing and Comments by Rory

1. I'll Take You There
The Staple Singers (featuring Mavis Staples)
Not much explanation needed. This is one of the all-time great and powerful crossover gospel songs with an immense rhythm track, graced by the matchless voice of Mavis Staples. Mavis proved that gospel is a force in pop music. "I'll Take You There" was the first track we recorded and is the first track on this CD. It just felt right.

3. My Guy
Mary Wells
Mary Wells nailed this perfectly-crafted song by Smokey Robinson, giving it passion, charm, and a wry sense of humor. I recorded it in the same key as the original, but then was dismayed to find my natural vocal range was deeper, so I thought about slowing the track or re-recording it. In the end, I sang it in a somewhat jazzy head voice and went with it. I could have given it a bit of growl in a deeper key, but maybe it didn't need growl. After all, it is a spirited and fun song, and I had a great time singing, especially on the outro.

4. Fast Car
Tracy Chapman
Remember when this song came on the radio and blew our minds? It was a trendsetter, with a stereotype busting, cutting edge approach that was almost unheard of at the time. It was, however, (if I can pat myself on the back), an idea I had always cherished - taking an acoustic song and suddenly applying an earth shaking drum track when least expected, taking the song, with its emotionally honest and arresting story, to another level altogether. Tracy was one of the first to really turn this approach into pure gold.

5. Cried Like A Baby
Koko Taylor
I met Koko Taylor on the road in Germany. I opened for her and her tighter-than-ever band for several shows on that tour, including a TV show that ended up as a laser disk (remember those)? She dubbed me "Little Miss Dynamite," a name I deeply appreciate and cherish. No one could nail the power of a sexy full-out blues wail like Koko. On the outro, I ad lib one of my conversations with her, including her worldly wisdom and advice.

6. Love Has No Pride
Bonnie Raitt
Greenwich Village in the '60s was a hotbed of immense musical talent, with the likes of Bob Dylan living just two doors away from The Allan Block sandal shop, Joan Baez performing in local venues, Bonnie Raitt making waves with her heart wrenching blues, and the list goes on and on. My first boyfriend, Stefan Grossman, was friends with many of the pivotal players in the burgeoning scene. One of his good friends was a great songwriter and musician named Eric Kaz, who, together with Libby Titus, wrote "Love Has No Pride." We always thought it was the best song ever written, performed by Bonnie, the best singer on earth.

7. I'd Rather Go Blind
Etta James
This song led the way for the concept of this recording, establishing the theme celebrating great women of song. I just kept saying, "I can't wait to sing 'I'd Rather Go Blind.'" This song is one of the most haunting and moving portrayals of heartbreak ever written, sung by the amazingly gutsy blues voice of a woman who meant every word she sang. Etta, we got the tissues out.

8. Lovin' Whiskey
Rory Block
This is the song I thought no one would care about. This is the song that got me on an airplane. This is the song that launched my career. This is the song I didn't want to put on the record. This is the song that earned me a gold record and has remained my most popular and requested song for over 3 decades. I have heard repeatedly that it's because it's about the hidden struggles of the heart, and knowing we are not alone. More people say that it helped them through the hardest times of their lives than any other I have written. Murphy's Law, you never know. Oh yes, great guitar player Bud Rizzo played the original heart-wrenching solo. I decided to follow it note for note, for better or worse, on my acoustic version. I also stuck with the original drum pattern that I somehow constructed on one of the first drum machines ever invented. It made no sense in that it wrapped around so the "one" beat was in a different place every verse, but it somehow worked... and you know, if it ain't broke, don't fix it!

9. Dancing In The Streets
Martha and The Vandellas
Great song, great performance from Martha and her Vandellas, great groove, solid gold, what's not to love? Had to do this one for the pure joy of it.

10. You've Got A Friend
Carole King
This song came on the radio in one of the hardest periods of my life. Waking me from a deep sleep in a state of despair, hearing the vulnerable and unpretentious voice of Carole King made me sit up straight in bed and say "Maybe I can do this!" It was a life changing moment. She was the voice of every woman.

11. Freight Train
Elizabeth Cotton
This could be the most influential guitar style ever created. Libba Cotton once was Nanny to the Seeger children, until she was overheard sitting in another room singing this haunting tune. I celebrate her, not because this song became gold, but because in the most unassuming way, quietly and without a lot of fanfare, her guitar picking became one of the most influential guitar styles of all times.

"I do these songs because I play the music I love the most." -- Rory Block