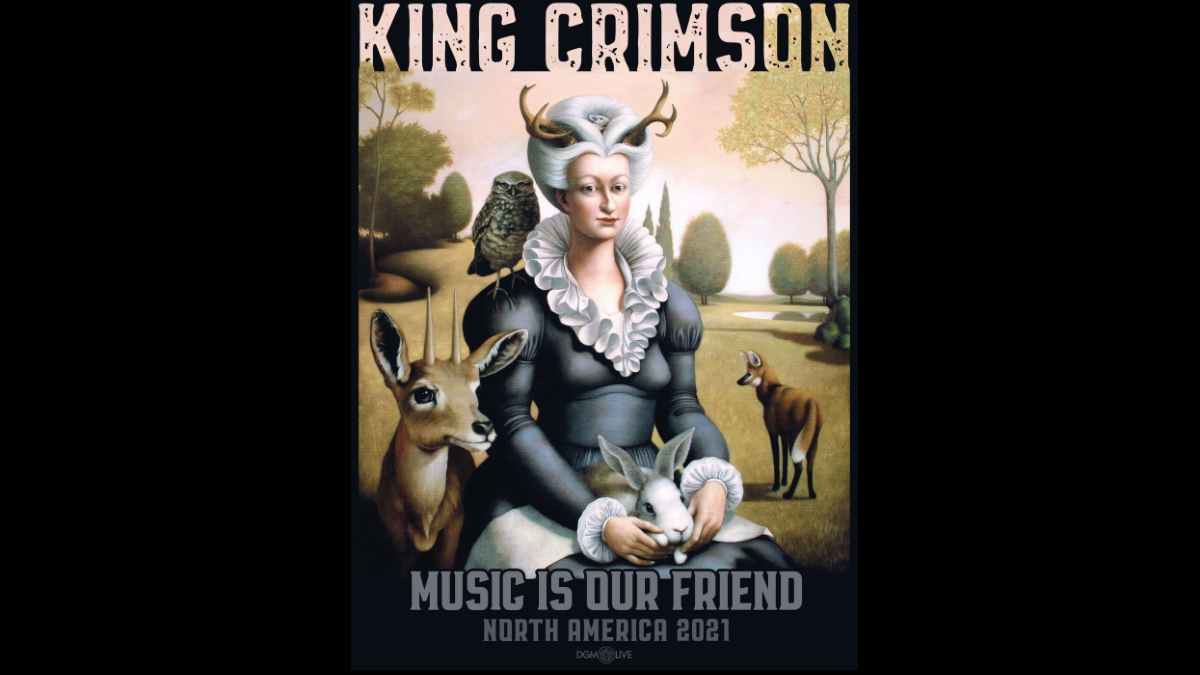 One of the most revered and influential progressive rock bands of all time, King Crimson, has announced the dates for their Music is Our Friend Tour. The jaunt begins in Clearwater, FL on July 22 and is scheduled to finish on Sept. 11 in Washington, DC. Included in the route is a stop in metro Phoenix, AZ on Aug. 7 where King Crimson will appear at the Talking Stick Resort in Scottsdale. The California Guitar Trio will open the Arizona show.

The current King Crimson lineup features founding member Robert Fripp on guitar, Tony Levin on bass, Mel Collins on sax, Jakko Jaksyzk on guitar, Gavin Harrison on drums, Pat Mastelotto on drums and Jeremy Stacey on drums. We had a chance to chat with Levin by email; his commentary below was given exclusively to antiMusic.com.

antiMusic: You must be thrilled that King Crimson will soon be back out on tour. How did you stay musically busy during the lockdown?

Tony: Luckily I have a home studio, and was able to do bass tracking on a number of projects during the lockdown. I also went into the studio last July, with considerable logistic hurdles, as you'd imagine, and recorded a double album with Liquid Tension Experiment. And I finished up a project I'd been needing time for, a large photo book of my shots from tours through the years. That's called "Images from a Life on the Road" and details on it are on my website.

antiMusic: Are rehearsals for the tour underway? With such consummate musicians in the band, does it take long to shake off the cobwebs?

Hah! Well, we'll see! Rehearsals start in a few days. The band usually rehearses a lot, and in different time segments before a tour. This time we have 'only' 8 days; that'd be more than most bands want, but this is a very conscientious band.

antiMusic: You're constantly in demand as a session player, and for example you appear on one track on the new Rymo album Kinetic. Can you tell us a bit about the making of "Spy Theme?" Were you able to go in studio with (Slightly Stoopid drummer) Ryan Moran or did you work remotely?

That was a nice track, happy to be part of it. Every project and song is different, but the usual process in recording remotely is that I'm sent the piece, as finished as it is, then record bass onto it, maybe do a few versions so there will be some choices. We miss, of course, the days of being together in a studio where the artist and producer can just comment on the part and adjust right then. But this is the way many recordings are made now, and it's not bad.

antiMusic: Are there artists you're collaborating with now where you're able to talk about the project(s)?

I've done quite a few recordings that aren't out yet, but I don't know the details of them, so nothing to report there.

antiMusic: King Crimson drummer Pat Mastelotto and his wife Deborah recently released A Romantic's Guide to King Crimson, an effort that reimagines a dozen King Crimson songs including many that you are co-writer on. Which of those cuts would you consider a favorite, and why?

It's a wonderful album and I enjoy it a lot. I don't have a favorite track but I like the way they've done the songs in a style completely different than the originals.

antiMusic: Your other band, Stick Men, has recently celebrated its 10th anniversary and released a live album called Owari that was recorded in Japan right before the lockdown. Are there plans afoot to get Stick Men back on the road after the King Crimson tour is complete?

Indeed. In September the Crimson USA tour ends, then Stick Men will tour Europe in October.

antiMusic: Guitarists may tour with a whole array of instruments. As a player of the Chapman Stick, how many instruments do you generally travel with?

For me how many instruments I have depends on the tour. In Stick Men I only play the Chapman Stick, though with pedals for its bass output and its guitar side. But in Crimson I have a trunk of instruments: the Stick, a couple of Music Man basses, and the NS Electric upright.

antiMusic: Do you have a favorite memory of a moment, either on stage or off, from a previous visit to the Phoenix area?

I have a lot of special memories from shows in Phoenix. Not just with Crimson, but also with Peter Gabriel, Seal, Richie Sambora, Levin Brothers and my own Tony Levin Band. It'll be my first time playing at the Talking Stick Resort, and I'm looking forward to it.

Tickets for the Scottsdale show are here.