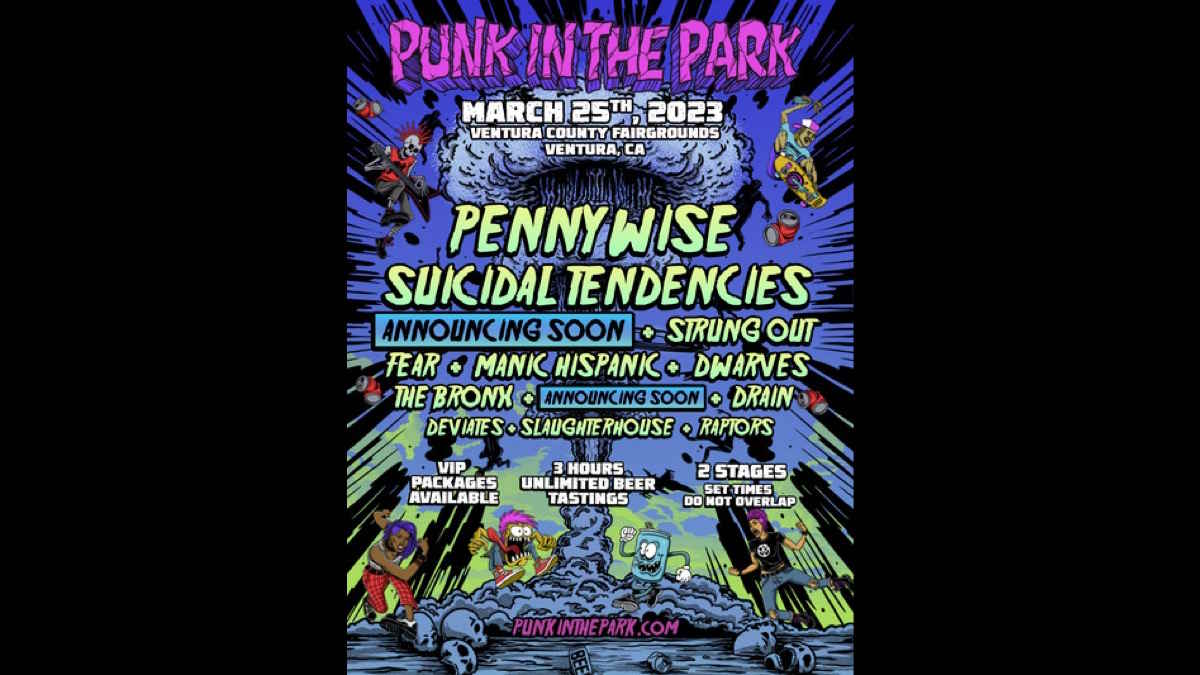 (Ashton-Magnuson Media) After hosting widely successful events in Orange County, CA, Phoenix, AZ and Denver, CO-and being listed at #6 on the Orange County Register's "20 Most Memorable Southern California Concerts Of 2022"--the Punk In The Park festival is expanding with Punk In The Park Ventura.

The debut event will feature music on two stages along with craft beer tasting on March 25 at Ventura County Fairgrounds in Southern California. In addition, Punk In The Park Orange County will return to its home at Oak Canyon Park in Silverado, CA in November 2023.

The all-star music lineup for the debut of Punk In The Park Ventura will feature headlining performances from iconic bands Pennywise and Suicidal Tendencies, along with sets from punk rock luminaries including Strung Out, Fear, Manic Hispanic, Dwarves, The Bronx, Drain, Deviates, Slaughterhouse, Raptors and more to be announce soon.

Fletcher Dragge of Pennywise exclaimed, "Looks like we all have another excuse to have a few beers with good friends and get crazy!! Pennywise, Suicidal, Fear, The Bronx, Drain...and more. WTF?!! This bill is wild! It's going to be one hell of a good day. Let's see some f*cking action people!"

Cameron Collins, producer of Punk In The Park and co-founder of Brew Ha Ha Productions said, "We've been very selective about where and when we take Punk In The Park on the road to other cities. Bringing it to Ventura, CA was a no brainer for us. We thought a lot about the band curation for this Ventura lineup and what the punk rockers in Ventura and surrounding areas want from Punk In The Park-Pennywise, Suicidal Tendencies...Dwarves, The Bronx (to name a few). I think we nailed it and I can't wait for this show!"

Brew Ha Ha Productions wrapped up 2022 with nearly 20,000 in attendance for the second annual Punk In The Park at Oak Canyon Park in Orange County, CA on November 5 & 6. The event was headlined by seminal punk bands including Bad Religion and Dropkick Murphys and also featured performances from Face To Face, The Bouncing Souls and many more. In 2023, the company will continue to diversify and expand their events across North America.

Punk In The Park Ventura will offer up to three hours of craft beer tasting (Noon - 3:00 PM) for those 21+, showcasing an impressive selection of craft beers, including some of the region's best. Attendees will also enjoy food for purchase from local food trucks and vendors, with vegan options available.

Tickets for Punk In The Park Ventura are on sale now at here.

News > Punk In The Park