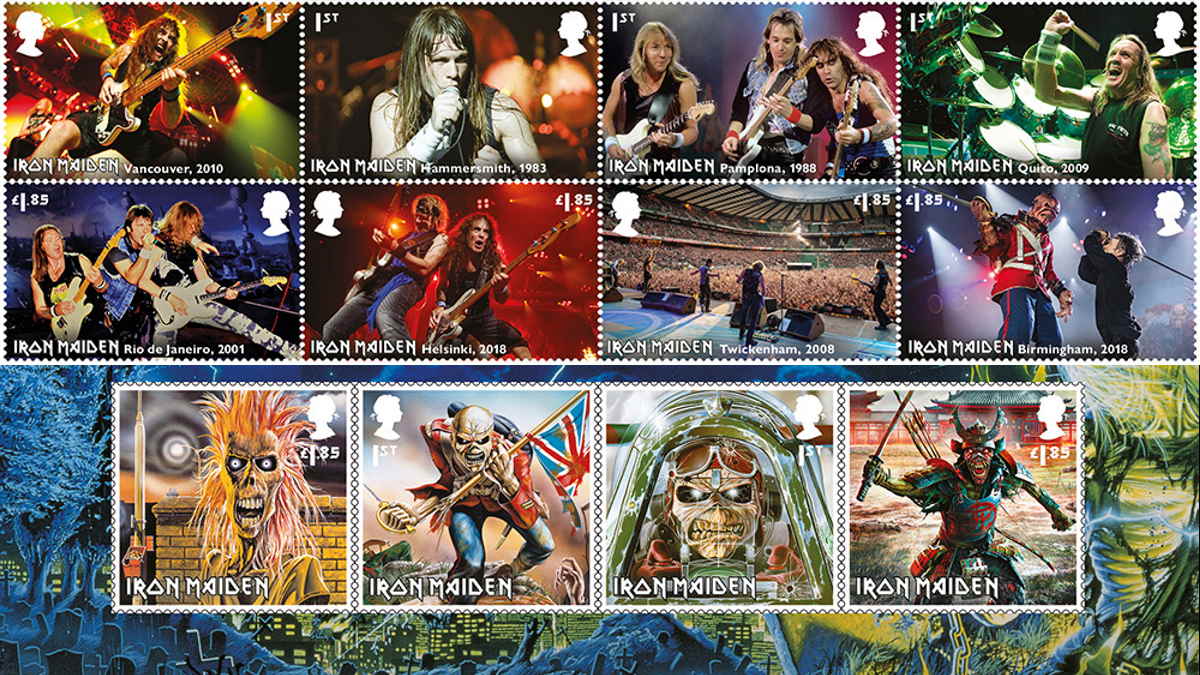 Britain's Royal Mail have announced that they will be honoring heavy metal legends Iron Maiden with a special set of postage stamps that will be going on sale January 12th.

The Eddie stamps will feature artwork from the band's 1980 debut album, "The Trooper": The unforgettable artwork for one of Iron Maiden's greatest hit singles and, more recently, the logo for their award-winning beer, "Aces High": Reimagined as a fighter pilot for a song honouring the RAF servicemen who defended Britain during the Second World War, and "Senjutsu" Eddie: Samurais, feudal Japan and flashing blades inspired this katana-wielding warrior, from the band's most recent album.

Band founder Steve Harris shared, "We were all absolutely astounded - in a good way! - when we heard first about the commemorative project, and equally pretty much speechless when we saw the stamps for the very first time. They look superb and I think they really capture the essence and energy of Maiden. We're all very proud that Royal Mail has chosen to honour the band's legacy like this and we know our fans will feel the same way,"

Iron Maiden manager, Rod Smallwood added, "As a band who have never played by anyone else's rules for over 40 years, it's very gratifying to see them honoured in their home country in this way. We're proud to show how these six band members are still appealing to more and more fans every year with their music and their legendary shows - which I think these stamps really capture well. It's also fantastic that Eddie has been honoured too - it's incredible to think that Her Majesty, may she rest in peace, saw these and lent her iconic silhouette to them too."

David Gold, Director of External Public Affairs & Policy, Royal Mail, also said, "Few bands in the history of rock music can be called bona fide rock legends - but Iron Maiden are just that - and more. With legions of devoted fans of all ages and from every corner of the globe, not only have they changed the way rock music sounds, but they have also changed the way it looks. We fully expect their fans will love these stamps as much as we do."