Metallica Revisit Black Album Era With Wherever We May Roam Series 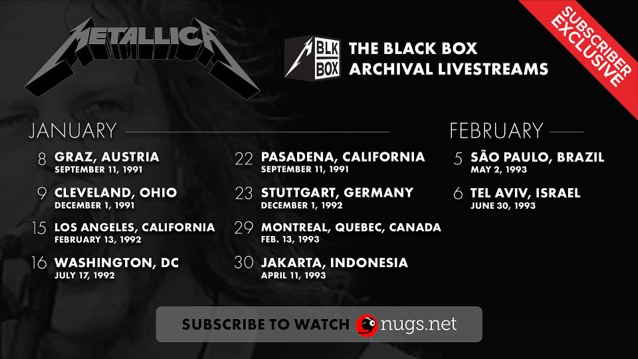 Promo for the series

Metallica have resurrected their "Wherever We May Roam" streaming series with ten "Black Album" era performances being shared via nugs.net.

"From 1991 through 1993, Metallica toured the world in support of The Black Album. The Black Box, in partnership with nugs.net, is proud to present the rebroadcast of these 10 iconic concerts, streaming for free and exclusively for nugs.net subscribers. The series launches this Sunday January 8th and will air every Sunday and Monday for the next five weeks," reads the announcement that was also emailed to fans.

The band said of these streams, ""If you remember these shows, you know they aren't the polished productions you'll find today. This standard definition footage comes from Betacam tapes with the occasional camera dropout, and the audio is straight from the soundboard. But these shows aren't just a time capsule from the '90s anymore; they've gotten some modern upgrades, including a new, extended edit and mastered audio by Reuben Cohen at Lurssen Mastering."

They are also offering "nugs.net subscribers can enter to win a limited-edition, AUTOGRAPHED and custom framed photo, signed by James Hetfield, Lars Ulrich, Kirk Hammett, and Jason Newsted! An additional winner will receive a 'Metallica (The Black Album) Remastered, Deluxe Box Set'." Check it out here.