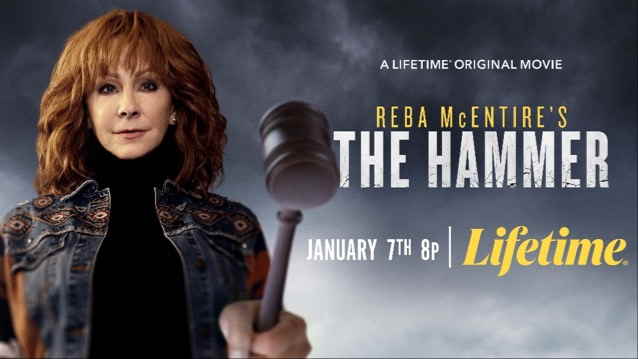 (The GreenRoom) The new movie, Reba McEntire's The Hammer, starring and executive produced by Reba, will premiere tomorrow, January 7th at 8/7c on Lifetime and will be available to stream the following day.

In The Hammer, Reba plays Kim Wheeler, an outspoken, firecracker lawyer who is appointed Judge of the 5th District of Nevada and is one of the few traveling judges left in America.

This is Lifetime's second collaboration with Reba, who also starred in and executive produced her 2021 holiday film, Reba McEntire's Christmas in Tune. The Hammer also reunites McEntire with her Reba co-star Melissa Peterman and stars Kay Shioma Metchie and Rex Linn.

"I loved the script for The Hammer and could definitely identify with the tough, no-nonsense spirit of the real life person it was based on," Reba said. "Also, how could I say no to getting to work with my boyfriend, Rex Linn, and my Reba tv show co-star Melissa Peterman again? We had the best time!"

Leading up to the premiere, Reba will appear on The Talk today at 2/1c. Tomorrow, Jan. 7, Reba and her co-stars will be discussing the movie via Facebook Live at 6/5c. Reba will be also be live tweeting throughout The Hammer's debut. Fans can join in with Reba by using #TheHammer.