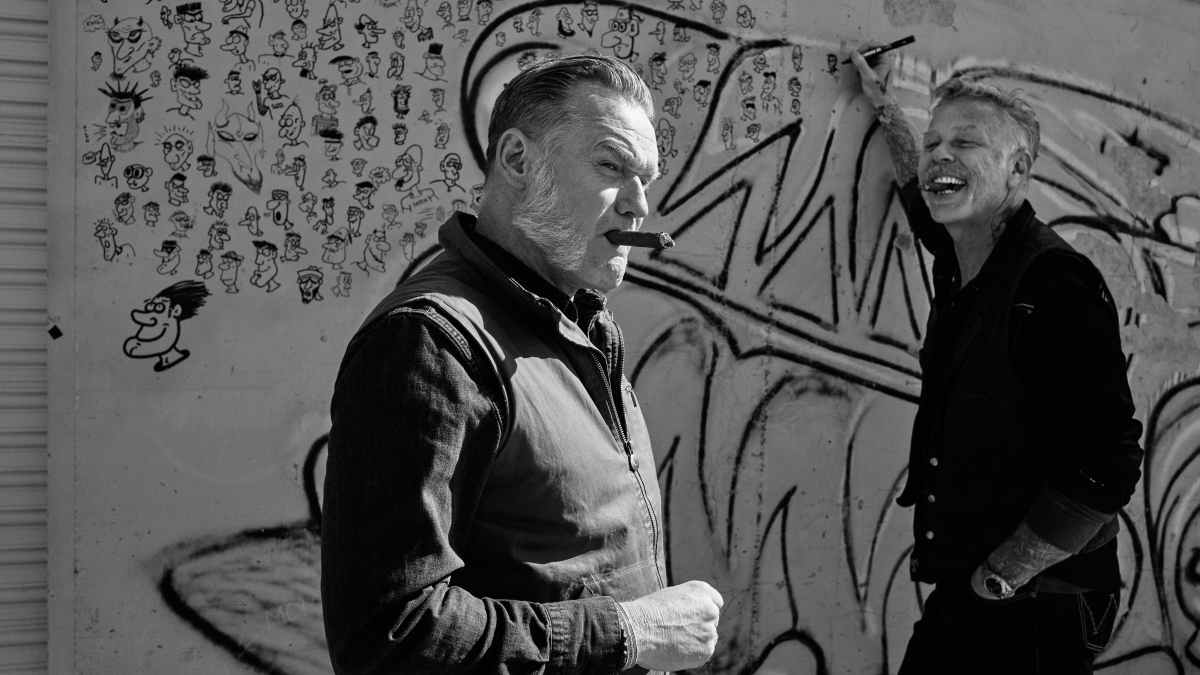 Promo photo courtesy We Are RHC

Here is the official announcement: BLACKENED American Whiskey announces the release of BLACKENED Cigars "M81" by Drew Estate, a passion project that brings together three immensely talented and vastly experienced cigar enthusiasts-Rob Dietrich, the Master Distiller & Blender of BLACKENED American Whiskey; James Hetfield, Metallica co-founder, singer and guitarist; and Jonathan Drew, Founder and President of Drew Estate. The collaboration began with Hetfield and Dietrich, who frequently enjoy cigars together after forming a close friendship through their work together on BLACKENED. The BLACKENED Cigars "M81" by Drew Estate is an exploration into the deepest, darkest, and heaviest depths of the mystical Maduro leaf and is available to enjoy in four sizes.

"It is really a fun social thing for me, a fellowship, to have a few buddies sit around with a few sticks," Hetfield says. "My buddy, Rob Dietrich, and I frequently enjoy cigars together, and he introduced me to Jonathan from Drew Estate. The three of us connected and shared each other's vision and story about where we've been, what we like to see, what is important to us now, and we all came up with what a BLACKENED 'M81' Cigar would look and taste like. I love the Maduro leaf, and I'm super excited for everyone to try this."

Having been friends for well over a decade, Dietrich and Drew always wanted to combine their talents to collaborate on something special, and this seemed to be the perfect opportunity. Samples from the Drew Estate portfolio were sent to Hetfield and Dietrich, who kept cigar journals to critique the cigars and identify what they liked and disliked about each one. After two years of enjoying and sampling cigars together, the group decided on the exact flavor profile that would become BLACKENED Cigars "M81" by Drew Estate.

"This was a project that was purely born from passion...for music, for fellowship, for life, and all the in-between moments within," says Dietrich. "James, Jonathan, and I worked together to create what we feel like is the perfect cigar. The result is truly a monster of flavor-a triple Maduro, designed with definitive depth for darker and bolder palates."

"Hetfield, Dietrich, and the Drew Estate team have dedicated an immense amount of time into this historic brand," adds Drew. "BLACKENED Cigars 'M81' Cigars by Drew Estate reveals layer-after-layer of Maduro's deepest, darkest, most magical, and mysterious character that narrates a defining story of just one thing ... passion!!!"

Cigars and whiskey have always existed in perfect harmony, and BLACKENED Cigars "M81" and BLACKENED American Whiskey are no exception. Dietrich's take on how these two worlds come together is, "The bold, ultra-dark tobacco of the triple Maduro embodied in the BLACKENED Cigars "M81" pairs perfectly with the quality and depth of BLACKENED American Whiskey's sweet bourbon and earthy rye blend, with the brandy cask finish tying both the tobacco and whiskey together in an unrivaled experience of flavor."