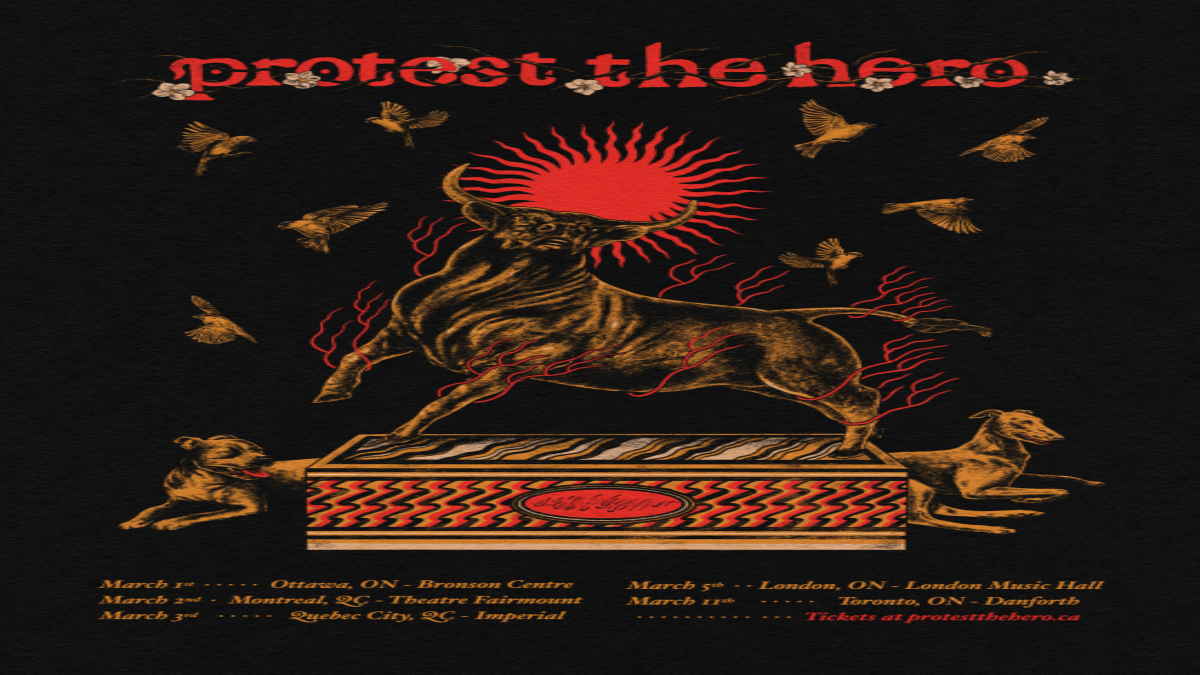 Protest The Hero have announced that guitarist Luke Hoskin has decided to retire from touring, but he will still remain involved with the band.

"It has been over 3 years since we played our last show. Hard to believe we were in the midst of putting the final touches on Palimpsest when the world shut down. So we're happy to announce it's finally time for us to get back out there with some Ontario/Quebec dates in March.

"In the initial planning stages for the Palimpsest record cycle, we had some dates booked in 2020 that never got announced. To be frank, it was a tour to see if we wanted to continue touring-a way to dip a toe back in to see if that lifestyle still worked with our middle-aged, adulting lives. When we didn't get that chance to hit the road during the pandemic lockdowns, some of us were relieved and others were disappointed. When the conversation came up again, Luke expressed that he was relieved when we had to cancel the shows in 2020, while the remaining 3 of us were still keen to play shows if it could work. We came to the difficult decision that we'd continue performing and look for a suitable live guitarist for the touring band. However, never fear. Dear Truke will continue to be involved in many other areas like writing, recording, and editing pupdates."

Luke had this to say, "First, I want to say that I have tossed and turned many nights debating this decision. Myself and the rest of PTH have been playing live for more than half of our lives at this point, so walking away from one of the things I know best was not an easy decision.

"As the band took a pause from live music (as we all did when the pandemic hit), it gave me some time to gain clarity. Though my heart went out to other artists who felt the detrimental effects of not being able to tour, I found myself feeling the opposite: somewhat relieved that touring was off the table.

"I have always believed that the stress associated with touring was worth it in the end. A day filled with challenges and tension was always relieved by the hour (or so) we got to play at night.

"And while that rings true for most of my touring career, at some point, my love of playing live started to wane making it tougher for me to justify all the other challenges that came with it. I found myself just trying to "get through it" rather than soak it up and enjoy the process. Knowing that, I am certain it's time for me to step back from the live side of things.

"I can say without any hesitation that the fellas in the band who are continuing on with the show still truly love it. Night after night, I've watched them relish the moments they got to spend on stage, each one of them glowing after the set. Showgoers, you'll be in the best of hands moving forward.

"This isn't to say that I am not still a part of the band. The guys are letting me stick around to write, record, and laugh at jokes on our Discord. Writing, arranging, and recording have always been my favourite parts of being in a band, and I consider it a privilege to keep writing riffs for PTH. It's really all I know how to do on a guitar..."

The band continues, "When we were racking our brains for who could fill Truke's big sneakers, Michael suggested Ben Davis. Ben is an amazing guitarist who played with Michael for many years in his previous band. So we are thrilled to announce that Ben will be ripping it up stage right for these upcoming shows.

"In addition to having Ben wielding a six string, we have the pleasure of announcing that Henry 'Hankzercules' Selva from The Human Abstract will be playing bass and bringing his best Soulfly stomp to the stage for PTH. Hank has been someone we've known for years, and spent many days on tour with. So we are happy to have him now sharing the stage.

"Our band is a community that is far larger than the 'members' you see on stage. Over the years, there have been many people involved in making Protest The Hero what it is today. There are many roles that need to be filled to make this all work, and in the past, it may have been a more rigid 'are you in or are you out?' These days, it definitely takes a village, and we are happy to welcome our two newest idiots."