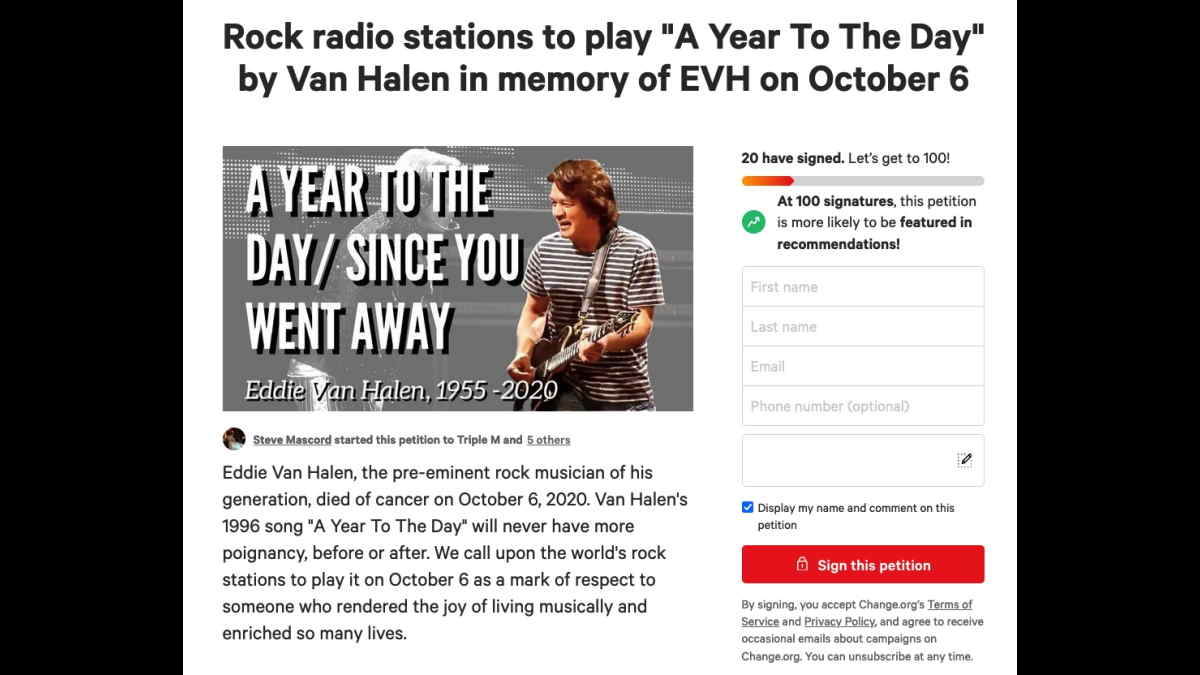 The White Line Fever sent over word that an online petition has been launched calling on rock stations worldwide to play 1998 deep cut "Year To The Day" on Wednesday in honor of the late guitarist Eddie Van Halen.

"Van Halen's 1996 song 'Year To The Day' will never have more poignancy, before or after. We call upon the world's rock stations to play it on October 6 as a mark of respect to someone who musically rendered the joy of living and enriched so many lives."

"Year To The Day" was never released as a single and Van Halen III is generally regarded as the band's least successful album. But petitioner, Australian journalist Steve Mascord, commented: "It is true that the Van Halens were populists in most ways, eschewing their early music teachers' snobbery towards rock music and always seeking to reach the widest possible audience.

"But there are three main reasons why I think this plea to radio programmers is appropriate.

"One, the playing of a song that would otherwise go nowhere near a commercial radio playlist cannot be mistaken for anything else but a tribute to Eddie. It's an 8:34 epic with strong prog rock leanings. This isn't just another spin of 'Panama' or 'Dreams". The listener will be left in no doubt why he or she is hearing the song.

"Two, Van Halen III was the last album of completely new Van Halen material, with Edward even singing on one song. I believe it deserves to be re-examined and reappraised in an era where the various camps into which rock was divided in the nineties mean nothing.

"And three, I find the song particularly touching and brilliantly performed. I hear it and there is someone trying to say somethig to an audience that, perhaps. is not listening so closely. I see no reason for it not to be be played on the first anniversary of Ed's death.

"'A year to the day/since you went away' - what other song could possibly be more fitting?'

"I woke up to yet another day
Grown to expect, expect more of the same
Except for, for a subtle change
And that is, I'm slowly fading away
Harvest moon, soon will pass
Crop is gone, left only chaff
A bitter pill, and an overcast
A flag unfurled, at half mast"