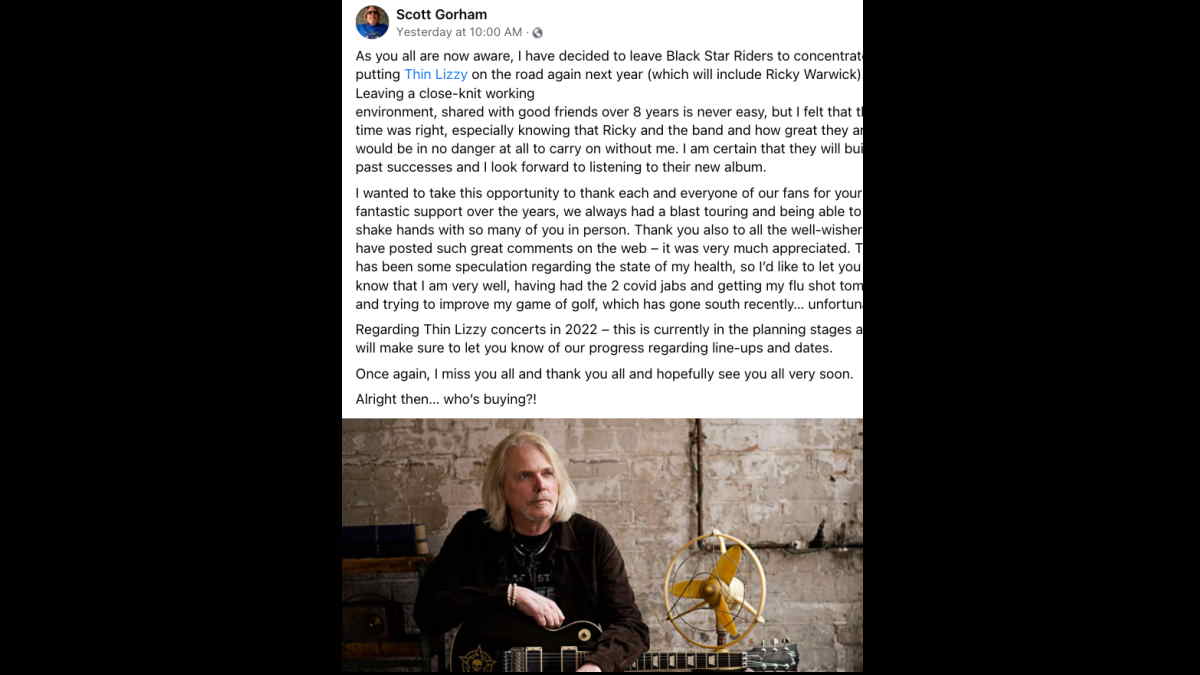 (hennemusic) Scott Gorham has revealed plans to relaunch Thin Lizzy in sync with news that he has exited the lineup of Black Star Riders. Gorham was part of the lineup that transitioned from Thin Lizzy to Black Star Riders in 2012, and appeared on the group's four studio albums while occasionally performing under both brands over past decade.

Black Star Riders vocalist Ricky Warwick (also a touring member of Thin Lizzy), broke the news this week of Gorham's departure alongside details of a new record deal for the group, saying, "We are very sorry to see Scott go but we discussed a very heavy World touring commitment on the new record and Scott decided he wanted to concentrate just on Thin Lizzy - and being the legend he is none of us can blame him. We all wish him the best and he will be looking to put Thin Lizzy back out on the road from 2022 onwards with a busy schedule, so he won't be missing me too much!"

Now, Gorham is sharing his own thoughts on the lineup change and his plans moving forward. "As you all are now aware, I have decided to leave Black Star Riders to concentrate on putting Thin Lizzy on the road again next year (which will include Ricky Warwick)," explains Gorham on social media. "Leaving a close-knit working environment, shared with good friends over 8 years is never easy, but I felt that the time was right, especially knowing that Ricky and the band and how great they are, would be in no danger at all to carry on without me. I am certain that they will build on past successes and I look forward to listening to their new album.

"I wanted to take this opportunity to thank each and every one of our fans for your fantastic support over the years, we always had a blast touring and being able to shake hands with so many of you in person. Thank you also to all the well-wishers who have posted such great comments on the web - it was very much appreciated.

"There has been some speculation regarding the state of my health," he continued, "so I'd like to let you all know that I am very well, having had the 2 Covid jabs and getting my flu shot tomorrow and trying to improve my game of golf, which has gone south recently... unfortunately.

"Regarding Thin Lizzy concerts in 2022 - this is currently in the planning stages and I will make sure to let you know of our progress regarding line-ups and dates. Once again, I miss you all and thank you all and hopefully see you all very soon. Alright then... who's buying?!" Read more here.