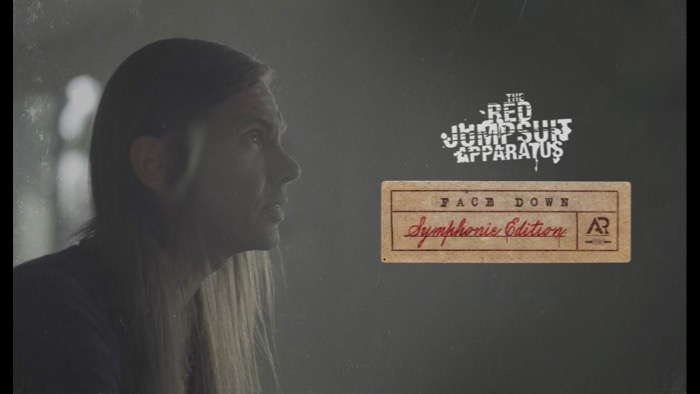 The Red Jumpsuit Apparatus have premiered a music video for the
new symphonic version of their 2006 hit "Face Down", which features Kendra Cover, who starred in the original video.

Ronnie Winter (Lead Singer, Songwriter, Guitarist, Producer) explains "Over the years we've gotten a lot of requests for this song, not just to play it, but to re-record it. So we finally recorded not only a new symphonic edition of 'Face Down', but the whole album. With this video we specifically chose to focus on the line "a new life she has found," which is also my family's experience. We definitely did not get to show that in the first video. Everything has been about that. From the casting, to the crew, to the locations, to the treatment, to the story. From the beginning we really just wanted to show how awesome things can get if you have the courage to make decisions that can be extremely painful and tough. That's what this has been about since the beginning. Not only have things worked out for the character in the video, but now she's actually learned how to help other people get through the same situation that she has, which is very important to someone like me who's in recovery because that's what we do. So, it's about healing and how it's hard and messy, but it happens and it's worth working towards.

"I am a child of a domestic violence household, so is my brother Randy, who plays guitar. It's something that's been tough, our whole lives. I don't talk about it a lot, there are probably less than 10 really deep interviews about it, that's a really low number for being a band for 20 years. The more I think about it, I get a little sad. There were definitely some times during the new video shoot that I got a little emotional. I'm trying to balance those memories, because I thought that was all behind me. I remember showing our director Angela a picture of me on set from 17 years ago, and if you could see the photo you'd see what I'm talking about. I was literally completely full of anxiety, and also bad memories. I hadn't had any therapy, I was just out there, just a 22 year old with no tools, trying to deal with all this stuff that happened, while people are filming me, while I'm singing a song about it, and I never really even dealt with it myself. But because of the success of this song I did eventually have to get straight with myself on what did happen. My whole family, we worked it out, there's the good story. My mom, she's doing really well. And with the new video what I wanted to show is that our character, she later had this great life that she achieved.

"The song is an anti-domestic violence song, it has always been. So we did exactly what we did the first time, and we paired with an awesome charity called domesticshelters.org, you need to check them out, they're great. Even if you don't have anything like that going on in your life right now, you might get that phone call, from a cousin, or a sister, or a brother, or whoever is going through it, and you would have the resources now."

Joey Westwood (Bassist) says "It feels very cool doing 'Face Down' again. Obviously the song's awesome for us, and has a good message, but doing that first video was the first time I ever really did a video, and it was super memorable. And to have Kendra back is awesome."

Josh Burke (Guitarist) shares "I'm in this band for sure because of the 'Face Down' music video. My friend Matt showed it to me when I was 12 years old, and it's a core childhood memory. If it wasn't for the video, who knows what might have happened. To be there with everybody again was a trip."

Angela Winter-Defoe (Director and wife of Ronnie Winter) adds "As someone who has been through domestic violence myself, it was important for me to honor and show it justice to the people who have tied their experiences with the first video. I also wanted to show how much life could change for the good when you leave abuse. Even though years have passed, we still can be triggered, we show the character use her tools to self regulate and be able to continue on. That's the hope and healing I wanted to spread with this video."

Angela Winter-Defoe is RJA's first female director. The child in the video is played by Ronnie and Angela's son, Wolfgang.

Kendra Cover (returning actress) says "Working on this video with the band and creative team was such a pleasure. It was an incredible measure of the time that has passed and the lives that have been lived since the original song and video release. But even more so, the gorgeous symphonic return to this song and subject matter is dear to my heart. We see all too often in the media sensational stories of abuse, but not nearly enough do we see the healing that is available and fully possible -- just how full and good life can be after trauma. I am honored to be a part of this message out into the world and the creative passion behind it."