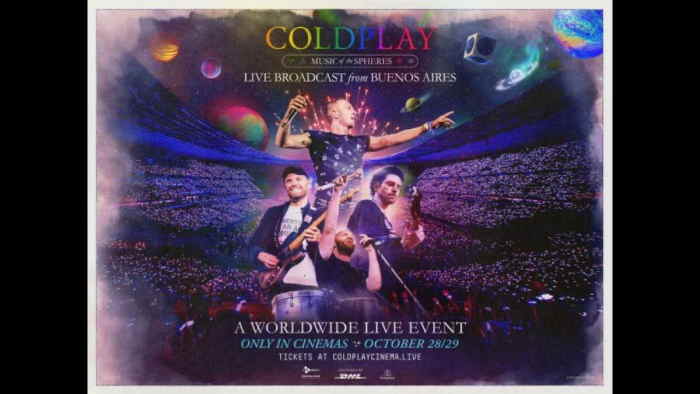 (Atlantic Records) On Saturday night (October 29th), Coldplay's triumphant show at Buenos Aires' River Plate stadium - one of ten sold out nights at the venue - was broadcast live to cinema audiences in 81 countries around the world - a record-breaking number of countries for a live cinema event.

Marc Allenby, CEO, Trafalgar Releasing who broadcast the shows, said in the announcement, "We are delighted to be partnering again with the Coldplay team on this major live broadcast, having established a successful partnership with the 2018 documentary release A Head Full Of Dreams.

"We are also extending our partnership with CJ 4DPlex on this live event featuring one of the world's biggest artists, giving fans the opportunity to experience the phenomenal Music Of The Spheres tour on the big screen across the globe in unison."

As well performing classic hits from across their career in a stadium bursting with lights, lasers, fireworks and LED wristbands, Coldplay were joined on stage by Jin of BTS for the debut live performance of The Astronaut - Jin's new solo single, co-written by Coldplay. The full video of the performance (taken from the cinema presentation) can be seen below: