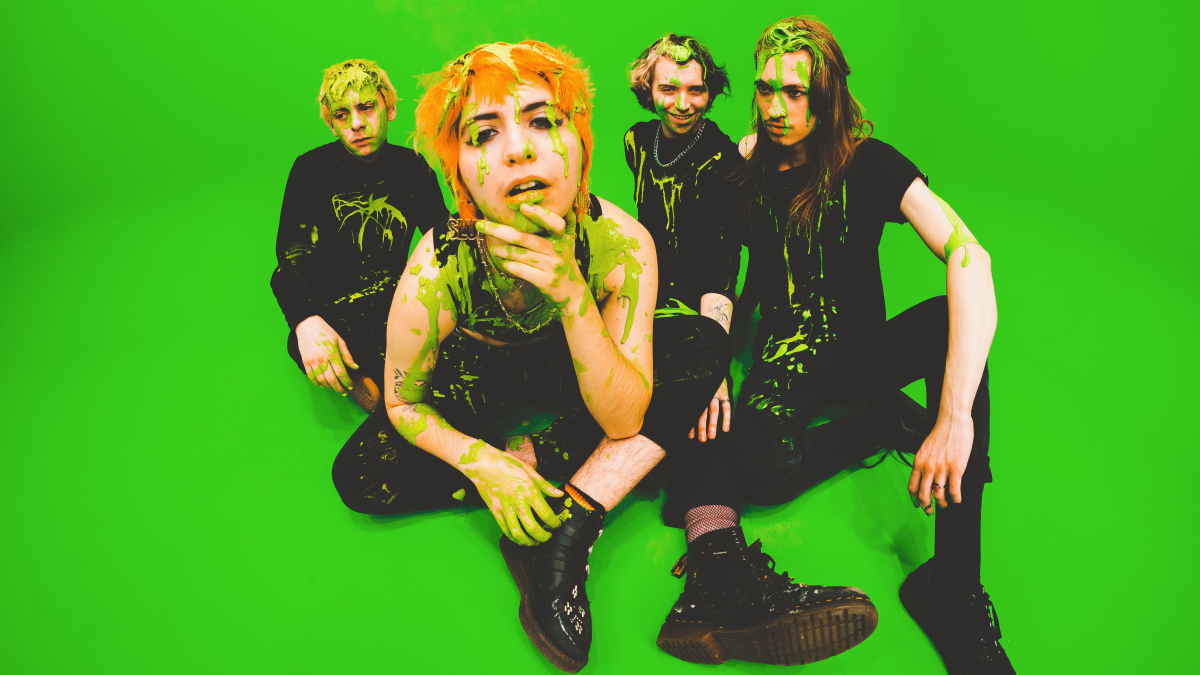 New Jersey rockers Pollyanna just released their brand new album, "Slime", and to celebrate we asked lead vocalist and guitarist Jill Beckett to tell us about the effort:

This album truly means the world to all four of us as a band and not only that, it's our first experience as a band writing a full length album all together, taking the time to record for three weeks at a studio and all share that experience, and being so incredibly proud of these 40 minutes of music we shared with the world. "Slime" focuses on a lot of things but I think the main idea I want people to get from listening to the album in full, is that the world f***ing sucks and is full of so much hate and disappointment and loss and letdowns, especially the older we get. But there's something peaceful about accepting it, finding peace in how sh*tty the world is and if you don't set any expectations, you won't be as let down. The album talks about accepting how selfish humanity can be and all that comes with society and lying to ourselves about our flaws and all the ugly parts about ourselves just makes us blissfully living in delusion. The song that really sums this up on the record in my opinion is Acid Song. The chorus itself "So leave me nothing, because you'll just take anyway. I know you don't care, we're all alone" really emphasizes that the world will just take from you and in the long run, we are constantly alone just trying to find a way in the world to feel as if we aren't.

In the beginning of 2020, I started writing a few lines of SLUT, wrote Pathetic during quarantine, and some of Pasadena during then too but it wasn't until August of 2020 when Slime was born. We decided to take a band trip to Maine and stay in a cabin and set up our equipment to have some fun. We took some psychedelics and wrote Acid Song, and after that we knew the direction we wanted to go in for the record, or at least the general idea. We knew we wanted Slime to be raw, heavy, gritty, and honest. In February of 2021 we took another trip in the winter to finish writing the record in this cabin in the woods which was truly such a beautiful experience and most of the songs on the record were truly formed in that cabin. It was really cool because in the demos we made, a lot of it was written completely on the spot and we just went with it.

Recording this album at Barbershop Studios with Brett Romnes was genuinely a life changing experience to us and the time that we spent there was some of our favorite memories we ever had together. Going in with 21 days to record a 12 song record gave us time to really dive into each song completely and let go of all the parts we drilled down with an open mind to changing things. There's so many parts in the record where we had almost COMPLETELY changed it in studio after live tracking through the console and hearing each song back. A lot of "Relationship Anxiety" was written in the studio since that was the newest song we wrote. There's also some hidden tracks and samples we used throughout the record that were just inside jokes of the day while in the studio, which makes the whole album really personal to us.

Listen to Slime with open interpretation. You may get angry, sad, happy, more angry, and feel empowered. We hope you relate to it in some way.

Hearing is believing. Now that you know the story behind the album, listen to the song "Relationship Anxiety" for yourself below and stream the full album here