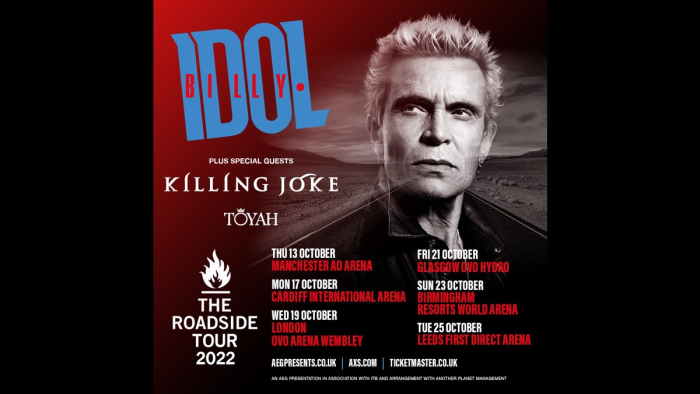 Billy Idol just shared the sad news that Television have been forced to drop off the forthcoming UK leg of his Roadside Tour, but the good news for fans is that he recruited Killing Joke to join him on the trek.

Television had this to say, "Unfortunately due to illness, we have to cancel the forthcoming UK tour with Billy Idol. We send our deepest apologies to any fans who have bought tickets."

Killing Joke mastermind Jaz Coleman shared, "Just when you think it's all over, I'd been missing my brothers in Killing Joke and then this opportunity came up. Looking forward to seeing everyone next week, 1 days rehearsal and a secret gig somewhere in the U.K. Lets get stuck in"

Toyah are still all set to take part in the trek. Billy Idol had this to say, "We're looking forward to having Killing Joke and Toyah join us in the UK. This is going to be an epic show!"

"I am thrilled to be opening for Billy Idol on The Roadside Tour," an excited Toyah commented. "Billy is an icon whose music has thrilled millions worldwide and continues to do so. Billy has created a style of rock that has gone on to inspire generation after generation. 'Rebel Yell, 'White Wedding' and 'Mony Mony' are up there with the all-time greats."

The tour is set to kick off on October 13th in Manchester and will wrap up on October 25th in Leeds. See the dates below: