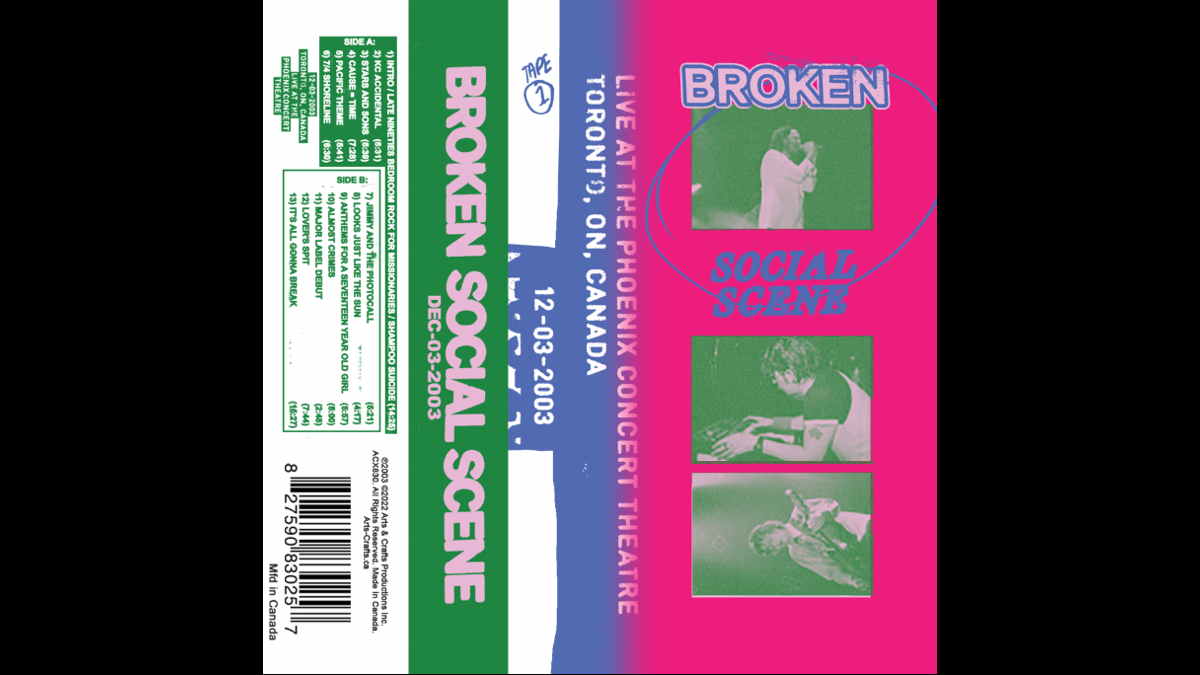 (The Oriel Company) Toronto indie rock collective Broken Social Scene have released a surprise bootleg of a 2003 concert. "Live At the Phoenix Concert Theatre, 2003," is now available digitally or via limited edition cassette, which was directed by Stephen Chung.

"To commemorate the 20th Anniversary of You Forgot It In People I dug into my archives and put together this live version of "Jimmy and the Photocall," one of my favorite Broken Social Scene songs that has never been released," says Chung. "We captured the entire show in standard definition on glorious Mini DV with whatever cameras and recording equipment we could beg or borrow. We are happy to share this with you 20 years later."

From December 3rd to 5th in 2003, indie rock collective Broken Social Scene performed the three sold out hometown shows at the Phoenix Concert Theatre in Toronto. The band had just returned from a tour that took them across the US, UK, and Europe in support of their sophomore album, You Forgot It In People.

The record had been released the previous year and was already on its journey to becoming one of the most celebrated indie albums of the decade. Pitchfork had called the album "endlessly replayable, perfect pop" giving it a Best New Music designation and the BBC called it "absolutely, utterly essential," setting into motion the band's swift ascent to global recognition.

On this live bootleg, you'll hear a group of friends joyously performing for their community, the people of Toronto who supported them when Broken Social Scene was just a two-person instrumental curiosity, before all the awards, the late night television performances, and invites to Glastonbury and Lollapalooza.

This collection features songs from You Forgot It In People, select tracks from their follow up self-titled record (including a 15 minute rendition of "It's All Gonna Break"), and the rarity "Jimmy and the Photocall," a long-time fan favorite that never made it on to an album! It is available here.