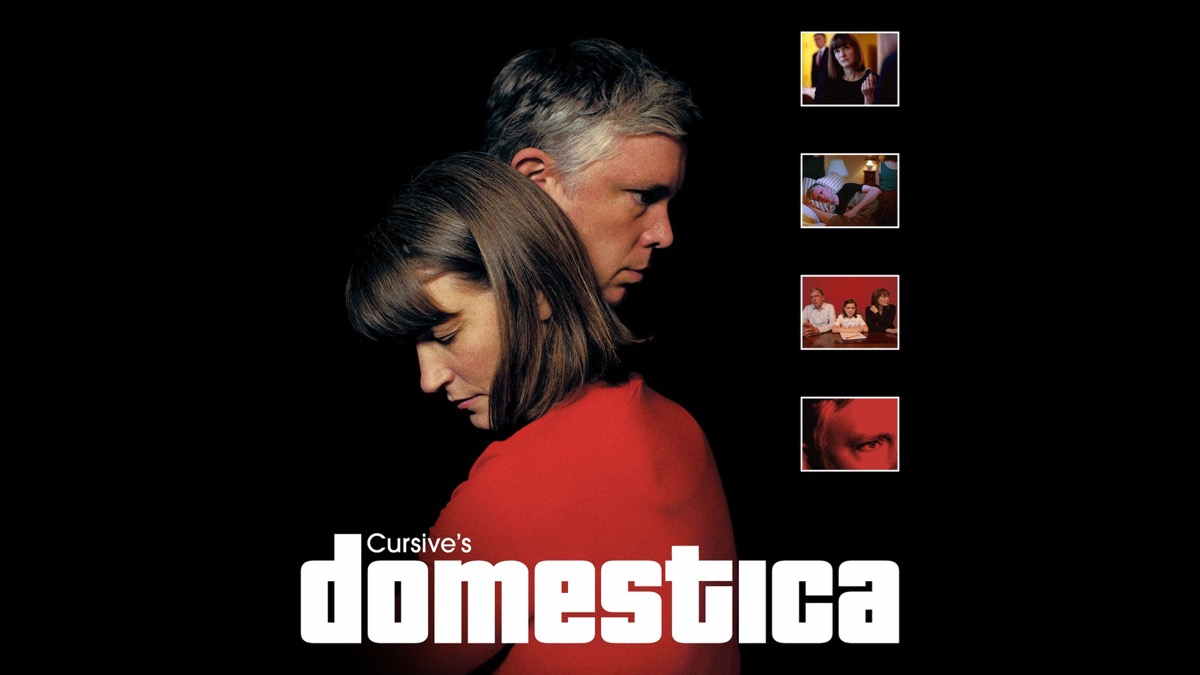 (Chromatic) Cursive have announced a remastered reissue of their third album, Domestica, will be released on September 9th, 2022, via the band's own 15 Passenger Records.

A pivotal record for the band, it was the first with guitarist/backing vocalist Ted Stevens and first in a now-long line of concept albums. The reissue will mark Domestica's first vinyl pressing in years, and will be available in multiple variants, including: red and black swirl vinyl (exclusive to indie retailers); gold vinyl; and standard black vinyl.

The vinyl reissue will also come with a companion 7-inch (or disc, in the CD format) of four songs by Braces, singer/guitarist Tim Kasher and drummer Clint Schnase's short-lived, pre-Cursive band alongside Kasher's ex-wife, bassist Kim Heiman. All written around the same time as those on Domestica, the band only ever recorded five songs; the fifth was an early version of what would become album track "Making Friends and Acquaintances." Pre-order the Domestica reissue now HERE.

The reissue's unique packaging includes updated, painstakingly rephotographed artwork featuring the same couple, "Sweetie" and "Pretty Baby," as on the original 2000 art. Again portrayed by Zack Nipper and Jenn Bernard Walker-now with Nipper's own daughter depicting their child-it picks up the visual representation of the album's conceptual arc, and imagines what this now-family's life would look like, 20 years later.

The packaging also contains a retrospective essay by Kasher that revisits the time, place, and mindframe of the band around Domestica's recording in the winter of 1999/2000-and also explains how it became known as a "divorce record" despite not being one (nor specific to his own divorce). An excerpt of his essay, which is exclusive to the artwork, reads: "The thing of it is - and I've been repeating this for twenty years now - Domestica IS NOT a divorce record. The relationship survives. It's more of a story about couple(s), the minutia of their daily squabbles and how difficult it can be to maintain such an intimate bond with another person. The couple in the album never split up in my storyline; I found it more depressing and perhaps more realistic that they'd stay together, despite the glaring issues..."

A critical darling and beloved by fans, the success and recognition of Domestica changed the trajectory of Cursive's career. It was recorded over nine days at Lincoln, NE's Whoop-Ass studios (the original studio of Mike and AJ Mogis), and the album's bracing, jagged, cathartic, and visceral songs capture the urgency of the reunited young band-and continue to resonate with fans more than 20 years later.

Domestica reissue track listing:
1. The Casualty
2. The Martyr
3. Shallow Means, Deep Ends
4. Making Friends and Acquaintances
5. A Red So Deep
6. The Lament of Pretty Baby
7. The Game of Who Needs Who the Worst
8. The Radiator Hums
9. The Night I Lost the Will to Fight

Cursive's Tim Kasher Premieres 'I Don't Think About You' Video