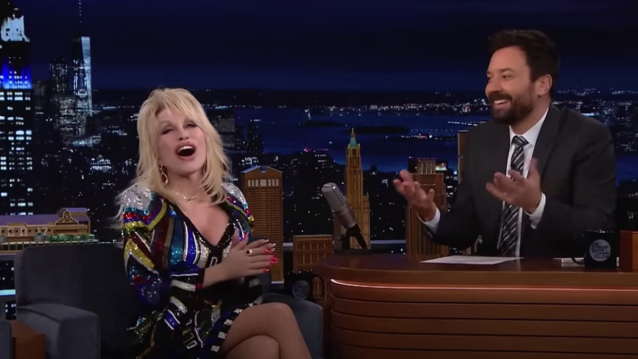 Country music icon Dolly Parton has revealed some more details about her upcoming "rock album", that she will be releasing in honor of her induction this year into the Rock and Roll Hall Of Fame.

Parton originally asked for her nomination be given to a deserving rock artist, but she later accepted the nomination and ultimately her induction, and said that she planned to make a rock album.

Dolly shared a few more details about the effort during an appearance on The Tonight Show With Jimmy Fallon last week, including her plans to cover classic songs from the Rolling Stones, Prince, Lynyrd Skynyrd and Led Zeppelin on the record.

After taking the stage to massive applause from the studio audience, Fallon told Dolly, "First off, congratulations. You were just inducted into the Rock and Roll Hall Of Fame".

Dolly responded, "I'm a rock star now! That's what they say. That was such an honor. You know, I'm making an album too because I have to live up to all that hype.

She then explained her reluctance to be inducted, "Honestly, I was sincere, I didn't mean to start any controversy, but when they said they wanted to put me in the Rock & Roll Hall of Fame, I always thought that was for people who spent their whole life working to be in rock 'n' roll. You don't see Led Zeppelin in the Country Music Hall of Fame...although they could.

"But anyway, I found out it was more than that. So, when I realized what it was, I said if they put me in anyway, I would certainly accept it gracefully. Which I did, I even wrote a song about it to kinda tell the story about it."

She continued, "I'm very honored and very proud," she continued. "I'm good about timing, so I'd always thought I might want to do a rock record, because my husband is a rock 'n' roll freak. I thought, 'If I'm ever gonna do it, now's the time."

Answering a follow-up question, Dolly revealed, "It's gonna come out next fall, and you know what I'm calling it? Rock Star is the name of it... I am going to have some cameo people. I've written a few originals. And we're gonna have some great iconic songs like 'Purple Rain,' '(Can't Get No) Satisfaction,' 'Stairway to Heaven,' 'Free Bird.'

"I even did "Free Bird", she said to an ecstatic Fallon. "But I'm gonna have a few guest artists." Watch the full interview below:

Cheat Codes And Dolly Parton Share 'Bets On Us'