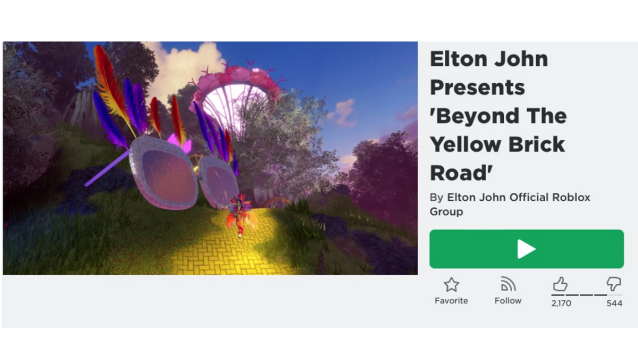 Created by Elton John and Rocket Entertainment with Roblox creators and support from Universal Music Group (UMG), the world leader in music-based entertainment, the virtual experience is live now, offering fans a new way to enjoy his timeless music, express themselves through his iconic fashion co-created with the community, and experience Elton's impact on popular culture in a new, creative, and unique way.

This unique experience will let fans follow the yellow brick road through an interactive world inspired by Elton's life and legacy and discover it through the eyes of the Roblox community, learning what Elton's unparalleled influence means to them. The experience includes Elton's iconic digital fashion and photographs of memorable moments, interactive challenges set to his greatest hit songs, daily scavenger hunts, and trivia quizzes. Designed in collaboration with more than 20 Roblox community creators, the digital fashion collection on virtual display is inspired by Elton's most celebrated outfits and eyewear, including free items made with the Los Angeles Dodgers and Major League Baseball and inspired by the outfit Elton wore at his legendary concert in 1975. Fans can try on complete outfits or mix-and-match individual items to recreate Elton's look on their avatar and shop the full collection available to visitors globally.

Speaking of Beyond the Yellow Brick Road, Elton says: 'I'm absolutely thrilled to be launching Beyond the Yellow Brick Road on Roblox. I've seen the joy that Roblox has brought to my boys, and the possibility it creates by the ability to interact with fans in such an exciting and forward-looking way has been mind-blowing to me. I've always been myself and used my image, eyewear, and music to express myself, and Roblox really encourages that self-expression. Now my fans can do the same, and that's really exciting. At every step of my career, I've always wanted to push forward and look to the future, and Beyond the Yellow Brick Road is the next step on that journey as I prepare to step away from live touring after 50 years on the road. It's genuinely thrilling, and I can't wait to see the response from my fans and the Roblox community."

David Furnish, CEO of Rocket Entertainment, says: "Elton is a visionary creative with a life full of major music and fashion moments significant to the culture of then and now and lived his life like an avatar! Beyond the Yellow Brick Road is an extraordinary collection of some of these moments that we have had a lot of fun recreating with the Roblox community since Rocket Entertainment began this project. As Elton says farewell to touring at Dodger Stadium, we're excited for the opportunities that spaces like Roblox offer to ensure Elton's music and legacy may continue to bring joy to the world."

Sir Lucian Grainge, Chairman & CEO of Universal Music Group, says: "In the decades we've worked together, my commitment to Elton has been to build the largest global audience for his creative genius, spanning his recorded music, songwriting, fashion, and performances. As Elton wraps up his monumental final tour, we are extremely excited to help bring Beyond the Yellow Brick Road to life so that new generations of fans, now and for years to come, will continue to be entertained and inspired by his songs and music."

The Roblox community is also invited to a special performance taking place within the Beyond the Yellow Brick Road experience on Roblox starting on November 17th, with additional performances re-airing hourly through November 20th. Reimagined for limitless creative expression on Roblox, this series of ten-minute virtual performances - made up of Elton's best-loved songs - will offer fans of all ages anywhere in the world an entirely new way to feel part of his final ever U.S. shows. Forming part of his record-breaking and critically acclaimed Farewell Yellow Brick Road tour, the special performances will coincide with Elton's run of Dodger Stadium shows (November 17th - 20th), which will see Elton make history once again as he returns to the iconic L.A. venue for the first time since his legendary performance in 1975.

Virtual experience visitors are also able to earn and collect yellow bricks, the currency used in 'Beyond the Yellow Brick Road,' as they explore interactive challenges, allowing them the chance to gain VIP access to hear a dedicated message from Elton and have their avatar appear on stage with him at his final Dodger Stadium show on November 20th. After the Dodger Stadium concerts, 'Elton John: Beyond the Yellow Brick Road' will continue to live on - with new experiences, music, fashion, and more - as an immersive timeless capsule of his craft in the metaverse.

'Elton John Presents: Beyond the Yellow Brick Road' is the latest new frontier that Elton John is embracing during a dazzling period of creativity and cultural relevance. Having topped the U.K. single charts last summer with 'Cold Heart (PNAU Remix)' with Dua Lipa, his latest smash hit single 'Hold Me Closer' has seen Elton stepping into the limelight with Britney Spears for her first studio recording since 2016. With a chart-topping memoir 'Me' and acclaimed musical fantasy 'Rocketman' in recent years, and the 'Farewell Yellow Brick Road' tour continuing to be lauded by fans and critics alike, his collaboration on Roblox continues to reinforce Elton's ongoing relevance. As fans prepare to bid farewell to Elton John as a touring artist, 'With Elton John Presents: Beyond The Yellow Brick Road' they can continue to experience all aspects of Elton's world in the forward-thinking and thoroughly modern manner we've come to expect from one of the greatest pop culture icons of the 20th and 21st century.

Join Elton Beyond the Yellow Brick Road on Roblox here.