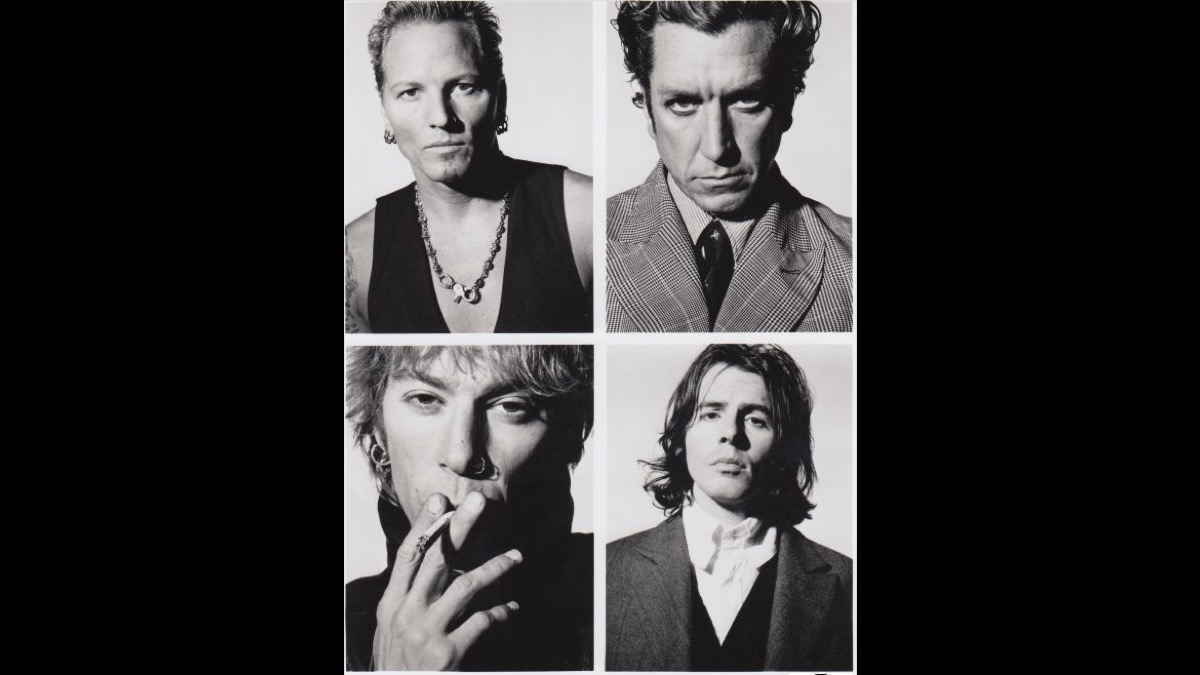 The self-titled debut album from Neurotic Outsiders, a supergroup featuring Sex Pistols, Steve Jones, Guns N' Roses' Duff McKagan and Matt Sorum, and Duran Duran's John Taylor, has been expanded for a reissue that will be released on June 3rd. We were sent the following details:

When former Sex Pistol Steve Jones joined a pick up band for a benefit concert for a cancer-stricken friend at LA's notorious Viper Room back in the mid '90s, he probably had no clue that the lineup he'd choose would result in a full blown record deal with Madonna's Maverick Records for $1million. What started out as a random mishmash of his musician friends - JOHN Taylor (Duran Duran) and Duff McKagan and Matt Sorum (Guns N' Roses) - and a Monday night residency at the infamous club turned into Neurotic Outsiders.

Together, they took all that power they possessed and channeled it into a self-titled debut which was originally released in 1996. Long out of print, Neurotic Outsiders is being re-released as an Expanded Edition, containing all the tracks from the album plus their rare Japanese-only EP. It will be released on June 3, 2022 via Boston-based Supermegabot Records.

"We all were in these high-profile, high maintenance bands with very little actual playing. With Neurotic Outsiders, things felt completely loose," laughs Taylor of the ragtag nature of the band. Originally starting out as cover band that hosted a wide array of surprise guests including Simon LeBon, Billy idol, Izzy Stradlin, Chrissie Hynde, Ian Astbury, Sporty Spice Mel C, Iggy Pop, Brian Setzer, and Slash, the band's own internal chemistry between its four members was so apparent that soon Neurotic Outsiders was born.

As more and more of Jones' post-Sex Pistols originals started making their way into their sets, the band began embracing the new material. Comprised of no frills, guitar-drenched, cracking rock n' roll tunes, most of the originals were unheard material leftover from Jones' Sex Pistols/Professionals days. "He [Jones] gave me the tape of his songs and it became my favorite tape," recalls McKagan. "It sounded like 1979 English punk rock with an American feel. It was rockin'. It was heavy. Jonesy wrote the coolest pop."

Pulling in Talking Heads' Jerry Harrison to harness its power, the self-titled debut was chock full of songs that reveled in the rock n' roll excess of yore which New York Times characterized as "pure Hollywood, honestly, and comfortably vulgar" and Details called "crude punk rock."

Kicking off right out of the gate with the slash and burn of "Nasty Ho" into the pounding sear of "Always Wrong," they unexpectedly sprinkled honest and tender tunes throughout, including the wistful "Union," a rumination on the demise of the Sex Pistols (who ironically reformed just as the song was completed). "Story Of My Life" retells Jones' own addict's lament while Taylor's "Better Way" is "a testament to our sober lives and it was not the song I would have envisioned writing with the co-author of 'Pretty Vacant'."

Other tracks include "Angelina" (a tribute to the inescapable 80's / 90's pink-haired billboard queen of LA), "Good News" (a bitter send-off with the lyric "the good news is you're dying, the bad news is I'm alive"). The album's first single "Jerk" is a standard self-deprecating Jones' track where he proclaims "I'm a jerk" as a chorus. Included are covers Duran Duran's "Planet Earth" (from the Japan-only EP) and a furious rendition of The Clash's "Janie Jones."

Just as the band was starting to gather steam, each of the band members were - one by one - pulled away when their previously inactive bands started reforming again, leaving prospects of a continuation of Neurotic Outsiders swept away in the Viper Room's evening detritus. Had they stuck together, it might have re-energized Jones to continue making music. But as it stands, this currently stands as his final album (he is, by admission, "quite lazy").

"I am proud of that album," smiles Jones through a sepia-toned lens. "This is one album I really do like. I like the songwriting. I like the production and I like the way it's played. We had a fun time making that record and I think it could've done well if we'd all been around to give it a proper push." Watch the video for "Jerk" below: