Johnny Cash Day Will Be February 26th In Arkansas Every Year 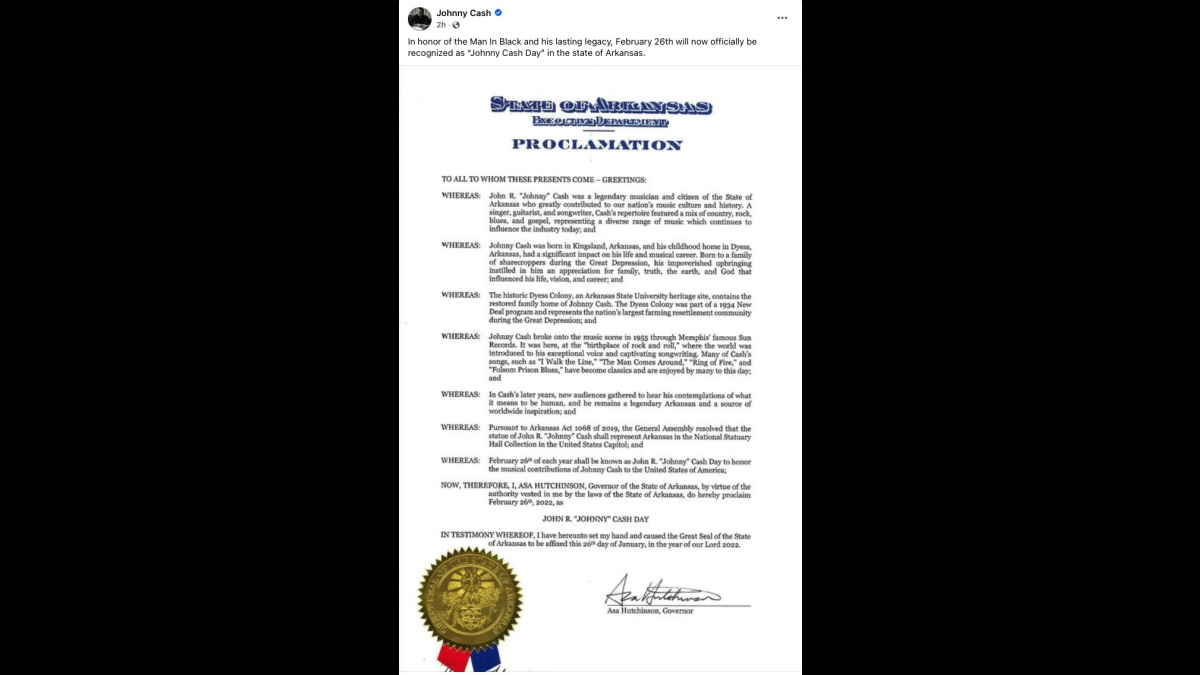 Arkansas governor Asa Hutchinson has issued a declaration that "February 26th of each year shall be known as John R. "Johnny" Cash Day to honor the musical contributions of Johnny Cash to the United States of America".

Here is the full declaration: WHEREAS: John R. "Johnny" Cash was a legendary musician and citizen of the State of Arkansas who greatly contributed to our nation's music culture and history. singer, guitarist, and songwriter, Cash's repertoire featured a mix of country, rock, blues, and gospel, representing a diverse range of music which continues to influence the industry today; and

WHEREAS: Johnny Cash was born in Kingsland, Arkansas, and his childhood home in Dyess, Arkansas, had a significant impact on his life and musical career. Born to a family of sharecroppers during the Great Depression, his impoverished upbringing instilled in him an appreciation for family, truth, the earth, and God that influenced his life, vision, and career; and

WHEREAS: The historic Dyess Colony, an Arkansas State University heritage site, contains the restored family home of Johnny Cash. The Dyess Colony was part of a 1934 New Deal program and represents the nation's largest farming resettlement community during the Great Depression; and

WHEREAS: Johnny Cash broke onto the music scene in 1955 through Memphis' famous Sun Records. It was here, at the "birthplace of rock and roll," where the world was introduced to his exceptional voice and captivating songwriting. Many of Cash's songs, such as "I Walk the Line," "The Man Comes Around," "Ring of Fire," and "Folsom Prison Blues," have become classics and are enjoyed by many to this day; and

WHEREAS: In Cash's later years, new audiences gathered to hear his contemplations of what it means to be human, and he remains a legendary Arkansan and a source of worldwide inspiration; and WHEREAS: Pursuant to Arkansas Act 1068 of 2019, the General Assembly resolved that the statue of John R. "Johnny" Cash shall represent Arkansas in the National Statuary Hall Collection in the United States Capitol; and

WHEREAS: February 26th of each year shall be known as John R. "Johnny" Cash Day to honor the musical contributions of Johnny Cash to the United States of America;

IN TESTIMONY WHEREOF, I have hereunto set my hand and caused the Great Seal of the State of Arkansas to be affixed this 26th day of January, in the year of our Lord 2022.

Johnny Cash Day Will Be February 26th In Arkansas Every Year