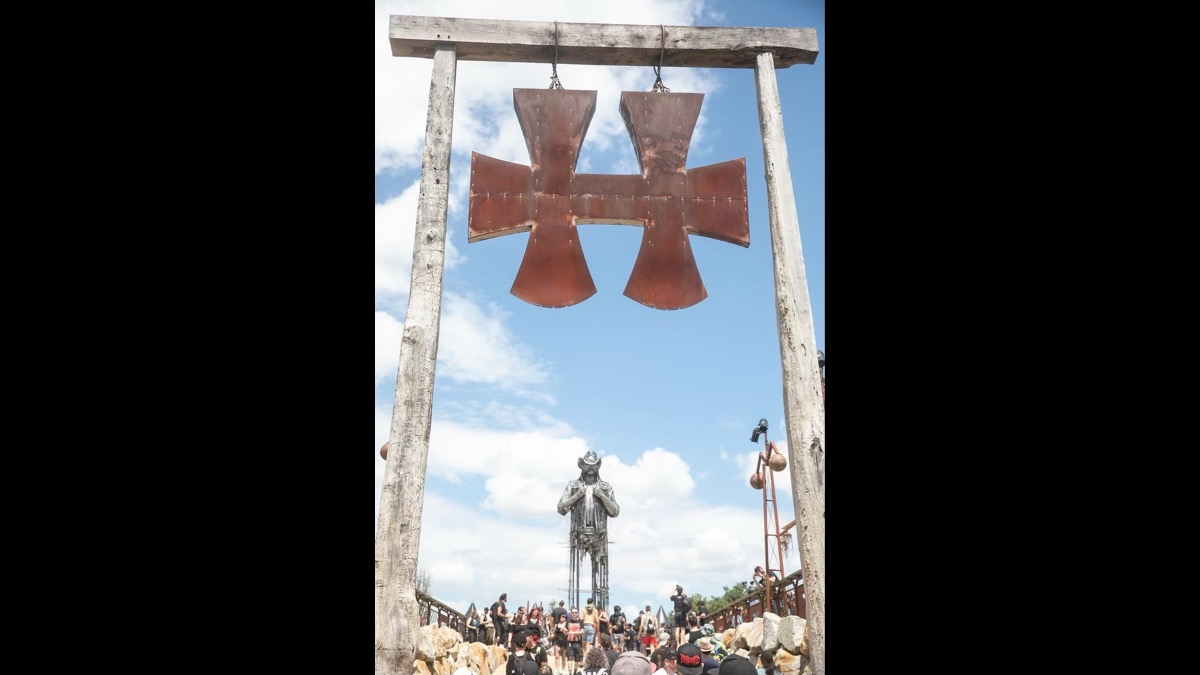 (Adrenaline) Hellfest in Clisson, France, returned with two sold-out weekends packed with some of the biggest names in rock and metal music. It also hosted the first international memorialization of the Grammy-award winning rock legend, Motorhead's Lemmy Kilmister, with a ceremony featuring band members Phil Campbell and Mikkey Dee which was witnessed by tens of thousands of fans.

"It was a very unique ceremony for a very rare and much loved man," said Motorhead's manager Todd Singerman, "Lemmy was a true road warrior, and starting with this historic Hellfest ceremony, we can continue to make sure he remains one."

The proceedings began when the Scorpions asked Phil to join them on stage, for a roaring end-of-set "Rock You Like A Hurricane". After the band had taken their final bows Phil and Mikkey returned to the stage to announce the enshrinement of Lemmy's ashes at the huge, 36 foot monument of Lemmy created by sculptor Caroline Brisset on-site, explaining the significance of bringing Lemmy to the fans in this unique way. A tribute video to Lemmy then played on the festival screens as Phil and Mikkey made their way to the massive monument, where Lemmy's ashes are housed in a miniature replica of the urn used at his funeral at Forest Lawn Cemetery in Hollywood, and lead the audience in raising a toast to Lemmy.

The Hellfest ceremony launches what will be a long-term series of memorializations to the legendary frontman which will see portions of his ashes enshrined at various places of great personal significance to Lemmy around the world. Recently, close friends of Lemmy's received bullets containing small portions of his ashes so as he could remain close to those he loved.

"You cannot overstate just how much a man of the people Lemmy was," said Motorhead's manager Todd Singerman, "which is why it is so important to enshrine him in his favourite places so he can always be with his fans and they can be with him. We have several places already outlined, and all are places Lemmy truly loved on and off the road."

These ceremonies will continue to allow the fans to congregate and honor Lemmy beyond his central resting place at Forest Lawn Cemetery in Hollywood, California, at the same time celebrating Lemmy's truly international spirit, presence and immortality. And as was seen by the reaction of both the fans and global media on June 23, this completely unique commemoration will not only see Hellfest 2022 remembered as the year Lemmy finally returned to one of his favorite touring haunts, but also as confirmation that Lemmy Lives Forever!!