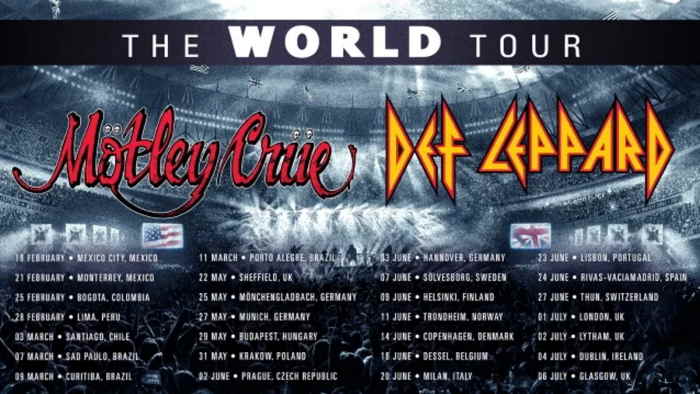 Following their successful North American Stadium Tour this summer, Motley Crue and Def Leppard have announced that they are teaming up again for another coheadlining trek, dubbed The World Tour.

As the name implies, the tour will visit various markets across the world next year, kicking off on February 18th in Mexico City and wrapping up in Glasgow on July 6th.

Def Leppard frontman Joe Elliott had this to say, "After finally getting back on the road and having a monumental summer tour in the U.S. and Canada this year, we're beyond thrilled to be bringing this massive stadium tour to major cities all over the world, and kicking off Europe in Sheffield where it all started for us 45 years ago. We're looking to forward to seeing you out there, somewhere soon!"

Motley Crue added, "We had an incredible time playing 'The Stadium Tour' in North America this summer and we truly can't wait to take the show around the globe with 'The World Tour' in 2023.

"Crueheads in Latin America and Europe: Get ready! We're coming for you next and can't wait to finally see all of you out there again next year!"