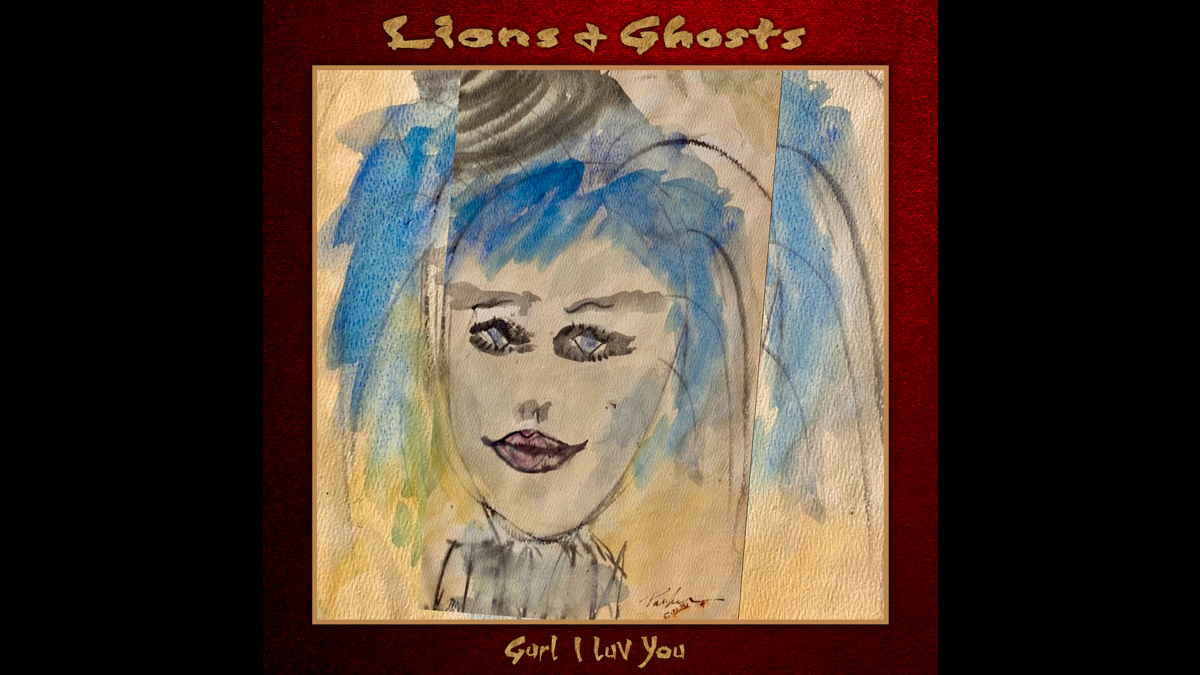 Lions and Ghosts just released their brand new single, "Girl I Luv You", and to celebrate we asked guitarist Michael Lockwood to tell us about the track. Here is the story:

Shockingly, I am writing about a song that never should have been. After some thirty-some years reconnecting with an old bandmate is odd enough, but to sit down and write a song in a way we never have is even stranger.

Right before the world collapsed into the pandemic, I received an email asking if I could record guitar on a couple of songs for a local LA artist. I said, of course, and being that I had a studio in my house, all the better to pour a cup of coffee and never get out of my pajamas. Sign me up.
A second email came right after saying the session was at a studio in the Hollywood Hills. Said studio belonged to Rick Parker, Singer of Lions & Ghosts but more recently Producer/Mixer extraordinaire. I had not seen Rick in years, maybe once or twice since I left the band in 1989. It would be an exciting experience, to be sure.

I had a listen to the songs we were going to be recording. I made some mental notes, Visualized the soundscape and packed my gear, and, to be honest, collected myself a bit because I was a tiny bit nervous. I could not tell you why.

As I walked through the studio door, it was as if time stood still. 1989 and... It was an incredible night of great stories, true confessions, and some great music. It was a session to remember, more like a therapy session. Being in a band in your early twenties is akin to being married to three other people. It's a lot. You are just coming into your own and testing all boundaries. We were all growing, not just musically but emotionally as well. There were lots of good days, and yes, there were bad ones. It's hard to remember most of the bad ones. We left, saying we would be in touch. Soon after, Rick and I shared a Dropbox folder of ideas he and I had sitting around. I was just starting a new writing project, most of which went to Apple for their Memories campaign. Although I had a couple things I thought might work for Rick and me. I started messing around with some of the songs Rick had sent me, and eventually, we thought being in person might speed things up a bit.

Gurl I Luv You was born that night. I had a tune playing in my head that needed to come out. I played it for Rick that night. We started messing with the arrangement, playing back and forth with acoustic guitars. It really was a way we had never worked before. In Lions & Ghosts, ideas were always brought in mainly realized, and then the band would dissect and put their own stamp on it. That evening in the studio with Rick, it was tit for tat. A real collaboration. I laid down all my acoustic guitar bits that evening. Soon after, Rick had his friend and drummer John Wilmer come over and play drums to my outlined arrangement. A few days later, Rick sent me the track with a stunning scratch vocal and bass part. I began my work to sculpt the sonic landscape. Everything fell into place almost immediately. Electric 12, slide and rhythm guitars. I layered in a Mellotron and a tiny bit of synth parts. Listening back, I was pretty happy with where it was all going. I uploaded everything to Dropbox to share with Rick. The song was almost finished. It needed the thumbs up on the vocal track and perhaps some backing vocal parts.

Crickets, as we slipped into the pandemic there was no word from Rick. I sent him a couple texts but no response. I thought, well, leave it. Time marched on, and I would listen to the track every once in a while, and I thought, I can't let this go. It's headed down a great path.

Last December, as I lay on the couch recovering from Covid, I thought, you know I have to reach back out to Rick. Instant response. He had never seen the tracks I had sent him, and life got busy. I told him I really would love to finish the song. He agreed. He sent me a new basic track and mix, in which he had changed the lyrics and shortened the arrangement. When I heard it, it morphed into this shiny little jewel. I thought I had to reach out to Patrick Warren to write a string arrangement. He and I have worked together for more years than I can count, crafting music with Aimee Mann, Fiona Apple, and others. He sent back a perfect Octet arrangement that was ideal for the song. I sent this and all the guitars to Rick. The mix he sent back was perfect. Muscular but not overstated. So pleased.

The pandemic had subsided. I went to Rick's studio, and we listened to the mix together. What a journey of a two year song it was. We were both full of smiles. Rick said, "Strange, it sounds like Lions & Ghosts" That still makes me giggle. We started talking about the lyrics for which Rick was solely responsible. He said to me that, like most of his lyrics, they are open to interpretation; he liked the listener to be able to find their own meaning within the words. Which I quite liked. He always has had incredible imagery. Rick did say, however, that he had changed them more recently. He had thought about my life, some of the things I had been through in recent years, and thought there was a bit of that in the lyric.

What a wild ride for a little song written by two fellows who had not played a note together in thirty years.

So here is the little song that could.

Lions and Ghosts Music and Merch