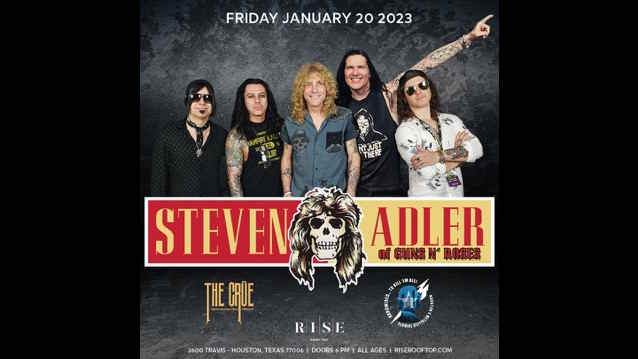 (Life And Timez) "Houston, prepare for liftoff!" announces Steven Adler of Guns N' Roses fame as he prepares to bring his solo band to Rise Rooftop in Southeast Texas on Friday, January 20th for an incredible recreation of the high-octane heavy metal that made Appetite for Destruction one of the biggest albums in the history of rock.

Guns N' Roses rocketed to fame from LA's Sunset Strip with their debut album Appetite for Destruction, which has sold over 30 million copies to date. Adler, or course, is credited by his bandmates as the anchor of that record.

"To Steven's credit, and unbeknownst to most, the feel and energy of Appetite was largely due to him," said GNR guitarist Slash in his autobiography.

Although Adler now focuses on a solo music career, he is still known to sit in with his former GNR bandmates from time to time. Similarly, Duff McKagan and Izzy Stradlin have made surprise appearances at Adler's shows.

Steven Adler and his band of all-star musicians from around the world will be descending on Houston at the beautiful state-of-the-art Rise Rooftop entertainment complex and nightclub on January 20th. Tickets for the event are available here.

"Who doesn't love the great music fans in Texas?" quips Adler, one of Rolling Stone's 100 Greatest Drummers of All Time. "I can't wait to share the music of Guns N' Roses with the faithful in Houston at Rise Rooftop. It's going to be a must-see show!"

"You don't bet better than Michael Thomas and Alistair James, they are two of the best guitarists in rock.," notes Adler.

Front man Kamin was a well-known rocker in Argentina with such bands as Criaturas Salvajes and Son of a Gun when he was selected to come to the U.S. and join Adler in electrifying audiences with the music of Guns N' Roses. Audiences have been blown away.

"Ari Kamin is the total package. He's everything a rock n' roll front man is supposed to be," praises Adler. "Not only does he have an incredible voice, he really connects with the audience. He's one of the best you'll ever experience."