Frankie Goes to Hollywood made quite a splash in the '80s even though they only released two studio albums and a greatest hits collection. All three are once again available on vinyl. 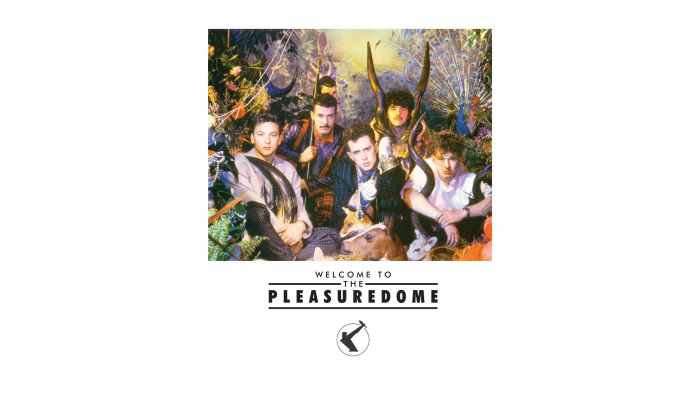 When Frankie Goes to Hollywood released their debut album, the 2-LP Welcome to the Pleasuredome, BBC Radio in England unintentionally did them an enormous favor. The Beeb refused to play the album's first single "Relax" due to sexually-oriented lyrics which are, by today's standards, tame. Word spread quickly worldwide that the BBC had banned the record, and of course everybody wanted to hear the song immediately. So while the lucky ones had already heard the album, "Relax" was the first taste of FGTH for most, and the whole album, full of high-energy dance music with pop and prog overtones and great vocals from Holly Johnson, was a hit. Sales would also be pushed along by the super catchy "Two Tribes," aided in part by its video showing two "fat cats" duking it out, reflecting the zeitgeist at the time of corporations, politicians and nations (clearly the song is still apropos today.) Besides the great original cuts on Pleasuredome the band shows the depth of their creativity with a cover of the Temptations Vietnam War-era hit "War," an extrapolation that can safely be called the most intriguing interpretation of the song ever made. Other covers include a snippet of "Ferry Cross the Mersey" originally by fellow Liverpudlians Gerry and the Pacemakers, a take on Bruce Springsteen's "Born to Run" and the Bacharach/David chestnut "Do You Know the Way to San Jose." The band's fondness for prog was on display in original cuts like the sinuous "Wish the Lads Were Here"/"Ballad of 32," perhaps showing the influence of producer Trevor Horn (Yes, the Buggles.)

Everything that Pleasuredome was, follow up album Liverpool was not. Disappointing sales of the title and band infighting led to a breakup, with Liverpool being the group's swan song. Despite all that, there's lots of good music on Liverpool. The album begins with "Warriors of the Wasteland," where fans of early Genesis will notice stylistic similarities. Favored cut "Rage Hard" also has a pretty obvious influence; David Bowie. Probably the album's most-played cut, the anthemic message of "Rage Hard" and its music both still resonate today. "Lunar Bay" is a fun dance cut with bits of orchestration done on synth and a fairly high BPM while "Is Anybody Out There," being downbeat and dreamy, is totally the opposite. There is a noticeable lack of "camp" on Liverpool compared to Pleasuredome and perhaps that is another reason why the record was mostly overlooked.

Bang!... The Greatest Hits of Frankie Goes to Hollywood is exactly as it indicates. Featuring 13 cuts on 2-LPs, most listeners will find all their favorites here; "Relax," "Two Tribes," "War," "Warriors of the Wasteland," "Rage Hard," "The World is My Oyster," "The Power of Love" and the full 13-minute-plus version of "Welcome to the Pleasuredome." Also included is a full version of "Ferry Cross the Mersey" which is heard only as a snippet on Pleasuredome.

All three titles are housed in jackets replicating the artwork of the original releases, with Pleasuredome being a gatefold.