Rob Grabowski caught KISS In The Act during their "End of the Road" tour stop at the Hollywood Casino Amphitheatre in Tinley Park, Ill. on Saturday, October 16, 2021. Check out Rob's great review and photos! 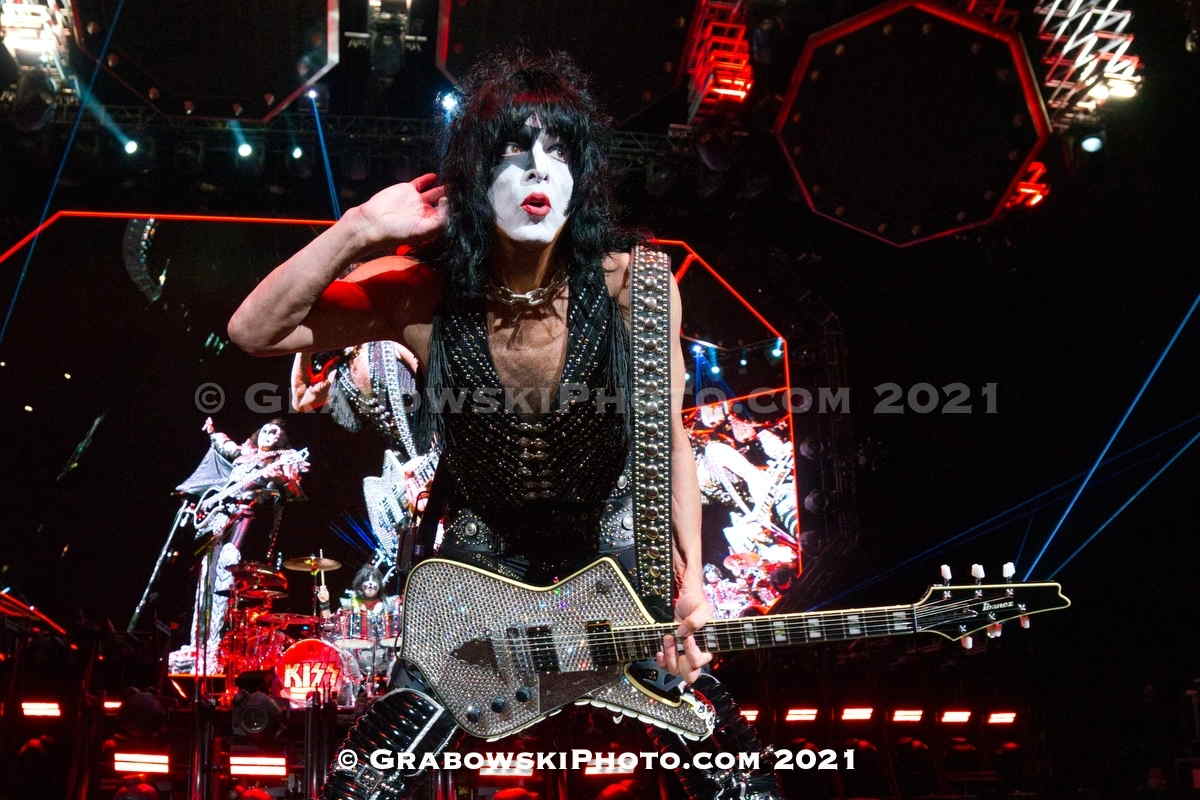 KISS made their way to the Chicagoland area Saturday night on what may potentially be their last tour since they are touring behind the 'End Of The Road' tour and look to hang up the 7' inch heals. While I, and the thousands in attendance, were enjoying what may have been one of the finest shows from the fellas in make-up, I can't help but think could this really be the end? More on that later... 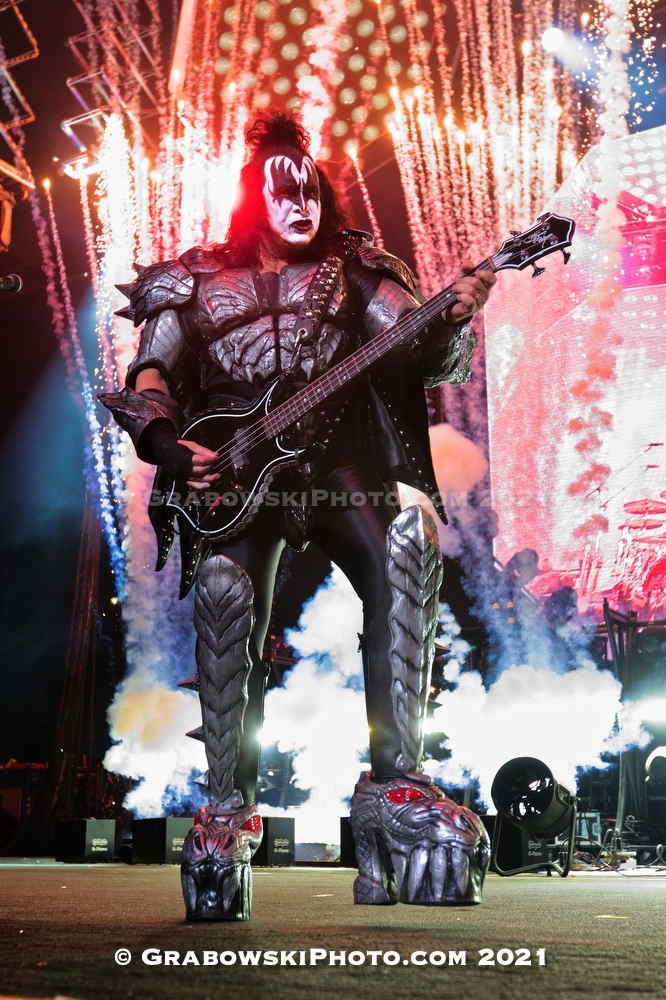 As Gene and Paul did every KISS type motion from, Paul with his playful banter, flying across the audience, shaking his behind for all of the ladies in attendance, telling stories of yesterday, and Gene with his deep growl, " Oh Yeah's," and his pointing at everyone and really connecting to the lucky ones up front, his breathing fire, his spitting blood and flying into the rafters, this is truly one of the greatest shows ever. KISS has always been about having fun with the music and putting on a memorable show. What more could you ask for? They played 2 hours with an incredible set list and perhaps the time off due to Covid over the past year and a half really energized them. Paul and Gene have never sounded better and are playing like they are having the time of their lives. Having Eric Singer and Tommy Thayer is still a sore spot with the die hard fans that still long for Ace and Peter but, they are very talented musicians and really add a fantastic dynamic to the group. Eric is a phenomenal drummer and his singing really helps with the harmonies for Paul and Gene. Tommy really plays with grit and determination while making it look easy and fun. He adds a unique quality that lets Paul and Gene shine through and he know that they are the two members that everyone wants to see. Don't get me wrong, I very much miss seeing Ace Frehley and his awkward way of walking around the stage and his cool arm movements as he would do his signature guitar licks. He also had some of the more memorable songs he sang from the KISS catalog but, since that isn't an option for the fans, the members that are there really are glued together well. 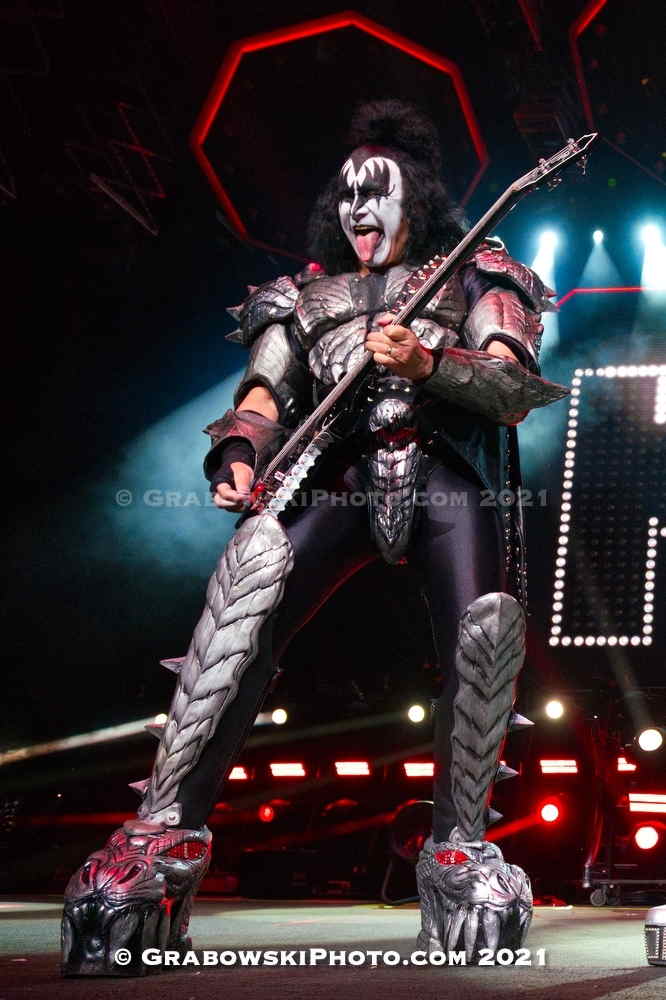 Some of the highlights from the evening were definitely, "Tears Are Falling" and "I Was Made For Loving You." Paul really got to show his vocal range with these and how he can still hit those higher notes. They even have a more updated feel being played live than the original recordings which the crowd welcomed and even opened a few eyes for those that may not have been as familiar with these gems. 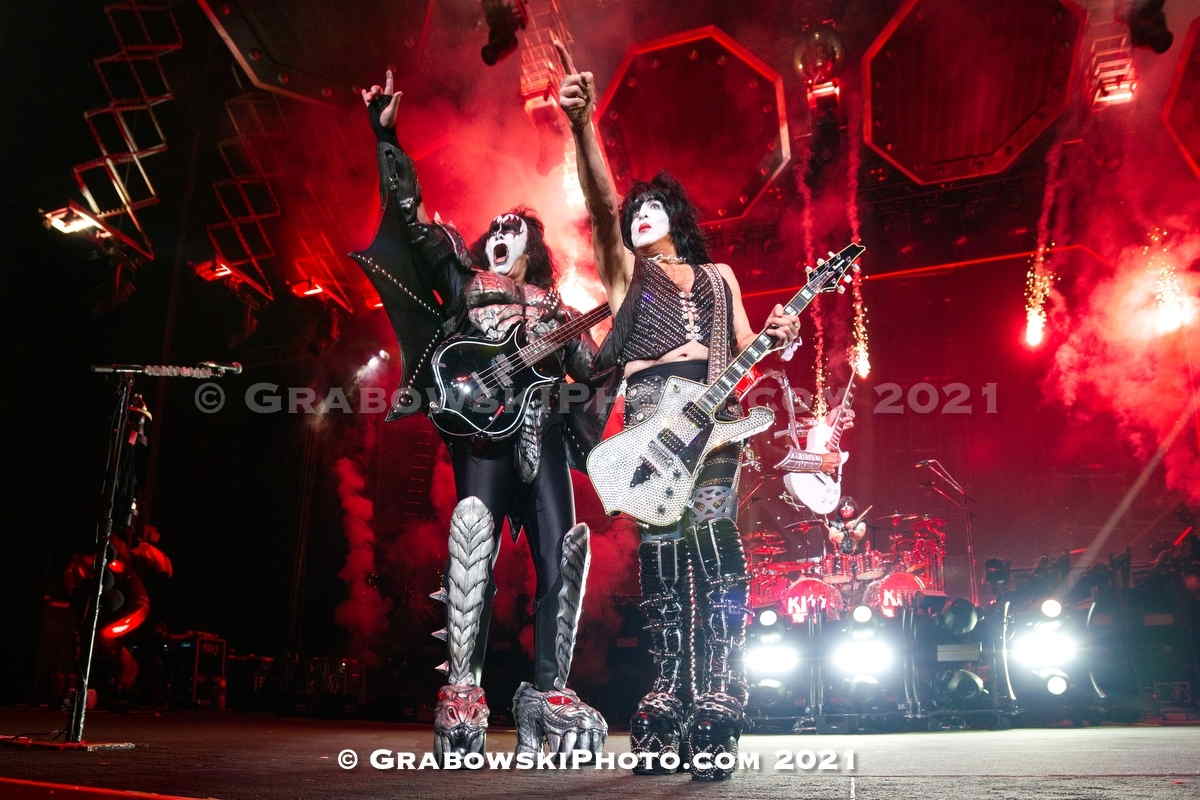 Of course the confetti canons were going while they ripped into their most famous song and the rock worlds, national anthem, "Rock 'N Roll All Nite." With the crowd screaming with whatever voice they had left, I know mine was shot, and as I made my way towards my car I couldn't help but think is this the end of the Rock world Superheros? They have a song called "A World Without Heroes" and I have heard Gene and Paul in numerous interviews say that when you aren't getting your money's worth at a rock show, call us and we will save the day. It's so very true that every athlete hangs it up when their skills diminish or they aren't having any fun any more but, KISS is still on the top of their game. If they aren't having fun, the deserve an Oscar for the performance they are giving. I couldn't believe for a minute that they aren't having the time of their lives up there. The Rolling Stones are still going strong even after the passing of original member, Charlie Watts. Why couldn't KISS keep this going? They already do whatever they want and how they want it so why call it quits? Is it better to burn out than to fade away? Questions I hope they will ponder and perhaps even with the time off during the pandemic, they came to a realization that not only the Rock world, but the regular every day world the rest of us live in, need to have our Rock Superheroes in it. What would happen if commissioner Gordon shined the Bat light and Batman didn't come to save the day? That's exactly what we need is to shine the KISS light high in the sky so when I am seeing some new band that isn't doing it right, the masters can come back and save the day! They ask in the beginning of every concert as they emerge to the stage, " You wanted the best, You got the best, The hottest band in the world, KISS!" I am sure everyone that was in the audience on this chilly Chicago night is praying that when they give that battle cry out, KISS will be there to answer the call! 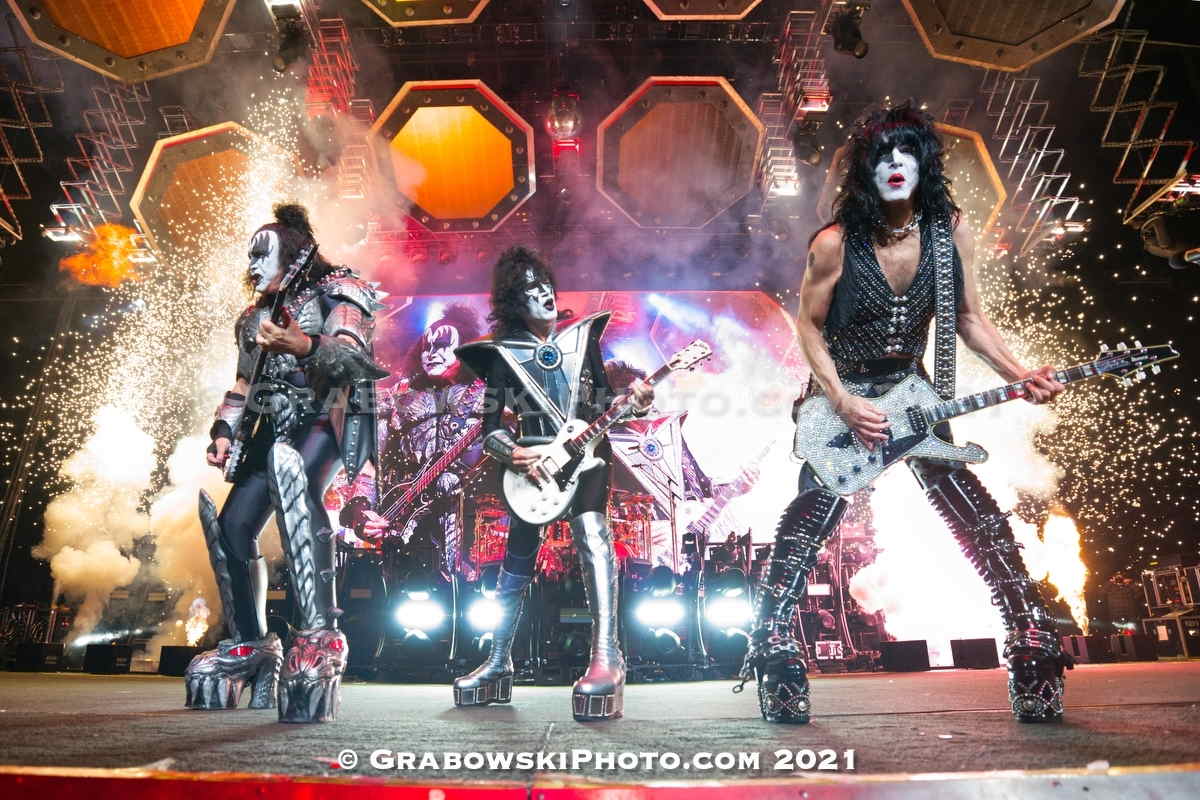 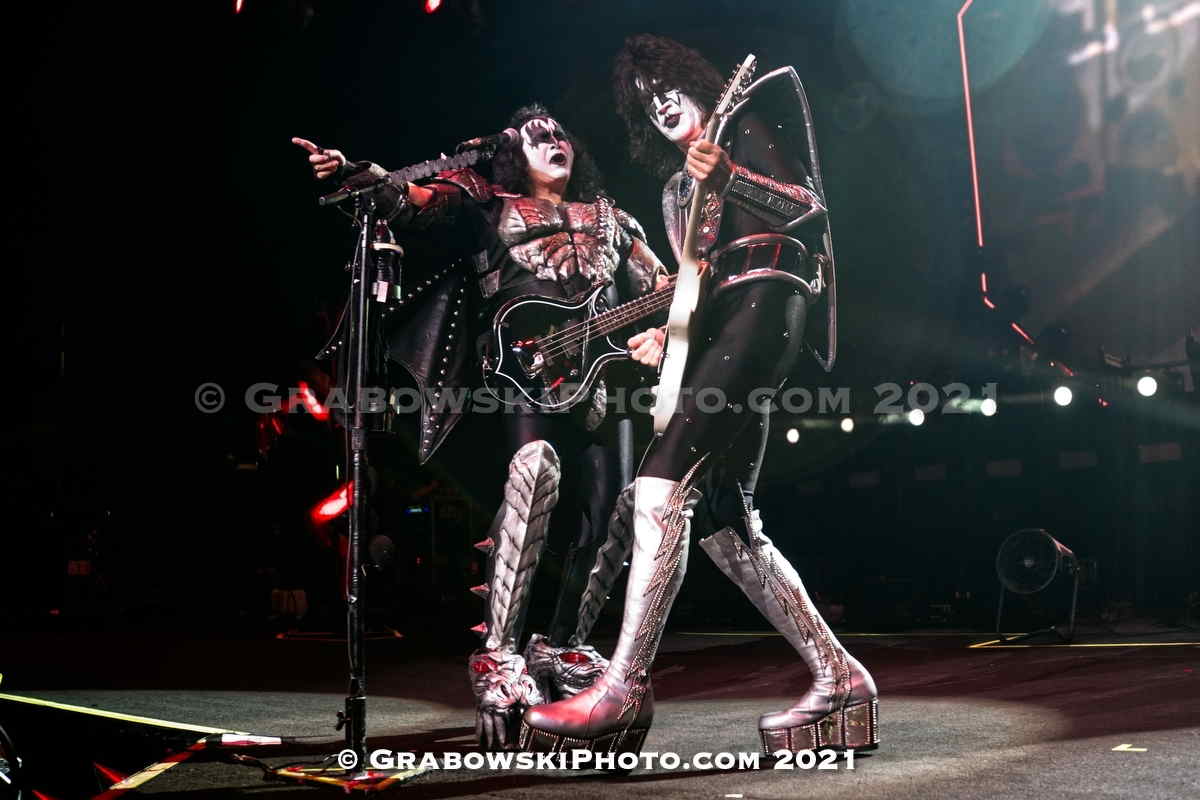 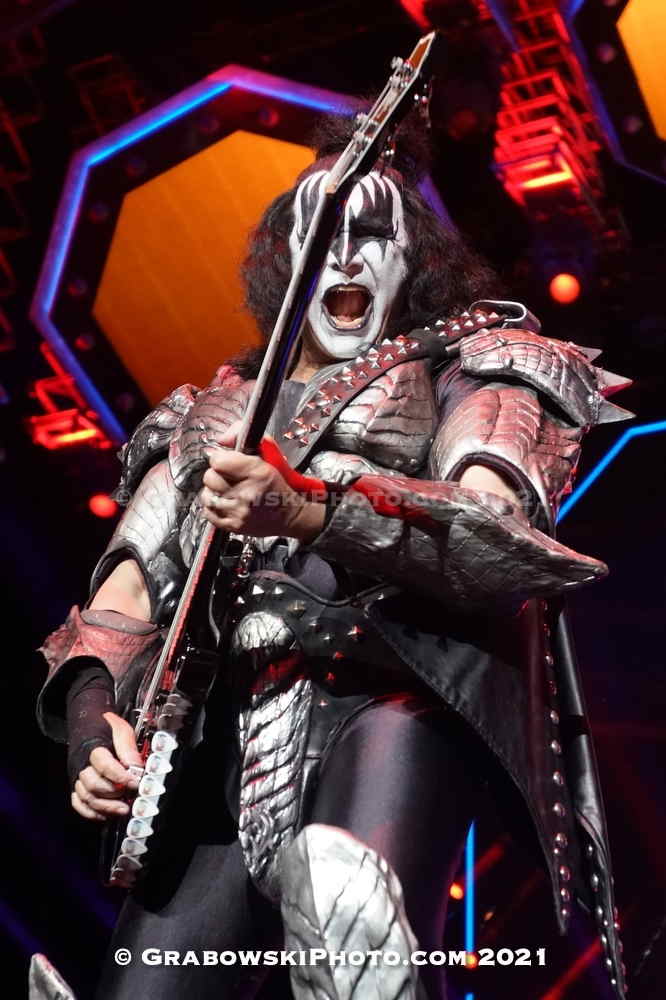 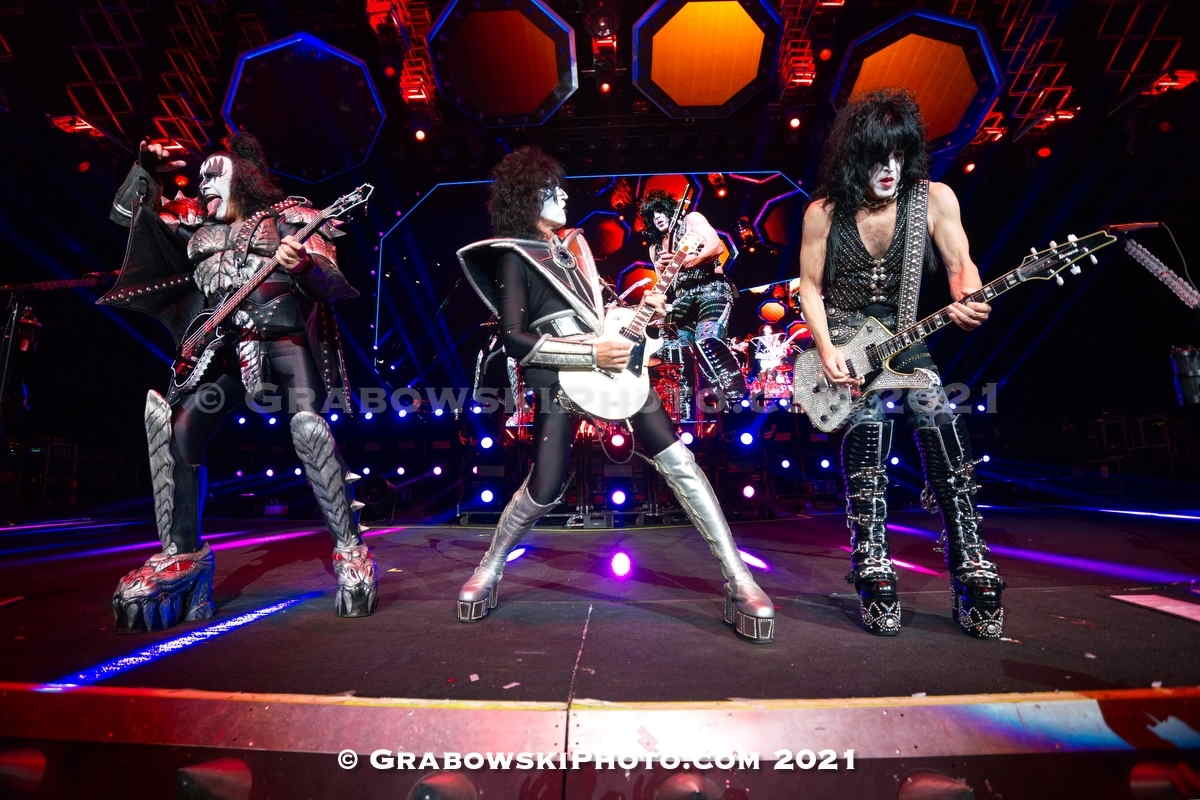 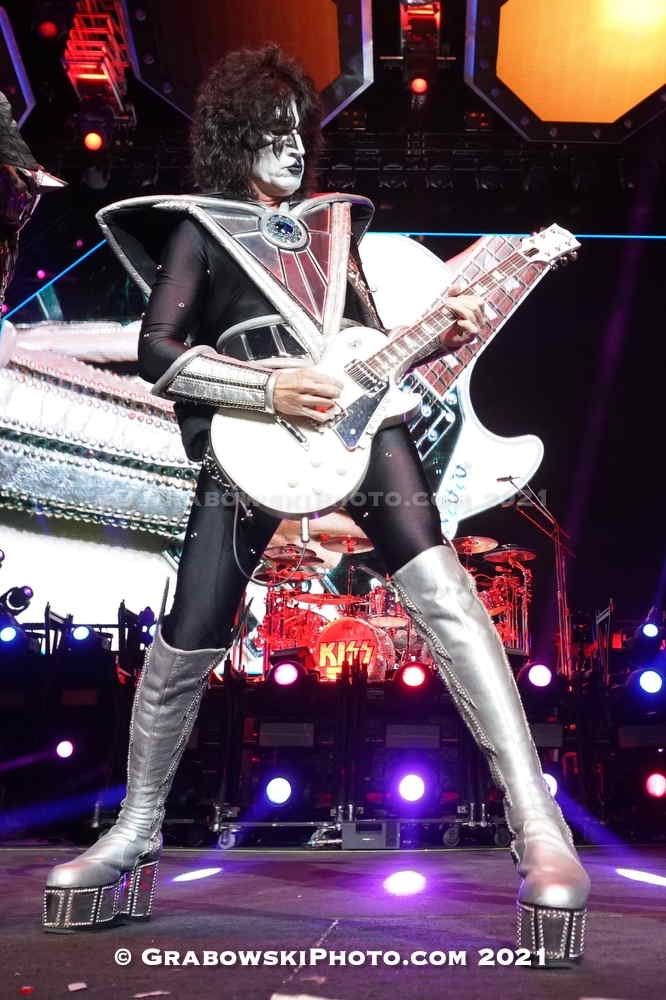 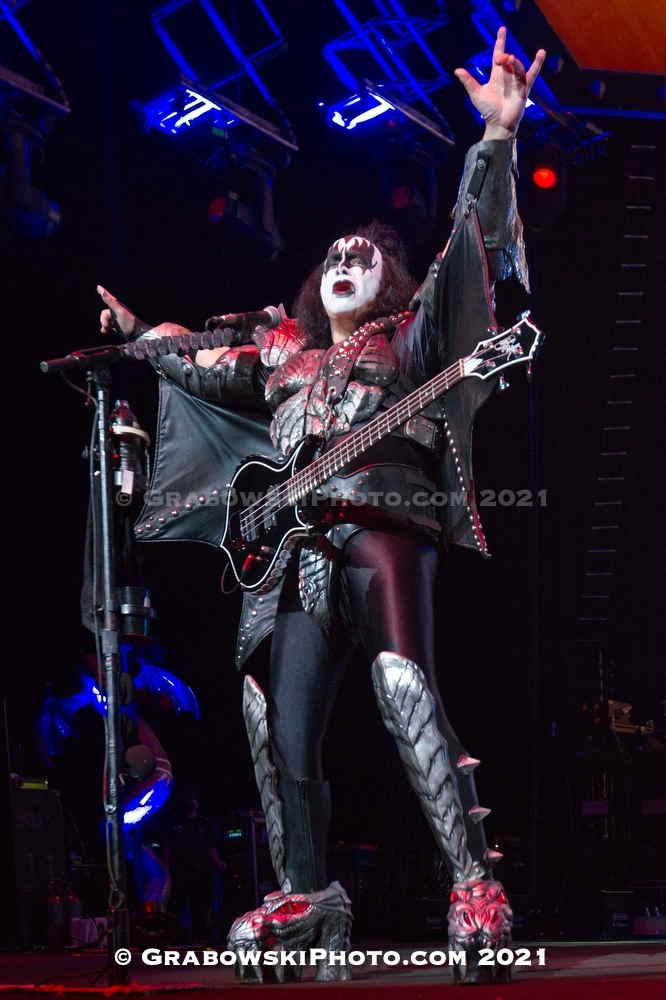 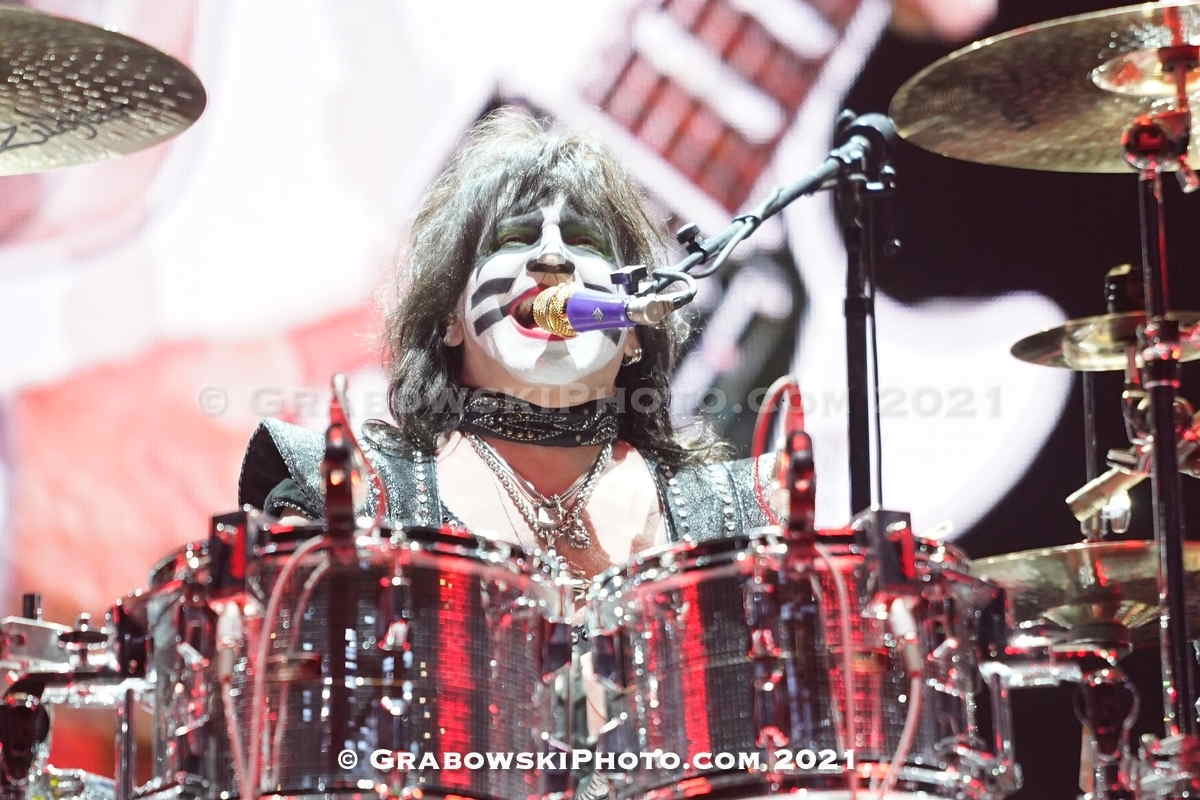 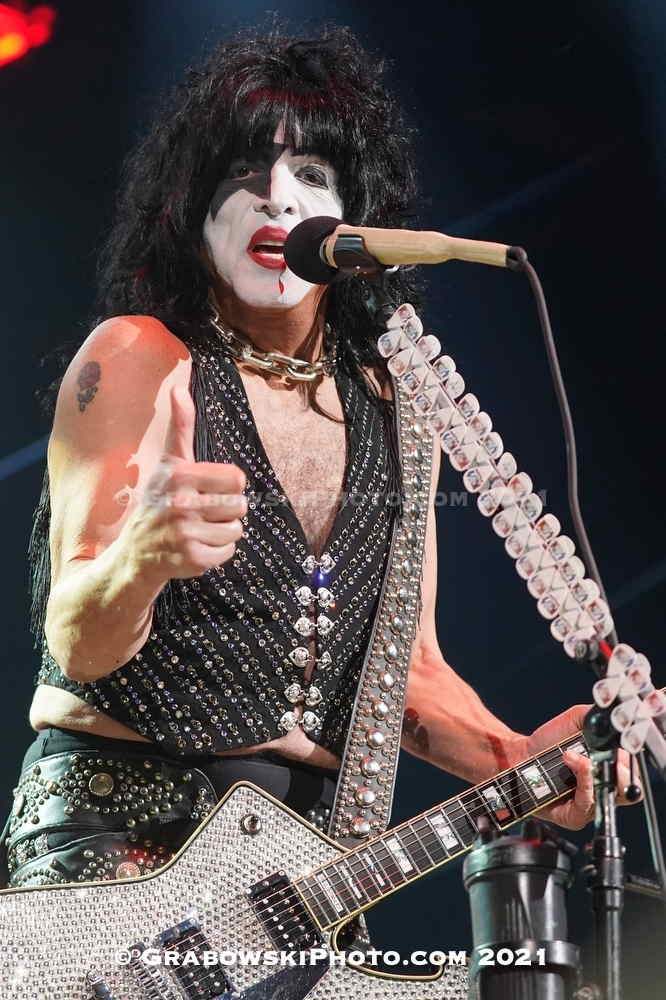 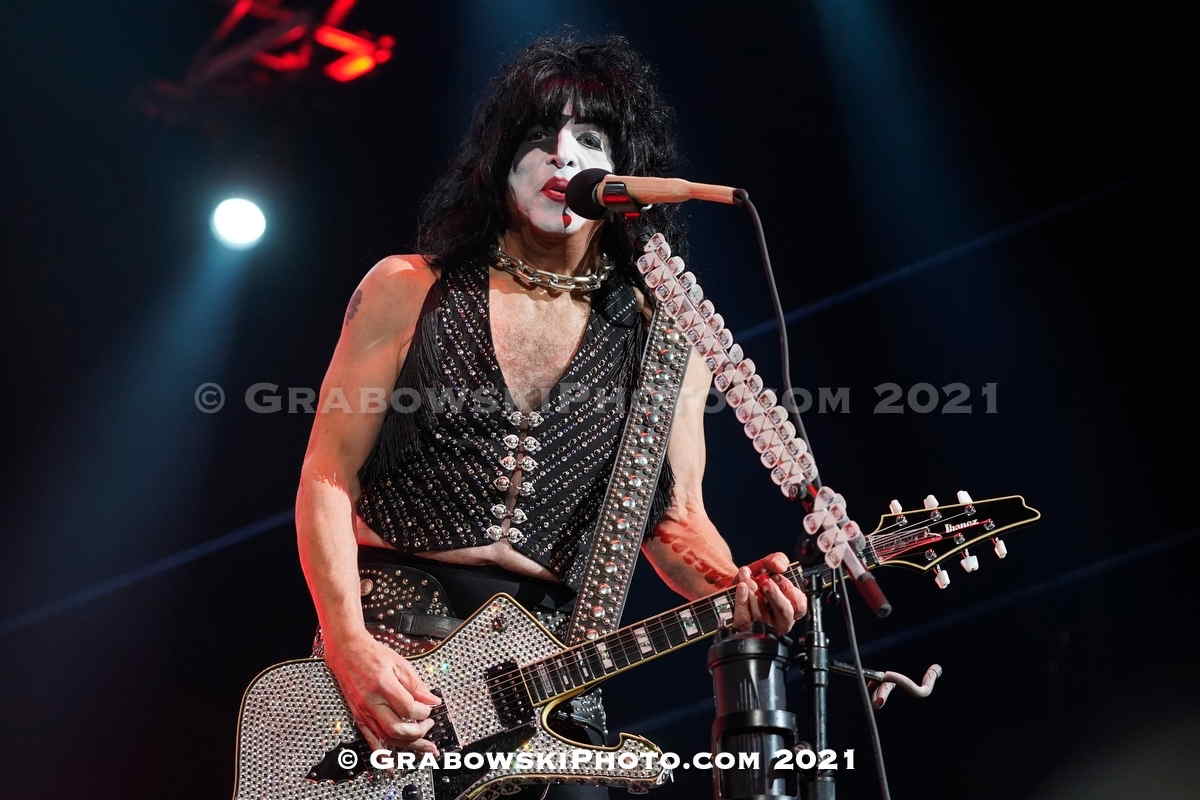 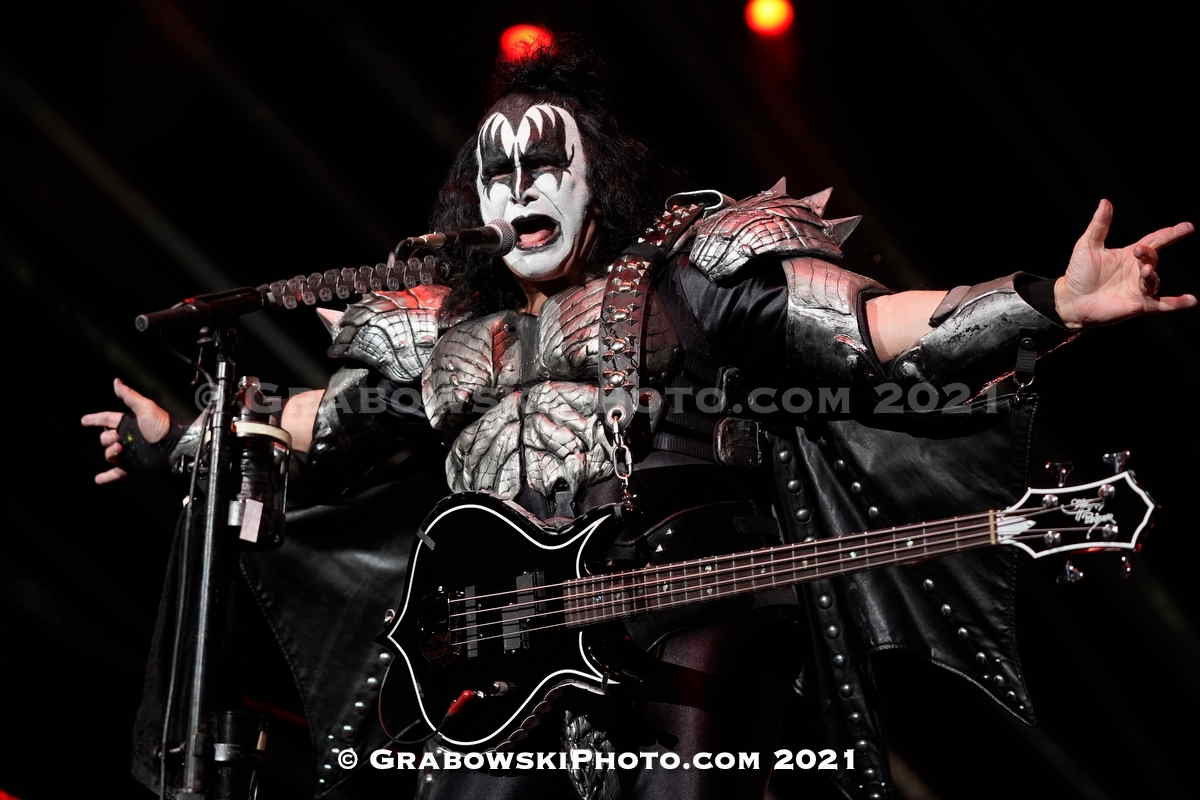 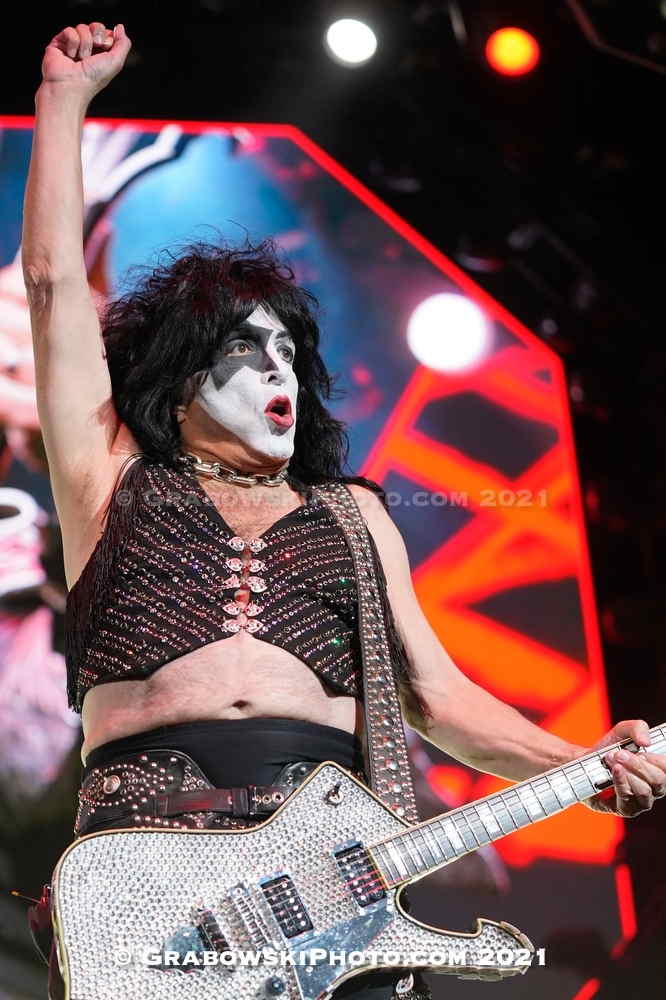 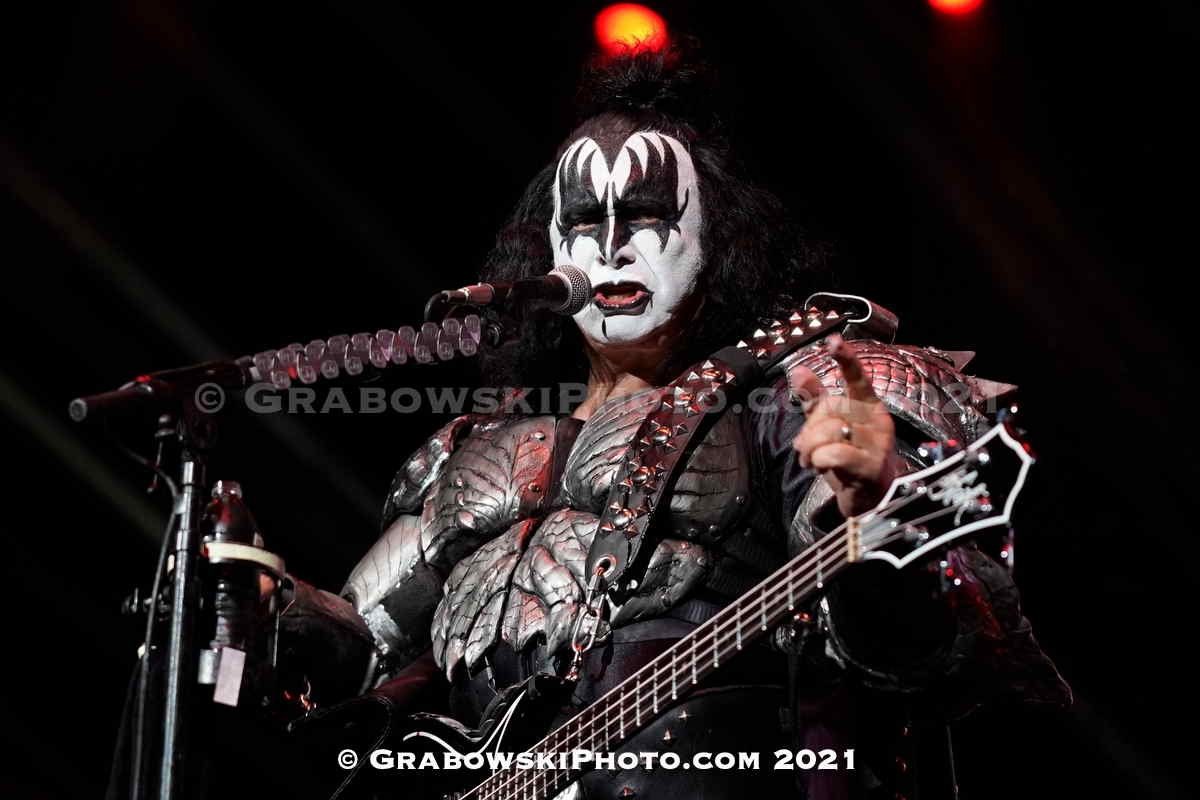 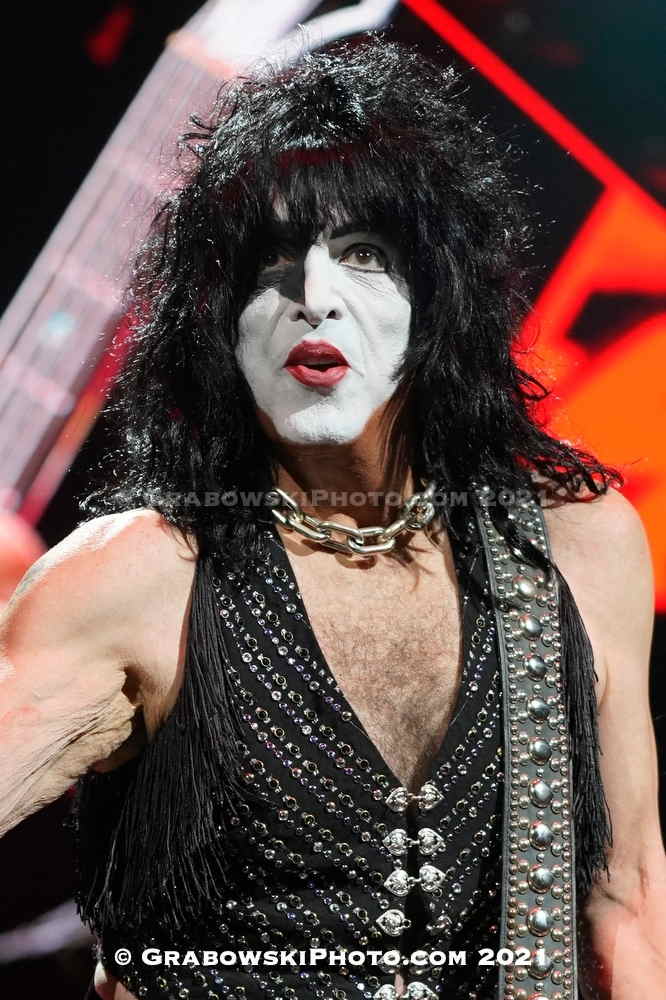 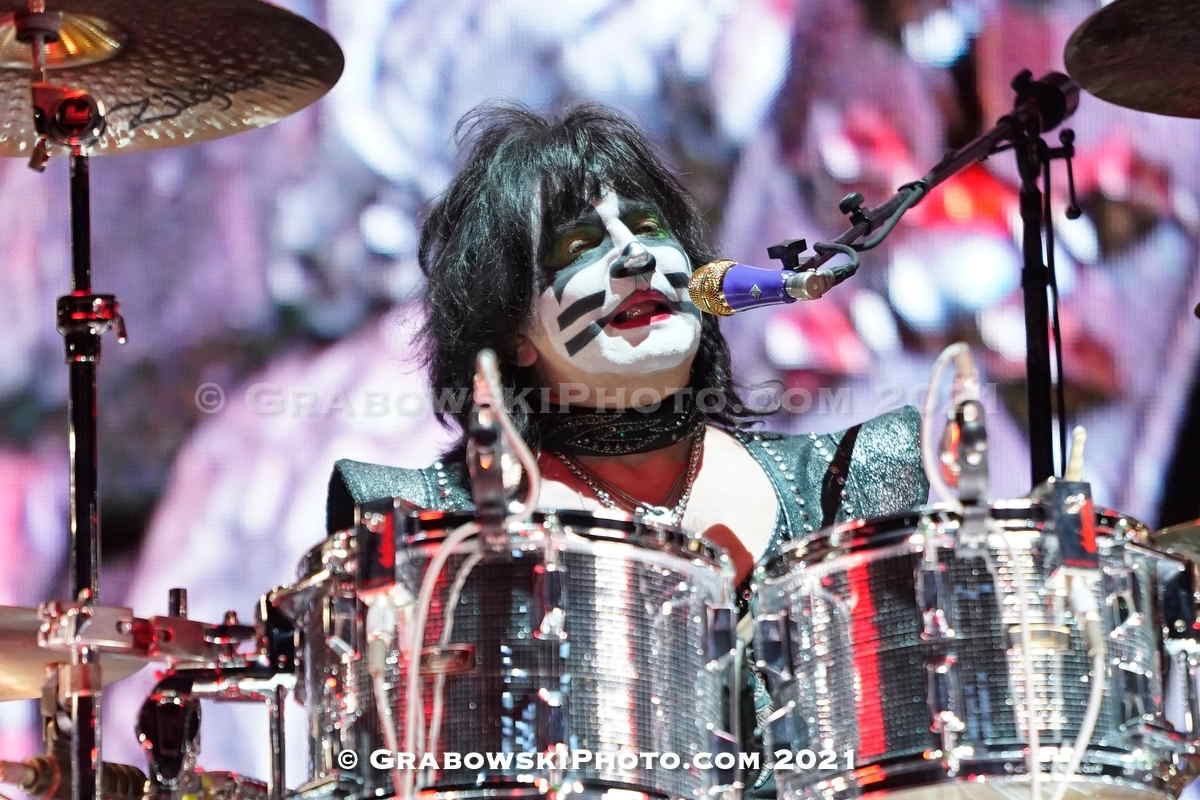 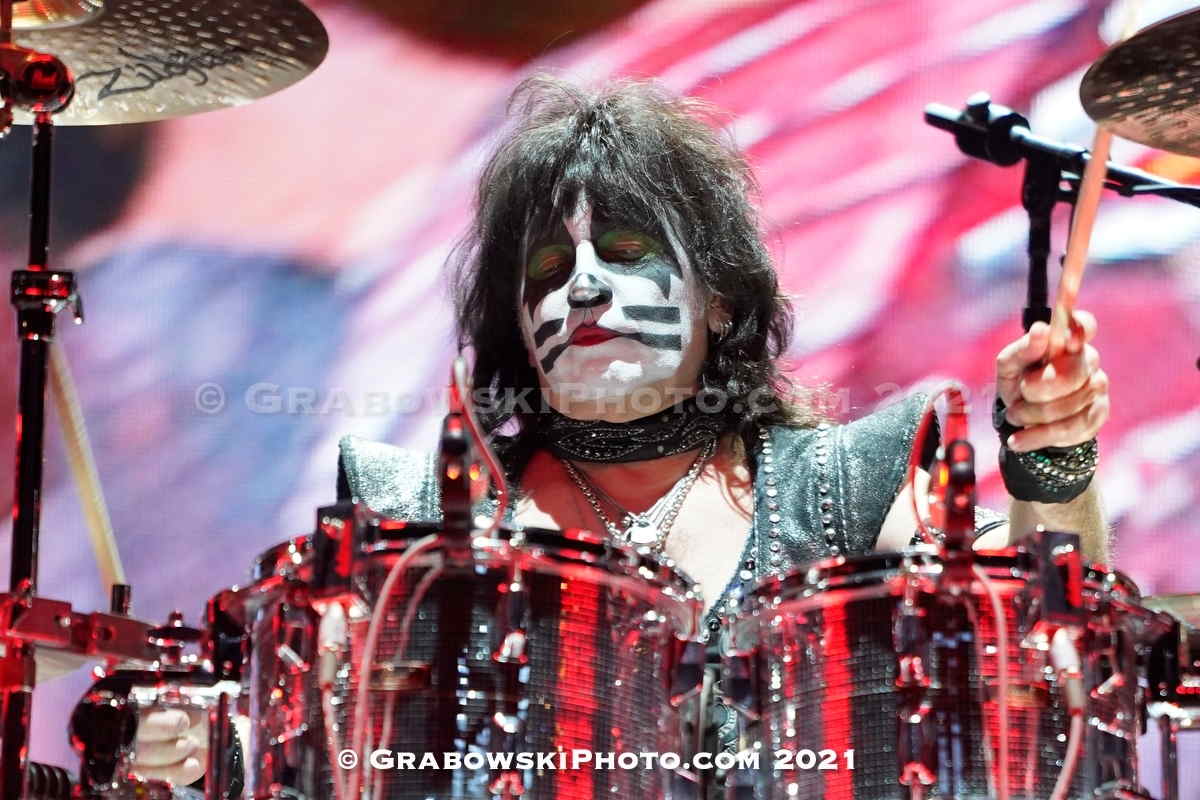 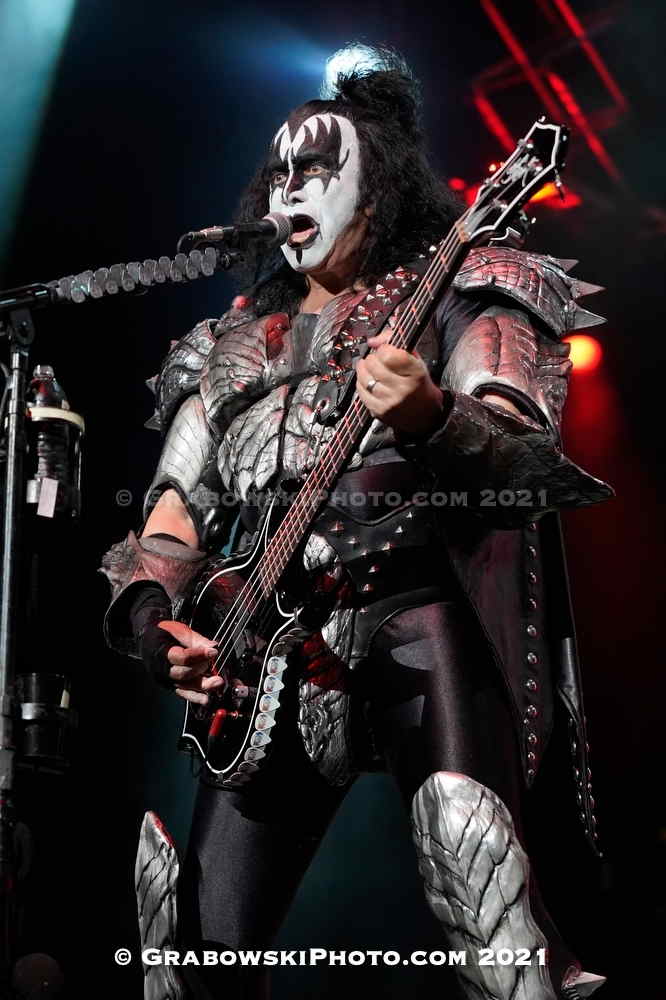 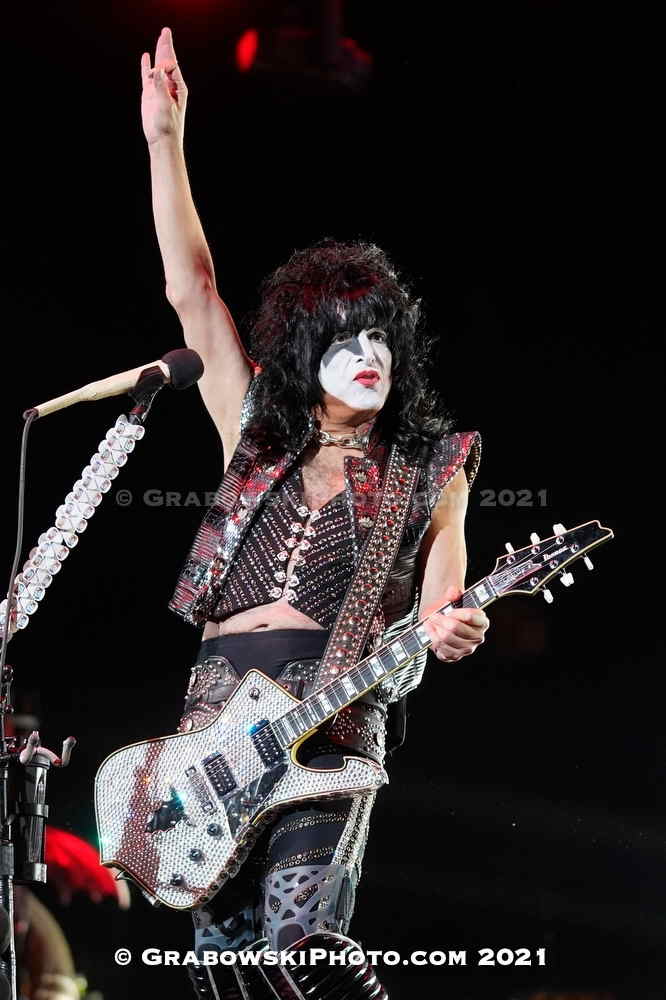 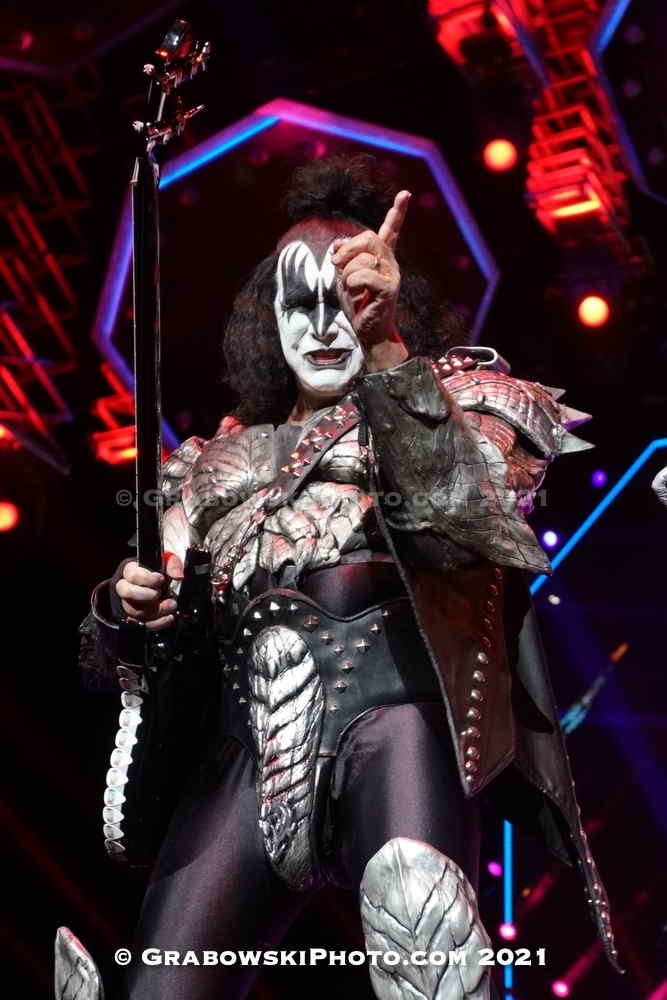