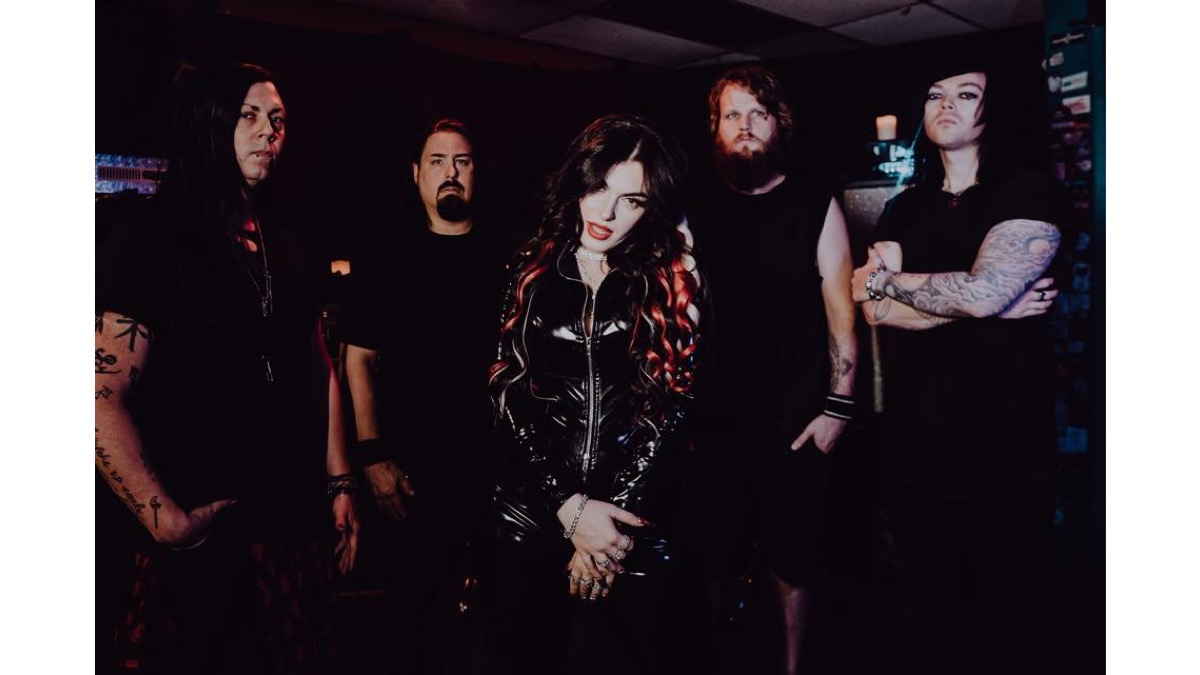 The Orlando Weekly, published in their home town, has named THE DEV "Best Rock Act" for 2022, an accolade they also took home in 2021. They rocked the socks off of the crowd at last year's Welcome to Rockville Festival in Daytona Beach, FL and already this year they've done some serious shakin' at the Kraken, the music fest that took place on their home turf in Orlando. The band ---Nikollaj Lleshi on vocals, Ryan Danley and Barrett Jones on guitars, John Panaccione on bass and Chris Caruso on drums --- is hell bent on showing their fans a good time. It's only fitting therefore that they're rocking new single and video is titled "Hell Bent." We asked the band about the making of the "Hell Bent" video; overflowing with wild imagery, the video is as much a treat for the eyes as it is for the ears.

Nikollaj: Shooting days for me are probably the most nerve-racking ones, but at the same rate they're the most fun things ever! As a lead singer and a person who is genuinely obsessed with creating luxe ensembles I definitely overthink music videos when it comes to what I'm gonna wear, because that image is going to quite literally be permanent. For "Hell Bent" I probably had the most fun just because there were so many moving parts like a stripper pole, being inside a pool and even Hummer scenes. It really allowed me to spread my wings and just go all out with my wardrobe more than I did with (previous videos) "Shameless Life" and "Queen of the Damned."

Barrett: Music video shoots are always a blast! With "Hell Bent" it was a chance for us to really show everyone what THE DEV is all about. A little behind the scenes secret: The dollar bills you see in the scenes with Nikollaj on the pole?
That's me out of camera range shuffling them in front of an industrial fan!

Chris: We had a blast! You know it's always a good time if the cops are called. Yes those are real cops in the video!

Ryan: The first day of shooting was easy because it was indoors in a controlled environment, but shooting the second day outside was a daunting task. Shooting a pool party in summer in Florida sounds great but it rains literally every day. But thankfully everything fell into place; no rain, barely any mosquitos and people showed up ready to party. Getting people to show can surprisingly be the hardest part of shooting. The fact that the cops got called on us made it that much more rock 'n' roll!

John: Shooting a music video is always a fun and challenging experience. We had a great time filming it and hanging out with our friends that came for the second day. The pool party scenes were just that; a pool party! Logistically it was tough to do everything we wanted but we were able to pull it off and put out a fun and sexy video which we are all very happy with.

THE DEV are just as enthusiastic when they talk about their experience at Kraken Fest.

Nikollaj: Amazing and nostalgic are two words that I would use to describe the Kraken Fest for me. As someone who always listened to Red Jumpsuit Apparatus and The Used, not only being able to play the festival but actually being able to share the stage with them was a very large moment for me. Most festivals can be hectic but I just feel like with Kraken it seemed as if I was getting to hang out with old friends, hearing all the songs that I would listen to when I was younger, and then actually getting to watch on the side of the stage. In comparison to other festivals that the band has played Kraken just seemed so much more personal.

Barrett: Kraken Fest was great! We're so thankful they asked us to play. All day we hung out and mingled backstage with all the other bands. I met and talked a little with Dan Marsala, the lead singer of Story of the Year. It was a goal of mine to play with The Used and Story of the Year. Growing up I had told myself that I would open for them one day. It's definitely a lesson to never give up and to realize that things you put out in the universe will only come when you allow them and when you're ready to receive them.

John: Kraken was a blast! It's always fun to play on the big stage and hang out and party with the bands and fans. I had a lot of fun performing and meeting everyone.

Chris: Being a metal head, I loved seeing We're Wolves and Evergreen Terrace. I even got to have a drink with them and Red Jumpsuit Apparatus. Everyone was on their A game; it was such an honor to play with all the wonderful bands at the festival.

Ryan: Festivals are always a fun communal day where you get to meet and see a lot of great bands. It was great to see The Used and Story of the Year kill it! I've been a fan of those two bands for years now. And I'm always stoked when catering has pizza and donuts for us!

THE DEV can no doubt look forward to lots more pizza and donuts in the future, and a lot more fans too. After all, they're hell bent to get 'em!

Watch THE DEV "Hell Bent" below: