The Songs of Bacharach & Costello Set For Release 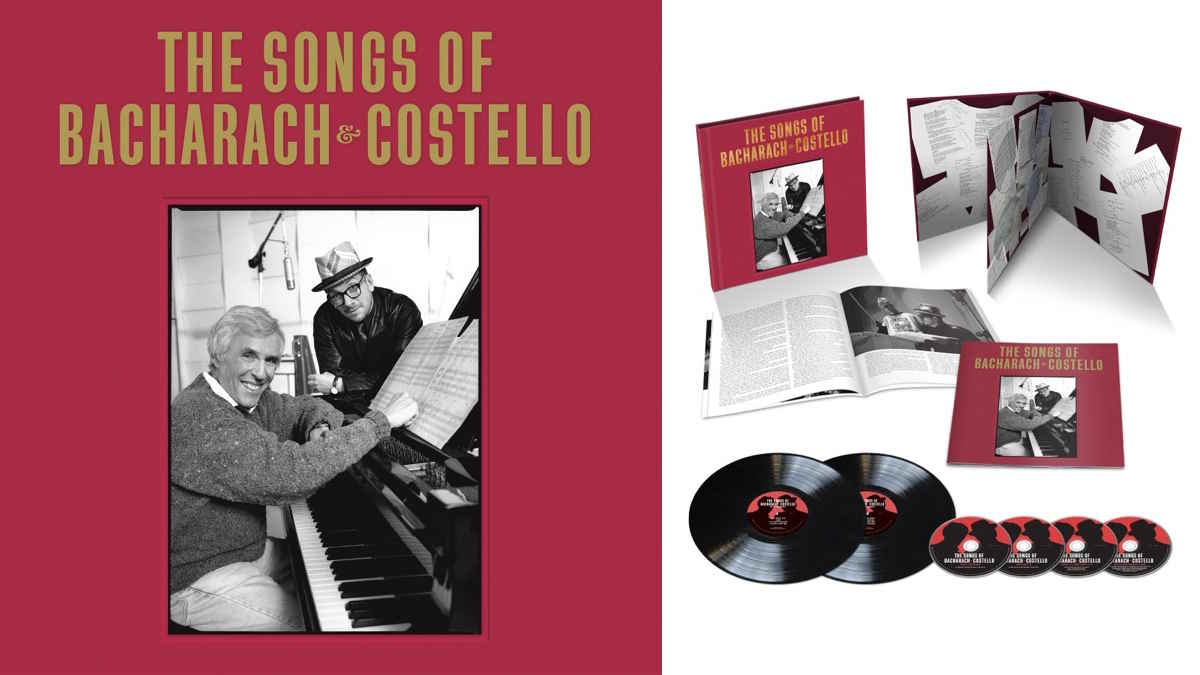 (UMe) The Songs of Bacharach & Costello, personally compiled by Elvis Costello, brings together all of the published songs that Costello has written with the legendary Burt Bacharach, one of the great composers of popular music in the 20th and now 21st Century.

Releasing March 3 via UMe, The Songs of Bacharach & Costello, celebrates a collaboration which began in 1995 and which continues to this day.

Those who were surprised by the writers of "I'm Not Angry" and "What's New Pussycat?" working together perhaps overlooked that Bacharach was engaging in musical collaboration for only the second time in his storied career - the first resulting in just a handful of songs musically written with Neil Diamond.

It was Costello who wrote the first musical draft of "God Give Me Strength," communicating from Dublin to Los Angeles by fax - back in the 20th Century - and far from being offended by this presumption, Bacharach sent back an amended copy, laying out the signature intro motif for flugelhorn, adding the expansive bridge section and making all sorts of subtle but crucial amendments to the melodic and rhythmic phrasing of Costello's first draft.

This song was a commission for the Allison Anders' motion picture, "Grace Of My Heart," and though both song and movie were overlooked by the Academy Awards, the song did place in the GRAMMY nominations of the following year, as Costello remarked in his book "Unfaithful Music & Disappearing Ink": "To have written a song like "God Give Me Strength" and simply stopped would have been ridiculous."

So began a series of face-to-face songwriting sessions in both California and New York City.

Their working methods ranged from one writer responding to the other's opening musical statement to Costello trying to put lyrical substance and definition to a complete Bacharach composition that did not need any such musical reply. By the end of their initial sessions, there were occasions when they were seated across the room at two pianos, writing successive bars of the new tune.

Recorded in Hollywood in 1998, the album, Painted From Memory - orchestrated by Bacharach with the exception of the title track which was arranged by the great Johnny Mandel - has gone on to capture an appreciative worldwide audience far beyond its initial release. The song "I Still Have That Other Girl" even managed to wrestle a GRAMMY away from both Celine Dion and Van Morrison - no easy task in the crowded field of the "Best Collaboration With Vocals" category of the 41st Awards.

The idea that the songs and lovelorn themes of Painted From Memory might be realized on the Broadway stage were perhaps an unlikely prospect, given that, as Costello puts it in his essay, such a show might feel, "Like Eugene O'Neill's "Long Day's Journey Into Night" only with less tap-dancing."

Nevertheless, this was the belief of dedicated Painted From Memory aficionado and television comedy mogul, Chuck Lorre, who together with Tony Award-winning writer, Steven Sater, set about threading a story through the original folio of songs, creating a tale and set of characters who demanded that Bacharach and Costello write more than a dozen additional songs.

Writing the lyrics of these new songs, Costello told us, "These reflect the stories and impulses of a group of people who are, obsessive and vain, who are betrayed and become disappointed in life but long tenderly for a happier time, who are unfaithful, dishonest, destructive and turn out to be the inventors of a dangerous past, who are guilty, haunted and romantically deluded, desperate, vengeful and even cruel."

"In their musical form they are different kinds of dark love songs that anyone might sing if they happened to be an artist, his model, a wife, a fantasist, a lover, a philanderer or disillusioned daughter.
You know, fun for all the family."

These songs are all found on Taken From Life, opening and closing with "You Can Have Her" and "Look Up Again," arranged by Vince Mendoza and recorded at Capitol Studios, Hollywood in September 2021 under the direction of Bacharach.

The Taken From Life collection also brings together performances on which Bacharach led The Imposters for the GRAMMY winning album Look Now, and songs from the proposed score from the E.P. Purse and the Decca Records release, The Sweetest Punch, on which guitarist Bill Frisell arranged the then brand new Bacharach/Costello songs for the voice of Cassandra Wilson and the clarinetist, Don Byron.

The Taken From Life title track is a 2022 recording with The Imposters produced by Sebastian Keys and the collection is completed by startling and beautiful vocal performances of other songs from the "Painted From Memory" musical score by Audra Mae and Jenni Muldaur with the piano accompaniment of Jim Cox and Thomas Bartlett, including the tragic, "I Looked Away" and the deranged catalogue song, "Shameless," just two of the 19 previously unreleased tracks included in the set.

Along with multiple lyrical drafts of "This House Is Empty Now" which reveal the harrowing disillusionment beneath the more measured tone of the finished lyric, pages from the draft script are also reproduced with pencil annotations proposing lyrical changes and even other unwritten songs.

Opportunities to see Bacharach and Costello perform on stage were rare. Their 1998 tour opened at Radio City Musical Hall, NYC and closed five shows later at the Royal Festival Hall, London, after just a handful of television and radio appearances.

However, Costello and Steve Nieve began the "Lonely World Tour" - taking its title from a line in the Painted From Memory song, "What's Her Name Today?" - opening with an appearance with the Swedish Radio Symphony Orchestra at Berwaldhallen in Stockholm on the Feast Of The Epiphany, 1999 and proceeded to place the Bacharach/Costello songs central to their concert repertoire from Toronto to Tokyo, and closing in Osaka on December 18th, in a concert in which forty songs were performed.

A selection of these performances can be heard on the third disc of the box set: "Because It's A Lonely World - Live."

Bacharach's songs written with his greatest lyricist, Hal David (as well as those written with Bob Hilliard and Mack David) were heard on English radio and television from his latter collaborator's earliest memories.

Costello's 10,000 word essay is illustrated by a number of photographs including detail from a shot of the entire company of the Royal Variety Performance of 1963, in which The Beatles - who had recently recorded Bacharach's "Baby It's You" - are seen flirting with Marlene Dietrich, whose accompanist, Bacharach can be found in the third row back, just four places along from Costello's father, Ross MacManus, who was also heard at the famous "rattle yer jewelry" show, singing with The Joe Loss Orchestra.

Aside from this strange coincidence that his father appeared on the bill with two songwriters with whom "Elvis Costello" would write more than thirty songs, Declan MacManus' upbringing was like anyone else who grew up in England during the early 1960s in that he lived in the shadow and under the spell of BBC Light Entertainment on which Bacharach/David songs were first heard sung by Cilla Black, Dusty Springfield or Zoot Money and The Big Roll Band before these renditions were chased up the hit parade by the "original" recordings by Dionne Warwick and many other great American vocal artists.

From his first concert hall dates with the Attractions as part of the "Live Stiffs" package tour in 1977, Costello turned to the Bacharach/David songbook for "I Just Don't Know What To Do With Myself," the first performance of a tune other than his own to make it on to vinyl.

The fourth disc of the box set, "Costello Sings Bacharach/David," traces the singer's relationship from that date through a duet with Nick Lowe on "Baby It's You," a version of "Please Stay" recorded in Barbados, all the way to a trio of Bacharach/David classics performed at the Royal Festival Hall in 1999, including "Make It Easy On Yourself," "My Little Red Book," and "Anyone Who Had A Heart."

Another studio collaboration yielded a rendition of "I'll Never Fall In Love Again" recorded for the Austin Powers - The Spy Who Shagged Me soundtrack, in which both artists made a cameo appearance.

Indeed this in turn led to exploratory workshops with Mike Myers for a possible stage adaptation of "Austin Powers" and further songwriting sessions with the Bacharach/Costello team completing or sketching up to fifteen more songs, one of which would have been a "secret track" back in this collection in the carefree days before algorithms ruled the waves but which is tucked on the end of the Taken From Life album, in the form of Bacharach's tender and intimate vocal and piano performance of one of the more unexpected drafted subplots - the song of a disillusioned spy entitled: "Lie Back And Think Of England."

Painted From Memory has been newly remastered for its 25th anniversary from the original tapes by Bob Ludwig at Gateway Mastering Studios. The new remaster is presented on CD as well as 140-gram 2LP black vinyl. Side D of the double vinyl showcases six songs from Taken From Life, including the three newly recorded compositions.

The comprehensive 45-song set also includes live performances of Bacharach and Costello performing several of the songs from Painted From Memory, as well as other beloved Bacharach numbers, with orchestras in New York and London; Costello performing stripped down versions of the songs on his "Lonely World Tour" with Nieve (the classically trained pianist and keyboard player in both The Attractions and The Imposters); and a selection of Bacharach and Hal David songs Costello has performed and recorded over the years, including "I'll Never Fall In Love Again," which Bacharach and Costello famously performed together on screen in "Austin Powers: The Spy Who Shagged Me." Housed in a lavish 12.75" x 12.5" box, the expansive set features a 20-page booklet with photography from William Claxton and Rankin, in and out of the studio, early drafts of lyrics, studio notes, pages from the "Painted From Memory" musical script, and a newly written 10,000-word essay by Costello that beautifully details his nearly three-decade long friendship and prolific musical partnership with Bacharach, and how influential the legendary songwriter has been throughout his life.

The Songs of Bacharach & Costello is being previewed today with the release of three rare and unreleased live performances from 1998 and 1999, including a stark and gripping "In The Darkest Place," recorded as a duo with Nieve at the piano in Australia on the Lonely World tour, and an arresting performance of "Painted From Memory," recorded in Stockholm, Sweden with Nieve and The Swedish Radio Symphony Orchestra. Finally, we hear Costello and Bacharach live with an orchestra at London's Royal Festival Hall, performing a sensational version of the latter's 1963 Dionne Warwick (and Cilla Black's) 1963 smash, "Anyone Who Had A Heart." Listen to the live tracks here.

Related Stories
The Songs of Bacharach & Costello Set For Release