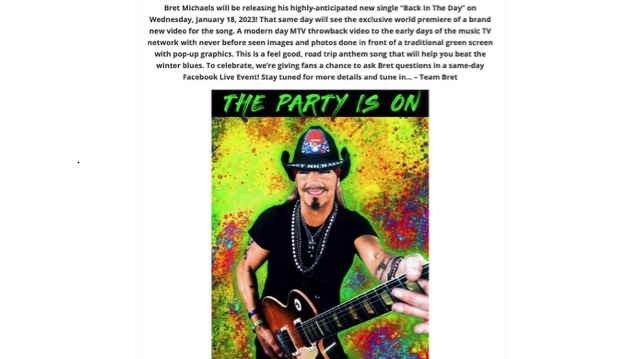 Poison frontman Bret Michaels has announced that he will be releasing a new solo single and accompanying music video called, "Back In The Day", January 18th.

His team describes the track as "A modern day MTV throwback video to the early days of the music TV network with never before seen images and photos done in front of a traditional green screen with pop-up graphics.

"This is a feel good, road trip anthem song that will help you beat the winter blues. To celebrate, we're giving fans a chance to ask Bret questions in a same-day Facebook Live Event! Stay tuned for more details and tune in..."

Bret spoke about the song during an interview with St. Louis radio station KSHE 95 last month. He told host, Guy "Favazz" Favazza, Michaels: "It's a throwback road trip anthem. I was driving in the car, and I'm driving along the beach, and as I'm writing this down... I do this crazy TikTok thing, and I show people how I write music. I said, 'Don't fear it, just lay down a beat...' I'm laying a beat, I'm playing the guitar, and I'm (singing) 'Back in the day, radio played our favorite songs the DJs'd say...' and it all hit me. The song just fell together. It's just a good-vibe song."