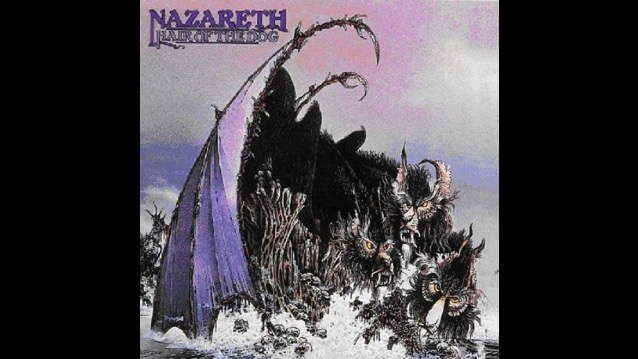 (hennemusic) was a top 22 story from November 2022: Legendary Nazareth vocalist Dan McCafferty died November 8 at the age of 76. "Dan died at 12:40 today," shared Nazareth bassist Pete Agnew on social media. "This is the saddest announcement I ever had to make.

"Maryann and the family have lost a wonderful loving husband and father, I have lost my best friend and the world has lost one of the greatest singers who ever lived. Too upset to say anything more at this time." No further details have been released at press time.

Agnew formed Nazareth with fellow Dunfermline, Scotland native McCafferty and guitarist Manny Charlton and drummer Darrell Sweet in 1968, after the foursome had previously played in the bassist's local band The Shadettes.

The group released its self-titled album debut in 1971, and eventually charted in the UK with their third record, 1973's "Razamanaz", and a pair of single from the project; a cover of the Joni Mitchell classic, "This Flight Tonight", from "Loud 'n' Proud" helped the group gain some international attention, but it was their version of The Everly Brothers' "Love Hurts" that proved to be their biggest hit, landing the band their one and only a US Top 10 single - and No.1's in Canada, the Netherlands and South Africa - while pushing 1975's "Hair Of The Dog" set achieve platinum status in the region.

The original lineup remained intact, with some additions along the way, until 1990, when Charlton exited the band; albums were issued regularly up until 1999, when Sweet passed away from a heart attack; Agnew brought his son, Lee, in to handle drums, and he remains an active member to this day.

McCafferty retired from the band and touring in 2013 due to health issues; read more and stream three of Nazareth's classic tracks here.