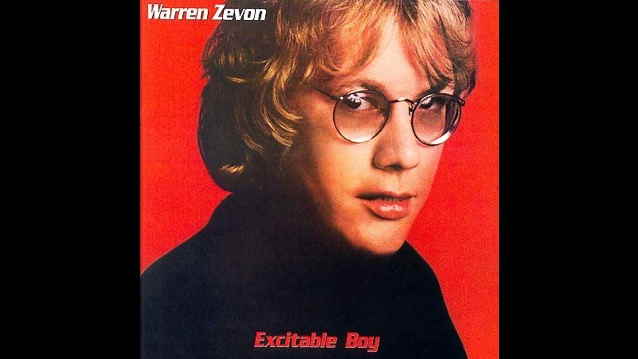 The 45th anniversary of Warren Zevon's "Excitable Boy" album is being celebrated by the syndicated radio show In The Studio With Redbeard: The Stories Behind History's Greatest Rock Bands.

Redbeard had this to say, "Even before he planted his flag in the awareness of mainstream rock fans with his third album Excitable Boy in January 1978, it turns out that I had been an admirer of Warren Zevon's songwriting talent almost ten years earlier. 'I wrote a couple of songs that The Turtles did that paid the rent for awhile. One was called 'Like the Seasons' and was the B-side to 'Happy Together', and the other was 'Outside Chance'.'

"By the time Warren Zevon's third album, Excitable Boy, was released in January 1978, he already had hits, albeit recorded by Linda Ronstadt at her career peak with Zevon's 'Poor Poor Pitiful Me','Carmelita', and 'Hasten Down the Wind'. But because the hit 'Werewolves of London' was most people's first impression of Warren as a performer, he was tagged unfairly with the 'novelty song singer' label. When it was first released, I remember having to reconcile several things about Excitable Boy, not the least of which being that several of the songs, at least for the times, seemed downright subversive!

"There was 'Roland the Headless Thompson Gunner', an unblinking yet tongue-in-cheek look at the shadowy world of mercenaries and gunrunners in third-world hotspots. The title song was a lighthearted romp through the anatomy of a psychotic serial killer, complete with girl group backup singers, while the raucous rocker 'Lawyers, Guns, and Money' was highly autobiographical, as we find in my classic rock interview.

"Yet on the same tune stack was Zevon's 'Tenderness on the Block', a first-person touching look at the loneliness of senior citizens. Not since John Prine's 'Hello in There' (somehow written when Prine was a mere 19) has a young songwriter, not yet old enough to have experienced a teenage daughter of his own coming of age, written so convincingly of an emotion about which he could not yet have had any personal knowledge.

"This year also marks the twentieth anniversaries of both Warren Zevon's final Grammy-grabbing album The Wind, as well as his premature death from inoperable lung cancer in 2003. Included here are three songs from The Wind including 'Disorder in the House', the new Republican congressional theme song, with Bruce Springsteen joining Warren on backing vocals; 'Prison Grove', an atmospheric, cinematic tone poem of despair; and the tender lump-in-the-throat 'Keep Me in Your Heart'.

"The paradox of the wind is that we feel its presence but can never touch it. The wind only touches us. Two weeks after it was released, Warren Zevon passed away on the wind." Stream the episode here.