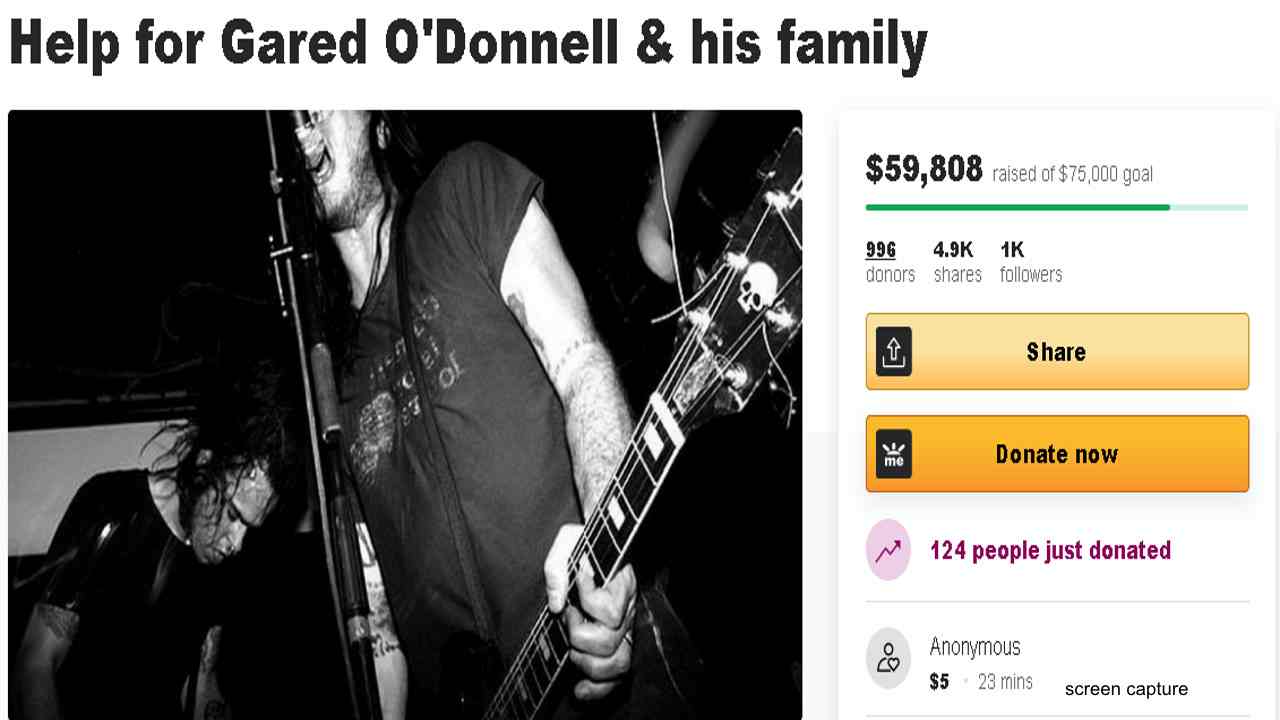 Planes Mistaken For Stars frontman Gared O'Donnell has been diagnosed with stage 3 esophageal cancer, which is currently inoperable, according to his friend Emily Francis.

Francis wrote, "I apologize in advance for those of you that know who I am posting about finding out this way but there are too many to call and time is of the essence. Please do not reach out to this person unless he reaches out to you as this is all overwhelming right now and he and his family are putting together the pieces trying to figure out all the details and the next steps.

"It guts me and breaks my heart to say but over the last couple weeks my brother and dear friend Gared O'Donnell found out he has stage 3 Esophagus Cancer. As of now the cancer is inoperable and he is going to go through the steps of chemo and radiation but they are still researching the best options. Gared and his family are also working on finding resources that might offer saving his voice, which many of you know is one of his true loves with singing in his band Planes Mistaken for Stars. This is a huge blow to him and his family but they are taking it head on / day by day as Gared does and he is going to fight the fight.

"Some of you know, some of you may not know but Gared and Planes Mistaken for Stars are the reason I am in the music industry. I was a shy girl in college trying to make friends and I met Planes at a basement show in Richmond, Virginia at the Strike Anywhere house. I was so shy I was too nervous to talk to anybody so I just hung in my corner and watched the world pass. Then a gal named Brandy came up and complimented me on something and made me feel welcomed. She said she was on tour with Planes and pointed over to a long haired, tattooed guy sitting in the shadows saying he was part of the band / the singer. Little did I know this man would help change my life forever and for the better.

"All of the band welcomed me with open arms and made me feel like I belonged somewhere immediately. They came through a few times and I would book shows for them and one of the times they convinced me to hop in my vehicle and follow them to the next show. Long and an amazing story short I didn't stop going on the road with them until about 2008ish.

"Gared and I grew very close over the years really seeing the world. I saw things that nobody will ever see in their lives. I have experienced things nobody will believe me if I told them. I know things about Gared that nobody would ever know and he knows about me that nobody would know too. He is my big brother and no matter how things are or where we are in our lives, he will always have my back. We had our good times and we had our really f***ing hard times. Tour managing the band was not the easiest of tasks but Gared, along with the rest of the band, taught me how to not take sh*t and stand up for what matters. The sh*t we saw you could write a whole series of novels on and that is even an understatement.

"After the many years of my big brother love, I came out of my shell and started to see the world for what it was. I saw life with a different set of lenses. I was pushed to never stop searching for the edge of time or to never stop letting the good times roll. Before becoming part of the family, I remember hearing End Me in Richmond for the first time. That song was so powerful and spoke to me in so many ways. THIS IS YOUR DOCUMENT YOUR LAST DANCE, SO F*** YOUR STANDING STILL. Gared helped push me to never stand still. He pushed me to love everybody and everything in a whole different way. He taught me that we only live once so grab life by the balls and push to do what you love no matter what.

"If you know me and love me, you will understand that this means the world to me for you to help out my big brother Gared. He is a pain in the ass (he knows that) but I love him for being that pain in the ass. If I never met him, I would not be here in a lot of your lives at the capacity I am. I would probably be working a graphic design job somewhere with A LOT less life experiences. I am reaching out because I need your help to help my brother. He not only changed my life, but has touched so many and he needs support now more than ever.

"As you all may know, medical treatment for anything in our country is not cheap. Nor are the flights, hotels, time off work, etc. Gared did not want me to do this at first but I feel we all need to stand up with him and help him fight this fight. We who know Gared love him with all of our hearts and now is the time we have his back and show our love and support because that is what family and the music community does.

"I am asking you all with the most humble of hearts to donate to this Gofundme and also share so we can raise as much as we can. I know times are rough for a lot of us due to the pandemic but every little bit can help. Whatever you can do, we will be so grateful.. Also - if you have any great resources from your experiences, please let me know and I will be more than happy to pass it on to him and his family. Even if you don't know him, please consider donating as this could be any one of us and we all have to stick together during the tough times.

"I will keep you posted with any news I hear and again please respect the privacy of the family at this time. Love you all and please keep Gared and his family in your thoughts."