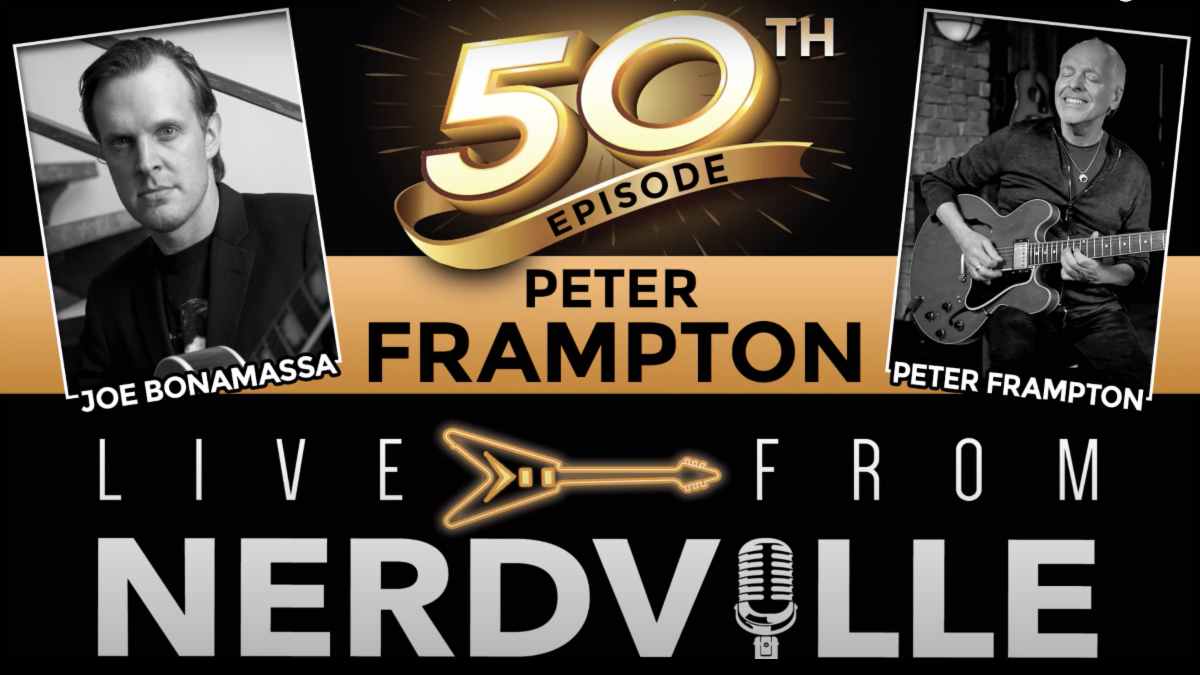 Joe Bonamassa recruited Peter Frampton for the 50th episode of his interview series Live From Nerdville and the show sent over the following highlights:

The convo begins with a discussion of labels versus indie, as the two go over the many pros and cons of both. After a slew of label conflicts in the early days, Frampton found success for his album Come Alive with A&M, which at the time was the biggest independent label.

Joe remembers, "You were the biggest thing in music! You were bigger than Sinatra and Elvis!" To which Frampton humbly replied, "I don't know about that!" Joe then goes on to ask Frampton what it felt like hitting number 1. "A #1 record was beyond all my dreams. A month or so later, I got the call that it's the best-selling album of all time. And in a year, I passed Carole King, I passed her record and that's when I got scared! I can have a #1 album and then, maybe a #15 album which is alright - I was told. Because I was that guy, and it continues with albums going immediately up to #1."

Frampton continues on to share how a string of successful albums then lead to a downfall because people got tired of seeing him and he too got burnt out. "The crash after going to the moon is that. It was hard obviously. It went down to owing more than what I had coming in. It's hard to believe but true!"

"Then to rebuild back from nothing - That's where I found the challenge again. I was down on the ground again and you should never stop paying your dues!" Peter says, then shares that Bill Gates once said that "Success can be the most dangerous thing for somebody! Because you can start to become arrogant and become the be all and end all." After the downfall, he realizes that he didn't change but the people around did.

Getting back to touring, Frampton joined David Bowie on the road in 1992. Joe and Peter have a conversation about what an icon Bowie was and how he would regenerate the music and fashion scene back then. Bowie also took him under his wing and toured the world and would re-introduce Frampton to his early fans.

"Bowie created a character for every album, and he was such a gifted writer and actor. People like Madonna, Prince and others followed his fashion and reinvented themselves same as Bowie did." - Frampton

Next up, they talk about how people nowadays come up with ways to look provocative especially with social media. As Joe puts "It's rebellion once again only now today they want likes, click bait and comments!" He goes on to say that he misses the early days of Rock 'n' Roll when boundaries were being pushed in many different ways. "Poking the bear to see if it gets upset by it."

Later the two dive into musical heroes. Frampton listened to his dad's music like Hank Marvin from The Shadows, and his melodic instrumentals, Django Reinhardt, Stephen Grappelli, Hot Club of France, Gypsy Jazz. Then his best friend Bill Wyman turned him onto Rowland Kirk, Miles Davis, Otis Blues, Rolling Stones West Montgomery, a lot of R&B and Blues. After this, it was Kenny Burrell, George Benson, Jack McDuff and Joe Pass and the list goes on and on. Blues Breakers, Hendrix Experience, Every Peter Green, Mick Taylor, aka all of "the school of John Mayall! Bonamassa agrees, "It was a very seductive side of music! The way that Eric and those guys took American Blues and made their own unique version of the Blues. In the 70s, the blues was dying in America and this guy Eric from the Blues Breakers comes here and reintroduces the blues to the Blues people. B.B. King always said that's why I have a career today (back in the day). It was also my gateway into the blues!"

Finally there's the story of the long lost black Les Paul. Honestly, Frampton considered it gone with the plane crash and had already written it off. He then goes on to tell how the black Les Paul was the only real guitar that he could play and that the others didn't feel right. Joe tells the story of how the guitar supposedly drowned at sea after a plane with all their equipment crashes into a fiery mess.

That night they were supposed to play in Panama, but we didn't have any equipment or instruments. Also, Noriega said that they would get shot if they didn't play. They get out of dodge via many different avenues and back to the U.S. The guitar is eventually found but it had to make a weird journey to get back to Frampton. He re-introduced it back into play during the 35th anniversary of Frampton Comes Alive concert! "The crowd went wild!" - PF

Lastly, he gives his thoughts on what advice he would give to a 20-year-old Peter Frampton. Watch the show below: