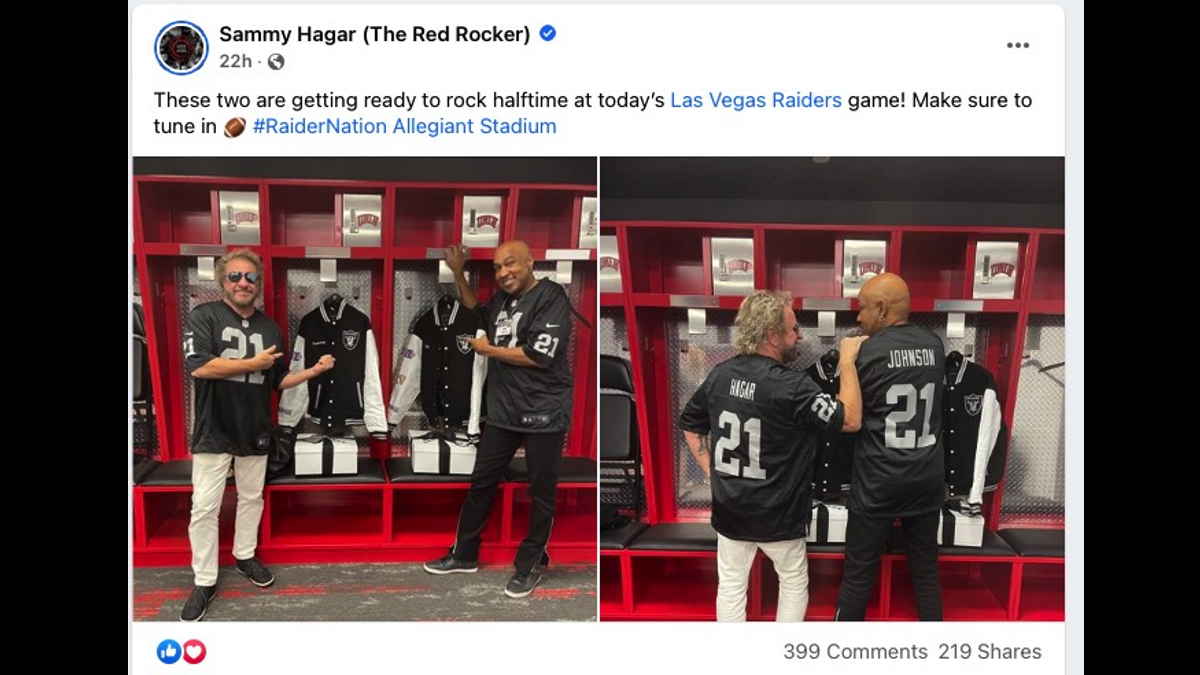 (hennemusic) Sammy Hagar performed at halftime during the NFL Las Vegas Raiders home game this past Sunday, November 21st, and fan filmed footage of the jam has been shared online.

The Red Rocker and guitarist Vic Johnson joined the Raiders House Band to deliver his 1982 single, "There's Only One Way To Rock", and Van Halen's 1991 classic, "Right Now", at the city's Allegiant Stadium.

According to the Las Vegas Review-Journal, Hagar's hits were the highlight of an otherwise lackluster afternoon for the home team, which was dumped 32-13 by the Cincinnati Bengals.

"It was like firing a bow an arrow, bam, man!" explained Hagar after the short but energetic performance. "It felt like it lasted three seconds. I feel good about it. Now, I have to sit down and figure out what happened. Did I just do that?"

Hagar was mobbed as he waded through fans at the end of the two-song medley at the Al Davis Memorial Torch. The rocker has been a regular fixture in Las Vegas these days: he and his band The Circle recently completed a six-show residency at the Strat Hotel, Casino & SkyPod (formerly known as the Stratosphere) and he's looking to do more.

"I want to come back to Vegas, I want to do more residencies," Hagar added. "I'd like to do half as many shows, and have the same amount of people, if you know what I mean. At my age, I'm not looking to do 100 shows a year, so I need a bigger venue.

"Vegas is the kind of town where I'm happy to bring fans, because they have so much they can do, I love this town. I really do dig this place."

Hagar and The Circle will close out their 2021 schedule with a four-show "A Toast To Texas" series that will see them perform in Forth Worth, San Antonio, Austin and Houston next month. Check out fan video here.