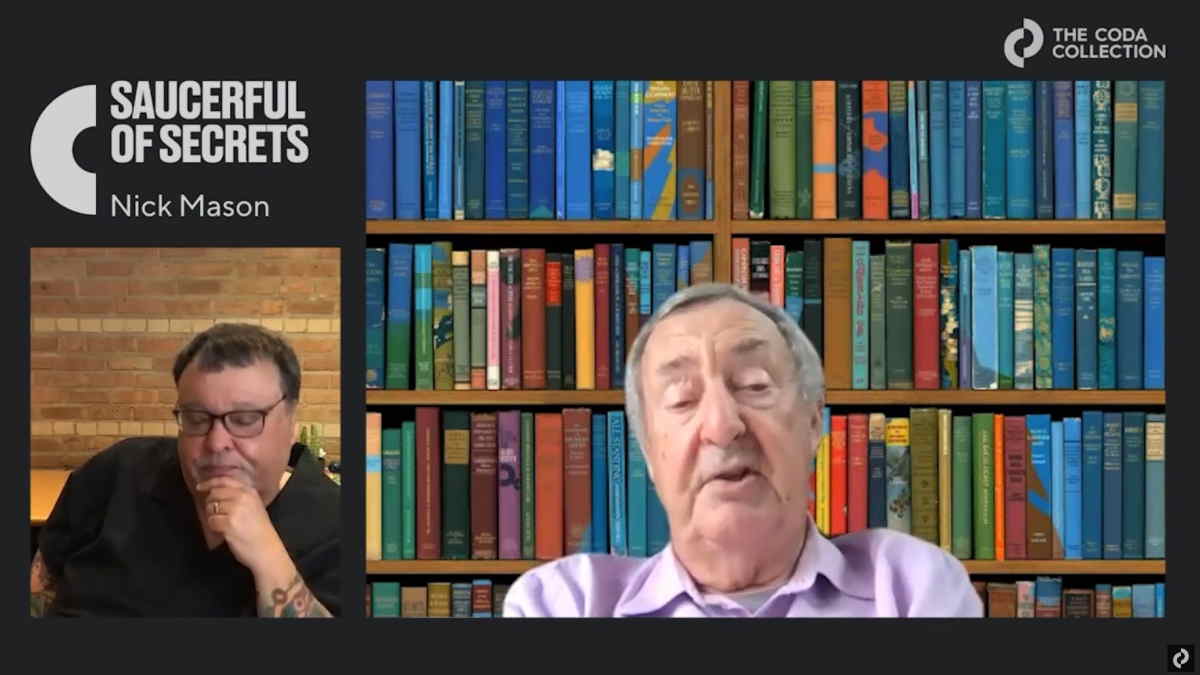 The Coda Collection have shared a brand new interview with Pink Floyd legend Nick Mason where he discovered a variety of topics in a career spanning discussion with Jim DeRogatis, including being "flabbergasted" by Roger Waters feeling that he was bullied within the band, Rolling Stones' Charlie Watts, returning to live performing following the lockdown and a lot more. We were sent the following excerpts:

On returning to touring in America, UK and Europe in 2022: All being well, we're going to start rehearsing the end of next week, in fact, with the idea of hopefully being in America the beginning of next year and UK and Europe after that. We don't do new songs. It's like going into an antique shop and saying, "I want something contemporary." No, we'd definitely like to increase the repertoire, though, for sure. There's a surprising amount of material there. The cut off is, up to, but not including Dark Side. And so with film tracks and early records and all the rest of it and singles, there's still quite a way to go. It's interesting as well, I think, that there is a difference between the USA and Europe, for sure. In that the Americans, I think because we were more successful in Europe, early on, and less so in the USA, so people are less familiar with the early records in America. And so you get people saying, "I've never heard this song. What is it?" And so on. Whereas in Europe, you're more likely to have people going, "Oh yeah, I remember that."

On artists covering Pink Floyd's music: I do really like it when people do cover our songs and do their interpretations of it. I'm always a little bit sarky about tribute bands, because I'd prefer to hear... I love Dub Side of the Moon, for the sort of reggae feel to the songs. And there's another one, Luther Wright and the Wrongs, who did The Wall as a country and Western album, I thought was terrific.

On virtual concerts: For me, [virtual concerts are] not the same, particularly for drummers, actually. They sort of operate in a real world thing, rather than on a Zoom call or whatever. I think there was much more a sense of, we've got to wait this one out and just get back as soon as we can.

On Pink Floyd co-founder Roger Waters feeling like he was bullied within the band: I'm slightly flabbergasted by it. But I think that's a slightly over emotional way of putting that there was some sort of division within the band about... Because Roger was always looking beyond the music, in a way. I think it was artificial, but I think possibly there was the side that wanted to do inflatables and films, as well as music, and those who just wanted to do music. But, I don't think they were mean to him, particularly. It's hard to imagine being mean to Roger. Stalin was the bullied.

On Charlie Watts: I didn't know Charlie well, at all, but I knew him a bit. He was absolutely delightful character and I just wanted to say something about what he provided, I suppose, to the band. Because one can get sort of a bit carried away with technique, particularly with drums in a way. No, actually all instruments, how fast can you play that arpeggio, whatever it is. And I think the reality is, very few drums ever play the sort of the techniques, the things that they can actually do, because part of the role of the drummer is to make it work within the context of a band. I don't think Charlie ever did a drum solo with the Stones. That says quite a lot, I think, because it wasn't necessary. What really mattered was to keep that groove going for the band. It's a little bit the same with Ringo, I think, that people underestimate just quite how good they are in that particular role. And frankly, the Beatles with Ginger Baker would not have been the same thing at all. I think it's important to recognize that.

On The Rolling Stones' longevity and the expectations of their fanbase: The Rolling Stones, a band that have done longer than anyone else. But it's certainly that they're not well-known for doing something totally different. And it's interesting, they are hide bound slightly by their fan base, who simply don't want, Mick, in particular, anything he tries on his own, the fans sort of try and shoot it down because almost like it feels as though you're not allowed to leave and work outside the band. I mean obviously it isn't quite that bad. But it is interesting that the brand is so strong that the fan base really don't want the apple cart upset.

Watch the Roger Waters clip below and stream the full interview here.