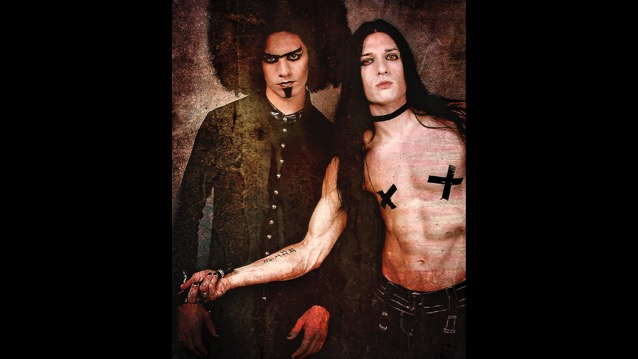 (TAG) Society 1 have announced that former drummer Dagon Destroyer will be reuniting with the band for their upcoming "Exit Through Fear" 20th anniversary tour.

A large portion of the dates will be on the "Rise Of The Machines" tour with Static-X, Fear Factory, Mushroomhead and DOPE. Additional shows are still being booked.

The band's most successful album, Exit Through Fear, which was
originally released on Earache Records made an impression in 2003 due
to the first music video of the album to feature lead vocalist Lord Zane performing body suspension. Drummer Dagon was featured in the video and did a large portion of the subsequent touring.

"I was 19 years old when we filmed our Nothing music video for the
album Exit Through Fear with Zane suspending over my drumset. The
tours afterward were insane. Everything about Society 1 was insane,
especially for a kid. It's surreal that we're joining forces again
after 20 years and that we're out with Fear Factory and Static-X. It's
a dream for me. These two bands are a huge part of my life." said
Dagon