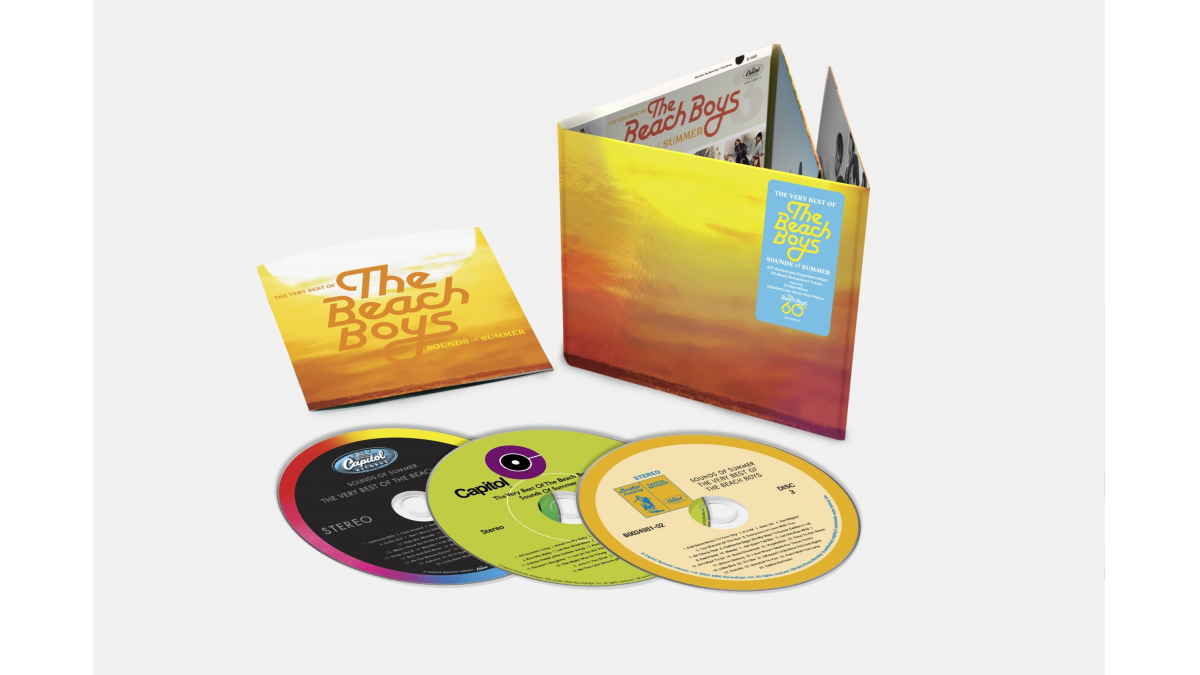 (UMe) UME have launched the pre-order of "Sounds Of Summer: The Very Best Of The Beach Boys" and the set is being previewed with the new stereo mix of "Good Vibrations" which is now streaming and available for immediate download.

Sixty years after first transmitting their good vibrations around the globe, The Beach Boys, the first American pop band to reach the 60-year milestone, remain one of the most legendary and influential groups to date, with their timeless music reverberating through modern culture today as strong as ever. In celebration of their 60th anniversary, UMe, the global catalog company of UMG, is pleased to be a part of some of the major initiatives planned to celebrate "America's Band" throughout 2022-23.

The Beach Boys said: "It's hard to believe it's been 60 years since we signed to Capitol Records and released our first album, Surfin' Safari. We were just kids in 1962 and could have never dreamed about where our music would take us, that it would have such a big impact on the world, still be loved, and continue to be discovered by generation after generation. This is a huge milestone that we're all very honored to have achieved. And to our incredible fans, forever and new, we look forward to sharing even more throughout the year."

UMe President & CEO, Bruce Resnikoff, said: "The Beach Boys have created some of the most iconic and beloved music of all time. An indelible and important part of America's cultural fabric, their timeless music has been a ubiquitous soundtrack for generations and continues to influence, inspire, and delight. We at UMe remain honored to further The Beach Boys' legendary catalog and look forward to celebrating them all year long along with their millions of fans around the world."

To kick off the yearlong celebration and provide the perfect summer soundtrack, Capitol Records and UMe will release a newly remastered and expanded edition of The Beach Boys career-spanning greatest hits collection, Sounds Of Summer: The Very Best Of The Beach Boys, on June 17. Originally released in 2003, the album soared to no. 16 in the US and stayed on the chart for 104 weeks. Now certified 4x platinum for sales of nearly four and a half million albums, the collection has been updated in both number of songs and audio quality, expanding the original 30-track best of with 50 more of the band's most beloved songs for a total of 80 tracks that span their earliest hits to deeper fan-favorite cuts and from their 1962 debut album, Surfin' Safari through to 1989's Still Cruisin'. 6 LP vinyl edition pre-order here (ad).

Assembled by Mark Linett and Alan Boyd, the team behind 2013's GRAMMY(r) Award-winning SMiLE Sessions and last year's acclaimed boxed set, Feel Flows - The Sunflower and Surf's Up Sessions 1969-1971, Sounds Of Summer features nearly every US Top 40 hit of The Beach Boys' incredible career, including "California Girls," "I Get Around," "Surfer Girl," "Surfin' U.S.A.," "Fun, Fun, Fun," "God Only Knows," "Good Vibrations," "Be True To Your School," "Wouldn't It Be Nice," "Kokomo," "Barbara Ann," "Help Me, Rhonda," "In My Room," and many others. Fifty additional tracks showcase a broad mix of songs from across their wide-ranging catalog with some of the many highlights including "All Summer Long," "Disney Girls," "Forever," "Feel Flows," "Friends," "Roll Plymouth Rock," "Sail on Sailor," "Surf's Up," and "Wind Chimes."

The collection boasts 24 new mixes including two first-time stereo mixes, plus 22 new-and-improved stereo mixes, which in some cases feature the latest in digital stereo extraction technology, allowing for the team to separate the original mono backing tracks for the first time.

The expanded edition of Sounds Of Summer will be available in a variety of formats, including digitally, a 3CD softpack, and as a Super Deluxe Edition 6LP vinyl boxed set on 180-gram black vinyl in two options - a standard set or a numbered, limited edition version featuring a rainbow foil slipcase and four collectible lithographs. Both versions will feature color printed sleeves that replicate the original "Capitol Catalog" sleeves that highlight the entire Beach Boys discography, and all formats will include a booklet with new liner notes and updated photos. The original 30-track version will also be available in its newly remastered and upgraded form on single CD or double gatefold LP on standard weight vinyl or as a higher-end limited edition numbered version pressed on 180-gram vinyl with a tip-on jacket and a lithograph.

Additionally, all 30 tracks on disc 1 of Sounds Of Summer have been mixed in immersive Dolby Atmos, joining the group's Christmas Album which was mixed in spatial audio and released this past holiday season, and continuing the initiative to present the group's catalog in the enveloping and exciting new audio format.

The timeless music of The Beach Boys will also be featured in several innovative official new music videos that are in the works along with a slate of lyric videos and visualizers to present these classic songs in the modern video era.

Following the release of Sounds of Summer, this fall Capitol/UMe will release the next chapter in The Beach Boys' archival releases, which will explore the bands often overlooked but pivotal albums, 1972's Carl and the Passions - "So Tough" and 1973's Holland. The deluxe multi-disc set follows last year's acclaimed boxed set Feel Flows - The Sunflower and Surf's Up Sessions 1969-1971 that topped many critic's year-end lists and chronicled and explored the metamorphic and highly influential 1969-1971 period of the band's [ career through tons of unreleased tracks, live recordings, radio promos, alternate versions, alternate mixes, isolated backing tracks and a cappella versions, culled from the album sessions. More details will be revealed at a later date.

Besides the new music releases from Capitol/UMe, The Beach Boys are also catching new waves by participating in a feature length documentary currently in the works, a tribute special, prestigious exhibitions and events, unique brand partnerships, and much more to celebrate their 60th anniversary.

Sounds Of Summer: The Very Best Of The Beach Boys - Expanded Edition
6LP