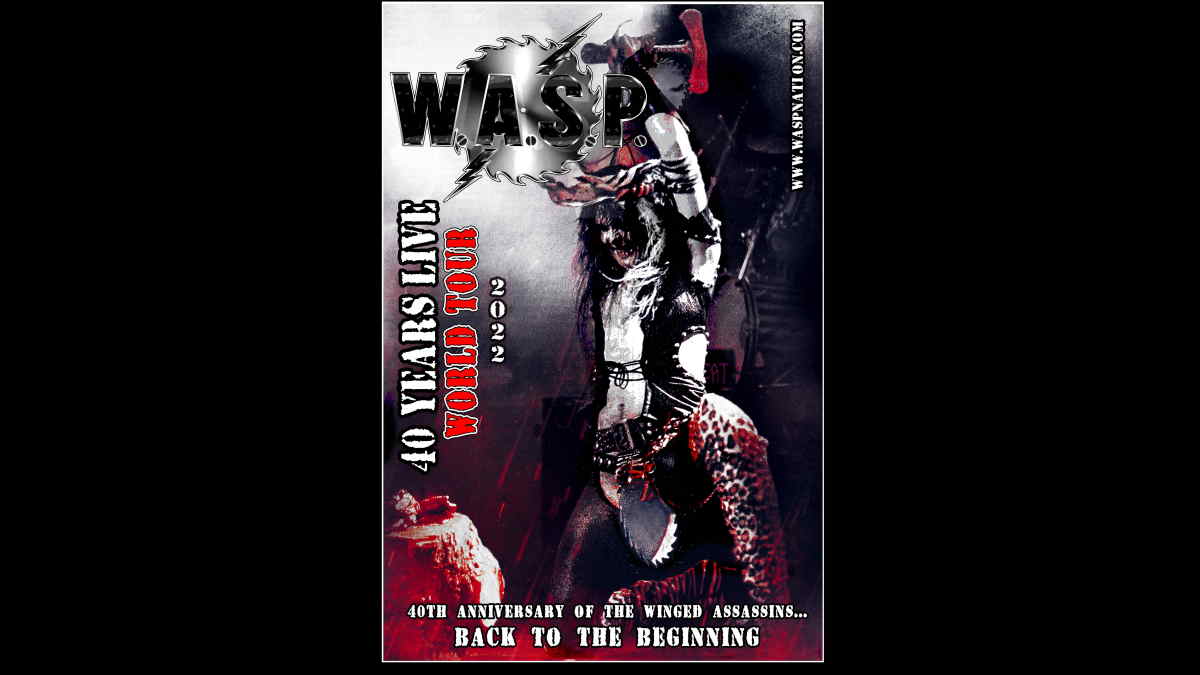 W.A.S.P. returned to the stage for the first time in two and a half years last month for two performances in Sweden and frontman Blackie Lawless has shared a length reflection on his return to live action.

He wrote, "It was December 2019, Sao Paulo Brazil, the last time we set foot on any stage of any kind anywhere in the World. Little did any of us know this same 'World' was about to dramatically change... for all of us!

"At that time we were busy preparing for what was to be the '1984 To Headless' World Tour. In late January 2020 James Hetfield was premiering his Custom Car Collection at the Petersen Car Museum in L.A. and being a vintage 'car guy' myself I was keen on going to check it out. There was a record amount of people attending the show. After taking pic's with a lot of the people there and talking music and cars it all seemed a great time was had by all.... until about a week later. One week later I thought I had come down with the flu and was feeling pretty rotten for about 4-5 days, but then it got worse every day for about 4 more days. Each day seriously worse than the one before. I'd never had anything like this ever happen before. And then I lost all sense of taste and smell for about 10 days. This too had never happened before. So I fought it for about 9 weeks and slowly over the news we start hearing about this strange new illness that nobody really knows what it is. Fast forward a few months and find I'd unknowingly been selected to become a 'Beta Tester' for this horrible new thing that didn't yet even have a name.

"Well everyone now knows how tragically it all played out all over the World. So let's recap the last 2 1/2 years. One global pandemic, One serious worldwide recession with gas prices spinning out of sight, and a monster sitting in the Kremlin deciding now is his time to retake and remake the old Russian Empire.

"Every single persons life was upended and quarantined into mass isolation with literally no where to go but sit and wait.

"But slowly life, as resilient as it has always been, reared its bloodied head and pushed forward one more time.

"So that brings us to Saturday night, July 23rd in Stockholm, Sweden. It's now been 2 1/2 years since we stood and played in front of an audience. We were seriously concerned about actually getting there. With all the flight cancellations, moving a band and crew and gear is challenging in the best of times. But now there are nightmare scenarios going on out there right now with airlines. But the flight could not have been better and band and crew and gear all arrived safe and ready to make sound.

"The longest break between shows I had ever done before in my life was a 3 year gap after touring the Crimson Idol in 92-93 and then to K.F.D. in 1996. But that was by design, this time it was not. But the funny thing was, when we got ready to do the rehearsals for the K.F.D. tour I had not played live or even been a rehearsal room with a band. I remember putting on the guitar for that first day of rehearsal and I thought, 'I have no idea how to do this anymore'. It was like I was in someone else's body with no clue how to play much less try to sing. That whole first day it was like I was walking around bumping into walls and the simplest of things was like I'd never done it before. But the 2nd day I started getting the hang of it again and the muscle memory returned pretty quickly.

"But although I expected it to be much the same as the K.F.D. rehearsals had been this time was totally different. Don't ask me why. This time the first day in rehearsals I put on the guitar and said to the guy's, 'wow, this is the first time I've stood up with a strap on since Sao Paulo'. Meaning all the guitar playing I'd done during the pandemic was sitting down in a studio. But then I ran back in my head what I had just said. I thought. 'I need to seriously rephrase that' and I told them, 'when I said I had not stood up with a strap on', it sounded like I said 'I hadn't stood up with a Strap-on since Sao Paulo'. Or sit down with one either for that matter. Talk about the ultimate Freudian Slip!

"Everybody in the room fell over laughing and from that moment forward playing all the songs was joy like I had not experienced in many, many years. Even when we got out on stage in Stockholm and being still totally jet lagged it was joy. The thing I'll remember the most was looking at peoples faces in the crowd. It's something I've seen so many times before but this time it was different. I saw happiness I had not seen in a long, long time and I don't think it was just me. What I believe I was seeing was a collective reaction by the everyone there and it was not like people who had been locked away for a long time, it was more of a collective sense of just joy.

"That's the best way I can describe it, just pure joy! I'm sure there's a lot to be said about 'absence makes the heart grow fonder' and I'm sure deep down on some phycological level we all knew it. And when I say 'we' I mean the band and the whole audience. But that's not what it looked like. It was almost like we were all doing it again for the first time and remembering what all those early shows we saw were all about.

"I'll take your faces with me for the rest of my life. And for that priceless gift.... Thank You Stockholm!

"After the first show in Stockholm we felt pretty good. Considering we had not been on stage in 2 1/2 years it all went pretty smooth. I don't care what anybody says, any Band, and I mean any Band, is going to feel that kind of hesitancy and apprehension after that long of a layoff. You wouldn't be human if you didn't feel that. But within just a song or two it was like we never left. The reviews were positive and the audience all seemed to dig it so we up and running once again.

"I would like to take a moment to explain that these 2 shows, as well as they were received, were never meant to be a representation of what the upcoming tour is going to be. They were festivals and our intention was to treat them as such. The upcoming 40th Anniversary Tour will look, sound and feel different than anything we've ever done before. That's not hype, THAT'S A FACT !

"We've been working on this presentation for a while now and I give you my word, this will be different than any other Rock Show we've ever done. On that note, I can say it's been a while since I was as excited about the elements of a show like what we're going to do this Fall. For the two Sweden shows we did not want to reveal anything that's going to be in this coming tour. I don't wanna keep you in suspense, but I'm sure you understand and I promise it'll be worth the wait. Personally I can't wait to get into rehearsals for this new show.

"The Skogsrojet Show was great. It was a little cold when we took the stage, but I like that because it's way easier to perform when it's cooler than being in a swampy sauna. It was also good to talk to some of the other Bands on the bill that we had not been able to run into in a long time.

"And then came the trip home. We got off stage at 1 AM in the morning and had to leave for the airport at 5:30 AM. After a 2 hour ride back to the airport in Stockholm and an 11 hour plane ride, from the time we got up the day before and the combined trip, we had gone 37 hours with zero sleep before we got back to L.A.

"It's like Ray Charles used to say, 'I don't get paid for playing, I get paid for traveling!'. Truer words have never been spoken.

"So Good Night Sweden - We'll See You Next Year.