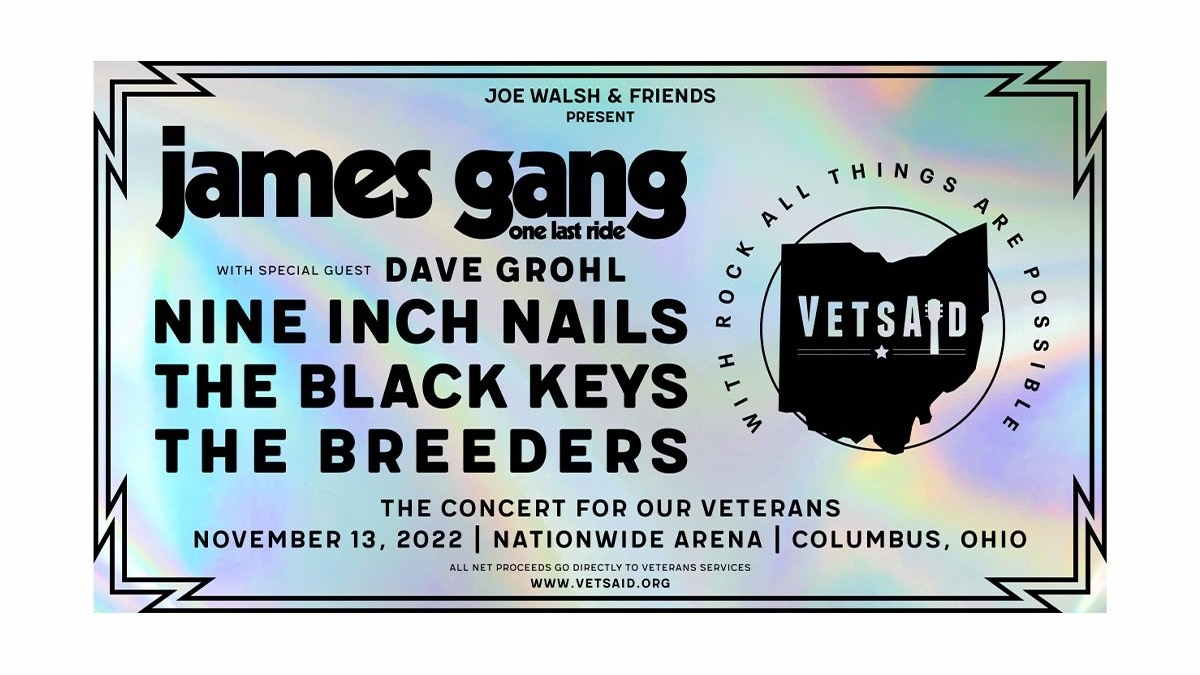 (Beautiful Day Media) Eagles guitarist Joe Walsh have revealed an impressive lineup for this year's VetsAid, that will take place at 6pm on Sunday, November 13, 2022, at Nationwide Arena in Columbus, OH.

VetsAid 2022 will feature sets from a newly reunited James Gang (Joe Walsh, Jimmy Fox and Dale Peters) for a final performance, or "One Last Ride," with special guest Dave Grohl as well as from Nine Inch Nails, The Black Keys and The Breeders.

The show will be hosted for the third time by Cleveland native Drew Carey. Tickets will be available and on-sale to the public on Friday, August 5, 2022 at 10am Eastern www.ticketmaster.com and be priced starting at $59.99.

Walsh's vision was to curate an all-Ohio bill for this year's show with all net proceeds to benefit Ohio veterans and their families. He considers Columbus to be his hometown, the James Gang and Nine Inch Nails hail originally from Cleveland, The Black Keys from Akron, The Breeders from Dayton and Dave Grohl is native to Warren, OH.

"It all started in Ohio," Walsh reflects. "Picking up my first guitar as a kid in Columbus set me on a musical journey to Kent State, Cleveland and then the world. Now it is a great privilege and humbling opportunity for me to share the stage once again with my original James Gang buddies and with this absolutely incredible group of Ohio rock legends like Trent Reznor and Nine Inch Nails, The Black Keys, The Breeders and Dave Grohl. I believe in Ohio and look forward to celebrating our musical legacy while honoring our veterans with VetsAid 2022."

Now in its sixth year, VetsAid hosted its inaugural show on September 20, 2017 with a concert at the EagleBank Arena in Fairfax, VA featuring performances by Walsh, Zac Brown Band, Keith Urban and Gary Clark Jr. In 2018, VetsAid traveled to Tacoma, WA with a sell-out event featuring Walsh, Don Henley, James Taylor, Chris Stapleton, Haim and special guest Ringo Starr. In 2019, Houston, TX welcomed VetsAid for a blockbuster show with Walsh, ZZ Top, The Doobie Brothers, Jason Isbell & The 400 Unit, Sheryl Crow and Brad Paisley. The pandemic moved the festival online in 2020 and 2021 with intimate performances from Eddie Vedder, James Hetfield, Gwen Stefani and nearly 40 other artists from across the United States as well as the debut of new music from Walsh in his studio available via livestream.

As every year, all net proceeds from the concert will go directly to the veterans' services charities selected through a vetting process coordinated in tandem with the Combined Arms Institute. To date, VetsAid has disbursed $2,000,000 in grants. In 2022 VetsAid plans to disburse grants exclusively to organizations based in Ohio or with operations on the ground in Ohio; grant applications are open now via the VetsAid website (www.vetsaid.org/grants).

Veterans and their wellbeing have always been important to Walsh, a Gold Star son himself. His father was a flight instructor for the first US operational jet powered aircraft, the Lockheed F-80 Shooting Star, and died while stationed and on active duty on Okinawa when Walsh was 20 months old.

Walsh aims to use this platform to raise funds and awareness for the still urgent and significant needs of our returning soldiers and their families. Through the establishment of VetsAid and this annual benefit concert, he aims to give back to those who have given so much in sacrifice for this country.