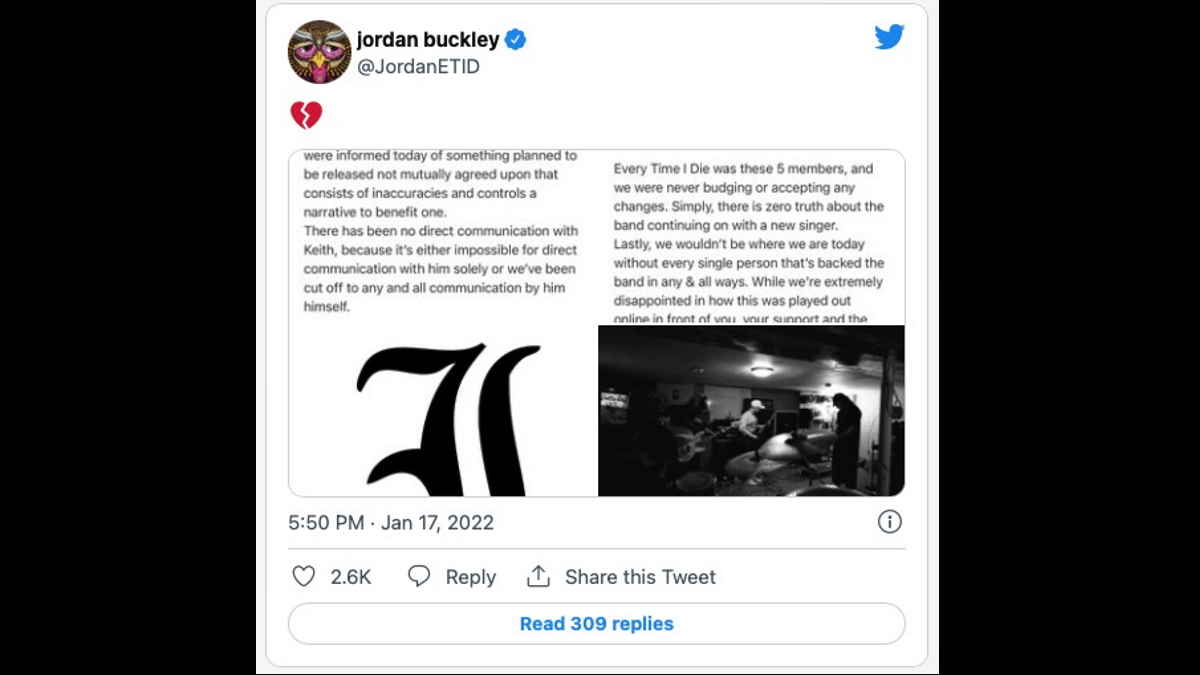 Keith Buckley opened up about his issues that caused friction within Every Time I Die, but he says that he did not see the surprise end of the band coming.

The band made headlines when the other members of the group, including his brother Jordan, announced that they had broken up. Buckley spoke about the surprise turn of events during one of his "An Evening With..." shows at Signature Brew in East London on Monday (February 7th), according to the UK outlet Metal Hammer.

Buckley told the audience, "The term 'artist' never came up in my family. We never referred to each other as artists, we just kinda existed. And it wasn't until I got sober that I realized that that artistic spark is fundamental to every venture that you do as a human being, and if that spark isn't there, then there's no energy to push you into the next thing.

"There's been something that's been driving me on. I think that it's an objective fact that Every Time I Die existed for longer than most bands, so there was something in that formula that was alchemic, that was completely singular to us. And I think it was the rivalry... I think it was just those two forces constantly battling which kept pushing the band along. And once I got sober, and I realized that that was a very antiquated way to power sh*t... [I thought] we don't need to push the band forward with negativity, we can talk about things now.

"I went to the band, and I went to the manager at the time, and I said, 'I f***ed up a lot'. A lot of it was because of my drinking, a lot of it was exacerbated by a co-dependent marriage, but I said I'm on to that now, now we can really just address the problems that aren't coming in from any outside sources, now it's us. That's all I ever tried to do.

"I really felt that that was a good thing good thing for everyone because I knew that there was friction between Jordan and I. There were a lot of things that happened during the pandemic that still haven't come out between he and I that led to this, there were multiple attempts at communication, therapy and everything. I love therapy... and I went to it, and I encouraged it for the band, but it was cut off, and I didn't know why.

"I just feel like I was looked at in bad faith. And I understand that, because I was an alcoholic and I did a lot of terrible things, and so it's easy to see someone who's constantly f***ing up their own life and just realize that every decision they make is gonna suck, no matter what... And I know that that bad faith filter had been put on for 20 years...

"All i hoped to do was get a clean start and say, take all those filters away and try to look at me now as someone who is totally changing the way they're living and thinking and speaking and interacting and communicating, and give it a chance: just pretend that I'm not the guy that you got used to. And they couldn't do it. And it broke my heart.

"On that [final Every Time I Die] tour... it was undeniable that I was performing better than I ever have. I was at the top of my f***ing game. And I did not see this coming... I was led to believe that everything I was doing was working for the betterment of the band.

"It's heartbreaking, heartbreaking. However, it is not the end of anything: I can't even say what the state of the band is right now.

"I don't know what the future holds but I know that, right now, this is exactly where I f***ing want to be, and I'm very thankful to be here."