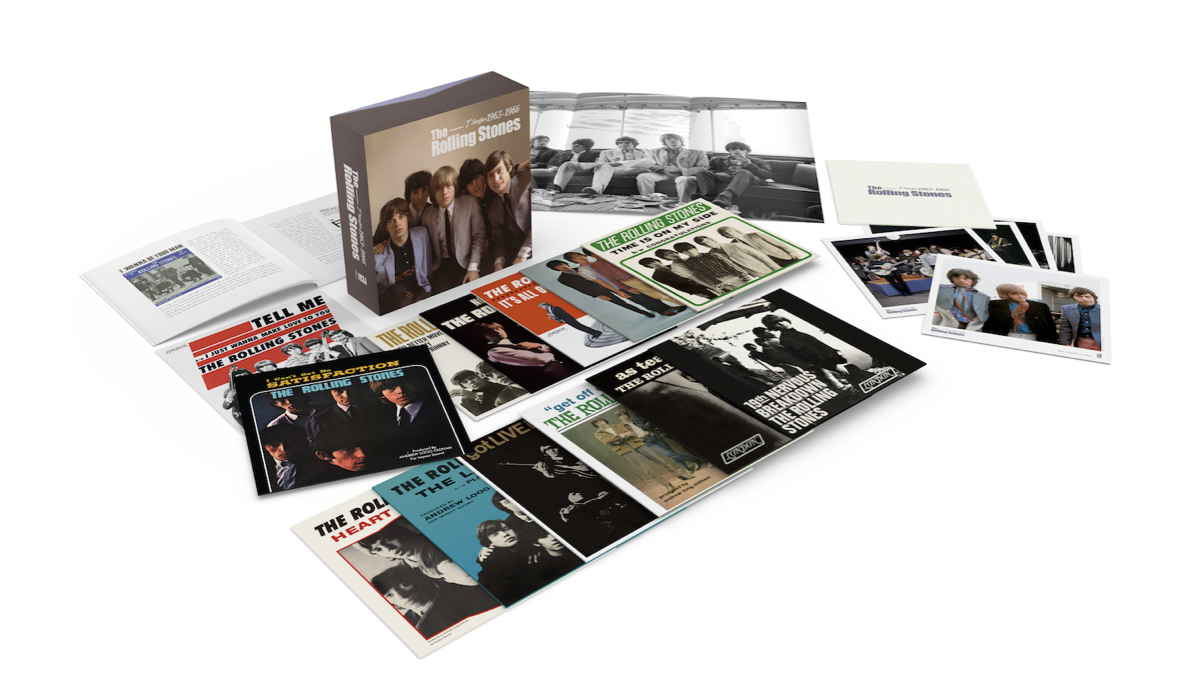 (m.f.h.) ABKCO Records have announced that they will release The Rolling Stones Singles 1963-1966 limited-edition box set on June 10th in celebration of the group's 60th anniversary this year.

The set includes reproductions of the first 18 7" vinyl singles and extended play records by "The World's Greatest Rock 'n' Roll Band," as originally released by Decca and London Records. The tracks are all remastered by 12-time Grammy Award-winning engineer Bob Ludwig. The set, replete with period-correct picture sleeve art, will also come with a 32-page book with extensive liner notes by Stones authority Nigel Williamson, as well as rare photos and ephemera plus a set of five photo cards and a poster, all housed in a hard-shell box. A companion second vinyl box set in the series, The Rolling Stones Singles 1966-1971, will be released next year.

Before they were thought of as one of the rock era's quintessential album bands, the Rolling Stones began their recording career in 1963 with a slew of singles that captured the energy and excitement created by the classic lineup of Mick Jagger, Keith Richards, Brian Jones, Charlie Watts and Bill Wyman. Their version of Chuck Berry's "Come On" backed with a cover of Muddy Waters' "I Want To Be Loved" kicked it all off, and was quickly followed up with "I Wanna Be Your Man," a song written by John Lennon and Paul McCartney for the Stones to use, before being recorded by The Beatles themselves. London Records, their US label, quickly withdrew the single on "moral grounds" due to the illicit implications of the B-side "Stoned" (credited to Nanker Phelge - the songwriting pseudonym for the entire band). None of the songs from these first two singles appeared on any of their albums.

The Rolling Stones Singles 1963-1966 follows the group's shift away from covers in favor of originals, due in large part to Jagger and Richards developing into one of the most accomplished powerhouse songwriting duos of their generation. Of the nine US Top 40 hits contained within the set, all but one are Jagger/Richards compositions. These include "(I Can't Get No) Satisfaction" and "Get Off Of My Cloud," which were number one hits on both sides of the Atlantic. This collection includes the US and UK versions of both these singles, which feature different sleeve art and B-sides. The sole Top 40 cover is "Time Is On My Side," (written by Jerry Ragovoy and notably recorded by Irma Thomas). The single in this collection is the lesser-known version which features an organ intro. Another rarity that never made it onto an album in any form is "Sad Day," the US B-side of the 1966 hit "19th Nervous Breakdown."

Three extended-play (E.P.) 7" records are included in The Rolling Stones Singles 1963-1966, all of which were originally UK-only releases. These are The Rolling Stones (not to be confused with the album of the same name) and Five by Five (recorded at Chicago's famed Chess Studio at 2120 South Michigan Avenue), both released in 1964, as well as 1965's Got Live If You Want It! - the first of many live records by a band that to this very day is known as an explosive concert attraction.

Preorder is available here (ad) and the full track details can be seen below:

The Rolling Stones E.P. (originally released January 1964)
Side A:
Bye Bye Johnny
Money
Side B:
You Better Move On
Poison Ivy

"Not Fade Away" (originally released February 1964)
Side A: Not Fade Away
Side B: Little By Little

"Tell Me" (originally released June 1964)
Side A: Tell Me
Side B: I Just Wanna Make Love To You

Five by Five E.P. (originally released August 1964)
Side A:
If You Need Me
Empty Heart
2120 South Michigan Avenue
Side B:
Confessin' The Blues
Around and Around

"The Last Time" (originally released February 1965)
Side A: The Last Time
Side B: Play With Fire

Got Live If You Want It! E.P. (originally released June 1965)
Side A:
We Want The Stones (Live)
Everybody Needs Somebody To Love (Live)
Pain In My Heart (Live)
Route 66 (Live)
Side B:
I'm Moving On
I'm Alright